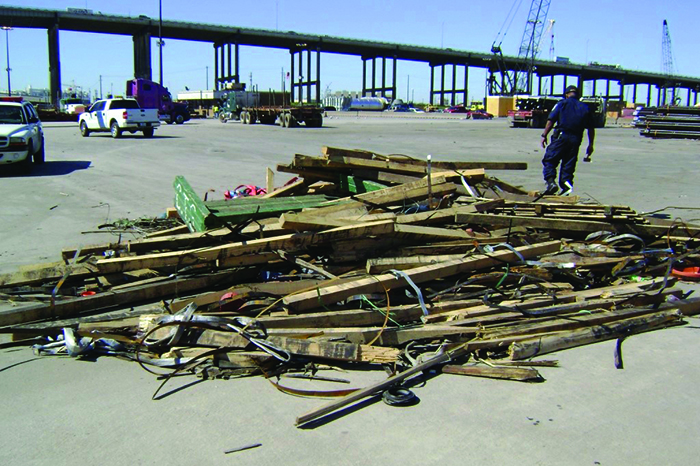 Project and breakbulk shippers often feel battered and unsure of where to turn in the face of expensive re-exportation requirements for wood packaging materials (WPM) they thought were in compliance with phytosanitary measures aimed at keeping invasive pests out of the United States.

“It’s unfortunate” that importers are liable when infested WPM forces re-exportation, with all of its attendant costs, says Osama El-Lissy, deputy administrator of Plant Protection and Quarantine with the Animal and Plant Health Inspection Service (APHIS), an agency of the US Department of Agriculture (USDA). “The supplier and the exporter should be liable or responsible. The importer does not have control at the importing end of this. The exporter should be reaching out to the NPPO [National Plant Protection Organization] of that country where the commodity was sourced, and making sure that the WPM is in compliance. The bottom line is that [the USDA] wants to facilitate trade, and we are willing and prepared to do whatever it takes to help and work with them,” he said.

But importers say when treated and apparently compliant WPM nonetheless fails inspection, they face a lack of alternatives, feedback, and proactive sourcing information from enforcement officials.

“Both sides want compliance. [The industry] is willing to do what it takes, but they don’t know what to do,” Dominic Sun, director of trade development with the port of Houston, told JOC.com.

One of the primary goals of Lake Shore Associates, a group formed to help address the effects of the International Standards For Phytosanitary Measures No. 15 (ISPM 15) on US breakbulk and project cargo imports, is to help importers be more selective in terms of loading ports when it comes to dunnage and WPM. Another is to create a Houston-based solution, such as a USDA-approved incinerator, that would allow for an option other than re-exportation, at least for dunnage. Currently there is only one USDA-approved incinerator in the US, on the Delaware River, that can be used to dispose of non-compliant dunnage.

The Delaware incinerator, a pilot project, represents a “common-sense approach” to ISPM 15 enforcement, El-Lissy said. If infested dunnage is found, “Do you reject the entire shipment? In theory, to completely safeguard, we reject, but in practice it doesn’t make sense,” he said, adding that it will be at least six months before the pilot is complete and APHIS is able to study the data and assess the safety of the project.

Peter Svensson, senior vice president and head of Clipper Americas, said that the industry is paying close attention to the tests at the Delaware incinerator. Disposing of infested dunnage there is expensive, but “not as expensive as re-exporting,” he said. If an incinerator is available, “the ship does not become a hostage.”

The port of Houston has spoken to several terminal operators in the ship channel about possibly establishing a Houston incinerator, Sun said. “The importers are very frustrated,” he said. “They are wanting to comply, and yet infestation is found in the WPM and dunnage … We are looking at correlations, at whether current ways of treating are sufficient. Should it be done at a higher heat? For a longer time? Right now, yes, there is frustration, because they are following the mandate but inspectors are still finding infestation.”

“We never get to see the evidence,” Svensson said. “We can’t track back to the source. I don’t get to see the [infested] piece of dunnage … How can I go back to my supplier?” Clipper loads more than 1 million metric tons of steel out of Antwerp annually and is looking at alternatives to wooden dunnage such as reusable plastics and rubber. The carrier currently spends $2 million buying dunnage per year and another $1 million disposing of it.

“All of our dunnage is physically inspected by two people before being loaded aboard our ships in Antwerp,” Svensson said. “What are we doing wrong? What are you [US Customs and Border Protection (CBP)] doing differently that our people are missing?” Given more feedback, Svensson said he could go back to his team and tell them exactly what to look for.

While industry members may believe they are already being proactive, importers must emphasize to their subcontractors that they source WPM from reliable sources that have a good understanding of the ISPM 15 requirements, said John Sagle, director of Agriculture Safeguarding, Agriculture Programs, and trade liaison with CBP.

“CBP has an open door,” Sagle said. “We encourage [industry] to get boots on the ground on the export side, to do intensive research on supplier compliance and potential gaps in ISPM conformance. We will see where these investigations go into what is causing this. Is it a treatment issue? Is there potential for more pre-emptive inspection? That’s a good best practice.”

Complicating matters, neither USDA nor APHIS provides a public-facing list where industry members can find information on compliant or non-compliant WPM providers. “Importers need to call the NPPO for the exporting country. Typically, that is the Ministry of Agriculture or the Department of Agriculture for the nation, the quarantine authority within that country,” El-Lissy said. The importer or concerned party would say that they have a shipment coming into the US and that they want to be sure any WPM used poses no threat. “So no, there’s no central database, but this is how to get information.” There is also no public information available on emergency action notices (EANs) or re-exportations.

When non-compliant WPM is found during ISPM 15 inspection, action is taken against the bill of lading, Sagle told JOC.com. “That is the common denominator that we have to work with,” he said. This can be particularly problematic in the case of project cargo, where many thousands of freight tons, all related to a time-sensitive project, can be on a single bill of lading.

“What can we do as importers to be better protected and get a more reasonable response from the government? Is it reasonable to quarantine [and re-export] the entire shipment, or just [the segment of cargo affected by] the wood packaging?” asked one engineering, procurement, and construciton (EPC) cargo owner adversely affected by re-exportation.

In some instances where infestations were found, the importers have been able to work with ports, revise the bill of lading, and re-export only the affected portion of the cargo, Sagle said. “It depends on how the cargo is stowed or packed, and if there’s dock space such that would allow separation to occur. Can the port take this on? It can be proposed at the port level … the importer of record and/or their customs brokers then work with port and facilitate the request. So, if there is cargo that is clearly non-associated with any kind of wood crating or boxes, something completely separated from the issues, the bill of lading can be revised and the cargo separated.”

However, revising a bill of lading in this way could trigger tariff issues. When initially importing, using separate bills of lading for the various pieces of cargo is not a viable solution, the EPC cargo owner said. “You don’t do that on the same vessel with the same shipper. You don’t make multiple entries. You are importing main equipment and all the parts that go with it, claiming low duty. You’ll pay astronomically more if you import the cargo separately. It’s a whole unit disassembled for transport, and that’s how it has to be brought in.”

Sun said a few importers have broken down individual parcels into separate bills of lading, which could also help them know which vendor to penalize for non-compliance. However, he also noted that once the cargo is broken down, customs no longer deems the importation to be part of one specific project, and it may then be subject to separate tariffs, making it much more expensive to import.

Like every other industry member who discussed issues with enforcement of ISPM 15 rules with JOC.com, Svensson emphasized that he and his company wish to protect the US from dangerous invasive pests. “I don’t want to turn around and not see any trees. But we need [CBP and the USDA’s] help,” he said. “We want to have a fruitful conversation. Not yelling or in attack mode, but, ‘Let’s have a talk. This is a problem.’”

Diana Davila, Houston-based director of projects with UTC Overseas and chair of an Exporter’s Competitive Maritime Council committee on ISPM 15, said shippers “don’t want to import the beetles, but we need to make sure it doesn’t keep happening, and also to ensure that all of these findings are going somewhere. What is [the USDA’s] next action, beyond just penalizing the receiver? It’s not just the USDA. It’s IPPC [the International Plant Protection Convention]. How does that information get back to the IPPC? Who is actioning on this and how do we follow up with that?

“How do we know who the perpetrators are? What can we do about them?” she asked. “There is a lack of transparency. We have to get to the root cause.”

I find it very one sided when

Global Shipping Outlook: A Sneak Peek at 2021
Port Performance North America: Managing Cargo Flow During a Pandemic — and Beyond
END_OF_DOCUMENT_TOKEN_TO_BE_REPLACED