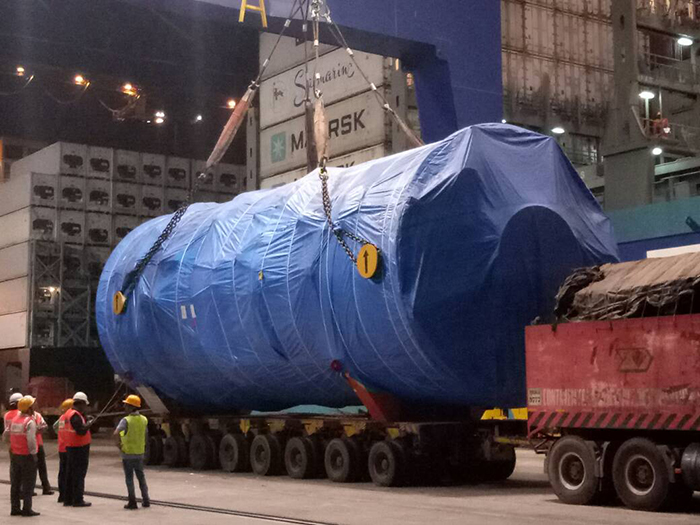 India's breakbulk and project cargo trade growth, propelled by a resurgent domestic manufacturing sector and other pro-business government reforms, has become a “sweetener” for container carriers struggling to fill up their large vessels with niche freight in the wake of continued lackluster demand in other global markets.

Dominant carriers, particularly Maersk Line, have had a spate of oversize cargo loadings at Jawaharlal Nehru Port Trust (JNPT) and elsewhere, involving complex inland logistics and quayside operations. JNPT handles the majority of India’s container freight and is the focal point of long-haul calls to and from the emerging market economy.

In an interview with JOC.com, Steve Felder, Maersk’s managing director for South Asia, said the overall outlook for “special cargo” exports from India remains buoyant and that this segment currently accounts for about 130,000 TEU, growing at a compound annual growth rate (CAGR) of 9 percent.

“By all indications and depending on the demand for projects — particularly in emerging markets — this growth is set to continue,” Felder told JOC.com.

He also said India has made tremendous progress across the board in port infrastructure development in recent years, and, as a result, most key ports have overcome perennial congestion problems.

While that improvement has aided special cargo handling, much more needs to be done regarding rail capacity and digitization of cargo procedures, according to Felder. “For the special cargo segment, the critical issues faced by shippers are infrastructure and operation-related hurdles such as roads, operational capabilities in the ports, handling logistics, etc.”

On the rail front, Maersk expects the dedicated freight corridors (DFCs) under construction, involving billions of dollars in public investment, to significantly improve connectivity between hinterlands and coastal regions. With the multifaceted Sagar Mala port-led development program under way, the carrier sees a “varied pace of [other project] implementations” to support faster freight movement.

“Digitization is in many respects in its infancy in the Indian supply chain context, in comparison with many countries. We would like to see more progress in this regard, particularly creating a common platform for the supply chain community to exchange data, eliminate paperwork, reduce handoff points, and improve data quality,” Felder stated.

Further, he said the revamped central digital platform — the port community system — that went live Dec. 11 is a step in the right direction, but there is still plenty of room for further technological advancements.

He also said project cargo logistics remains extremely challenging, especially for effective stowage/voyage planning and precise quayside operations, citing a 79-metric-ton out-of-gauge shipment that Maersk handled a few months ago at JNPT as one such operation. The Antwerp-bound cargo was loaded onto the Maersk Guayaquil from DP World’s Nhava Sheva (India) Gateway Terminal (NSIGT) and was said to be one of the heaviest cargo lifts at the JNPT harbor. “With our strong expertise within this segment, coupled with our short transit time and multiple weekly departures, the customer can look forward to new levels of improvements to their supply chain,” Felder said.

“The shipper had faced immense operational issues bringing the cargo to the port. Moreover, the slings provided by the shipper were not adequately accounted for and needed a last-minute replacement with chains. [Despite] the challenges, we executed the cargo movement on the same vessel as planned,” Felder added.

“Optimism in the market stems from the fact that the investment cycle is showing improvement, and the scenario augurs extremely well for the breakbulk, heavy, and project cargo movement,” Hegde said.

US LTL carriers see ‘gradual’ improvement in dismal May