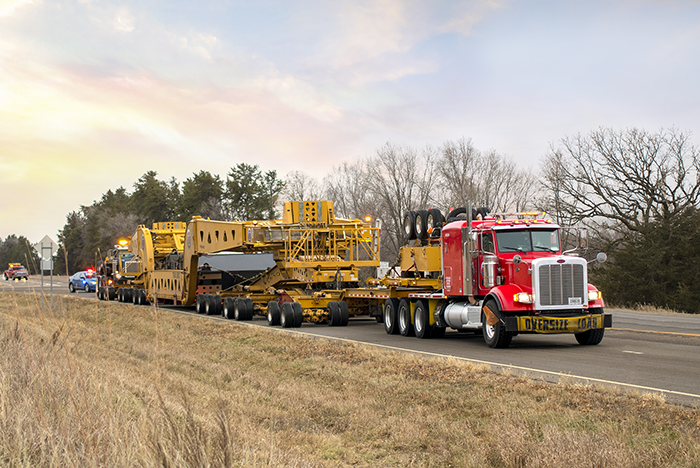 The lack of a national standard for oversized cargo transportation permitting in the United States is putting unnecessary burdens on heavy-lift carriers and their shipper customers, according to truck operators and permit consultancies.

Depending on the states, counties, and municipalities traversed, the cost and timelines for securing permits for moving oversized and/or overweight (OS/OW) loads can vary widely, with wait times ranging from minutes to months, or even years. And depending on the weight and dimensions of a given shipment, local law enforcement or private escorts may be required within certain jurisdictional borders, further pushing up project costs.

On one end of the spectrum, Joanna Jungels, permit manager at Minnesota-based Anderson Trucking Services (ATS), told JOC.com her 20-person team secures 6,000 to 10,000 OS/OW permits every month to move project cargoes across the US by road. Average issuance time is just under 1.5 minutes. In 2015, ATS set a record of 121,000 permits secured in a single year, she said.

At the other extreme, it took two years to secure OS/OW permits to move four expired reactors weighing 1.6 million pounds (726 metric tons) each from the shuttered San Onofre nuclear plant near San Diego to a nuclear waste dump in Clive, Utah, according to Wes Mollno, CEO and founder of the permitting consultancy WCS Permits & Pilot Cars.

Mollno, who works with departments of transportation in all 50 states, noted that permitting fees vary just as widely. In California, for example, trucking permits cost $16 “across the board,” he said, while in Oklahoma and Wyoming they can run upwards of $4,000 for a heavyweight load.

With this in mind, a group of transportation providers and manufacturers led by the Specialized Carriers & Rigging Association (SC&RA) is calling on all 50 states to harmonize and automate their OS/OW permitting processes. Dubbed UPT2021, the initiative is aimed at convincing the 12 states still processing permits manually to join the other 38 states that already offer some form of automating permitting or are in the process of implementing such systems, said Steven Todd, SC&RA’s vice president of transportation.

According to a joint study by the SC&R Foundation and the American Transportation Research Institute, OS/OW cargo transportation costs increase 45 percent to 82 percent when moving through and around so-called barrier states, where “regulations are extremely dated and not based on any empirical data or evidence,” said Todd.

The OS/OW permitting process can be a revenue producer for the issuing government entity, but according to Steven Todd, vice president of transportation at the Specialized Carriers & Rigging Association (SC&RA), the regulatory goal is to ensure safety and efficiency.

The “thriving market for wind energy, which is expected to continue throughout 2020, is putting a strain on our industry,” including creating periodic shortages of equipment and drivers, Todd told JOC.com. With heavy-lift trucking capacity harder to come by, a more streamlined permitting process would benefit “all OS/OW carriers, not just those moving wind superloads,” he said.

“Superloads,” a term commonly used in the heavy-haul industry, refers to an OS/OW shipment that surpasses a given state's definition of routine permit limits. However, therein lies the problem: The very definition of a superload varies from state to state. Even specifications for “megaloads,” commonly defined as any load that takes up two lanes of traffic and cannot fit under bridges, are subject to state-by-state definition.

“There is no uniformity from state to state, on everything from axles allowed to tire weight,” said Ed Bernard, president of Precision Specialized, an Ontario, Canada-based hauler of power generation and liquefied natural gas (LNG) equipment. Some states allow 65,000-pound cargoes on a three-axle combination, for example, while other states set a maximum of 60,000 pounds. And if the route goes through two adjoining states, adjustments must be made on the road to remain in compliance throughout the journey, he said.

“I can move a 185,000-pound shipment from Toronto to Baltimore, but I can’t take that same load into Texas [because it allows] less weight per axle,” Bernard told JOC.com.

Rob Simon, vice president of heavy haul for Bennett International Group, a Georgia-based logistics and transportation company, said the revenue element for states and local government further complicates the issue. “We have challenges with cities, counties, and local municipalities who are all getting into the game of issuing permits,” he said. “They are in it for the revenue, which only exasperates and also complicates the process.”

Bernard said the high degree of variation in OS/OW transportation regulations and the amount of time and effort needed to secure permits creates unnecessary latency within a transportation plan. “Indiana takes an extremely long time to issue a permit — five to 10 business days depending on the load, or sometimes longer,” he said.

“We’re moving at speeds faster than [state] governments because we are adapting to the larger loads,” added Jungels. “When we look at state regulations, quite a few of them are obsolete for the freight we’re hauling today. Some of those regs were written 30 years ago, and states are more stringent today in enforcing them on overweight and oversized loads.”

Another senior executive at a heavy-haul trucking company who asked not to be identified told JOC.com that deviations in weight and size restrictions, permit delays, and the inaccuracy of suggested routes provided by state transportation departments make the process “extremely frustrating and wasteful.” For certain exceptional loads — e.g., long moves traversing multiple states — the carrier will either turn down the business or subcontract it out, rather than deal with the different regulations and permitting processes, he said.

Bob Weyers, general manager for heavy transport with Bragg Crane, said that although some states are updating their permit issuance systems, wait times can still vary depending on the route. California’s Department of Transportation (Caltrans), for example, has partially digitized its permitting system, allowing heavy-lift operators to secure permits for certain pre-approved routes in under two hours via an online portal. However, getting the permits to move the exact same load on a non-Caltrans designated route could take as long as 30 days, Weyers said.

By comparison, Weyers said the neighboring states of Arizona and Nevada were able to issue permits for similar OS/OW moves in 1.5 days and 3 days, respectively. “Actually, California isn’t too bad compared to Texas, where a 220,000-pound load could take five weeks for a permit,” he added.

Jungels said some states still require motor carriers to fax in permit requests, but 33 states have introduced some form of automation, and “some are really rocking it. I can get a load assignment and a permit the same day.”

On the flip side, however, some non-automated states “have a mandatory three-day wait for loads over 150,000 pounds and 125 feet long,” she noted. “Even if the road is clear, they want three days.”

Getting the green light for an OS/OW load from a local municipality can be even more challenging in some instances. “They are definitely not staffed up for the bigger, higher-value loads today,” Jungels said. “You use the phone, you Google, but you don’t know what they need until you get a hold of them. It takes time.”

Fifteen years ago, when Jungels started requesting permits, only five local municipalities, excluding California towns, were requiring them. “Now we have over 1,100 on our records and the list keeps growing,” she said.