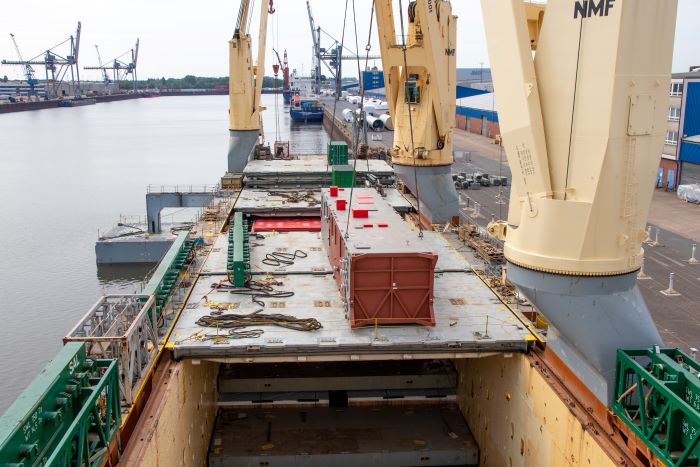 Russia's winter ice has melted, unlocking the Amur and Zeya rivers in the country’s Far East and allowing phase three of a massive five-year transport project for the $55 billion Gazprom Amur gas processing plant to get under way.

The SAL Trina has loaded six cold boxes weighing as much as 284 metric tons (mt) each and other over-dimensional and general cargo in Bremen, Germany, and Aviles, Spain, for the project. The ship left Spain June 2 and will steam via the Suez Canal to De-Kastri port in Russia's Far East, arriving in mid-July, according to Malte Steinhoff, head of marketing and communications with Harren & Partner, the Bremen-based parent company of both Combi Lift and SAL.

Eight tugs and seven barges purpose-built by heavy engineering transport company Combi Lift for the project have been released from winter storage in Khabarovsk, on the Amur River. The Gazprom cargo will be transshipped to these barges at De-Kastri. Four of the tugs will be deployed on the Zeya, and four on the Amur, Steinhoff told JOC.com.

One of eight Combi Lift tugs is launched at Khabarovsk, Russia, on the Amur River, after winter storage. Photo credit: Combi Lift.

It takes about 21 days to make the 2,371 km (1,473-mile) journey from De-Kastri to Svobodny, the discharge point on the Zeya River near the Gazprom Amur construction site, according to a statement from Combi Lift.

During a second voyage later this summer, the SAL Regine — similar to the Trina a 12,000-dwt heavy-lift vessel with combined lift capacities up to 1,400 mt — will carry a 850-mt demethanizer, a 883-mt NRU column, and other over-dimensional cargo from Masan, South Korea to De-Kastri, according to Combi Lift.

The Power of Siberia

Total freight volume for the 2020 phase of the project is 27,328 freight tons. Over the course of the five-year project, Combi Lift and SAL will move more than 176,000 freight tons for client Linde, a German industrial manufacturer, according to Combi Lift.

Linde builds facilities for and supplies industrial, process, and specialty gases. At Amur, Linde is providing process equipment for the cryogenic recovery of helium and other petrochemical substances. Gazprom Pererabotka Blagoveshchensk, a subsidiary of Gazprom, is managing the project, and NIPIGAZ is general contractor, according to the project website.

When complete, Amur Gazprom will deliver natural gas to China as part of the “Power of Siberia” pipeline project. It will be one of the largest gas processing plants in the world, according to the project website, with an output capacity of 42 billion cubic meters annually. Power of Siberia is part of a larger $400 billion agreement for Russia to supply China with natural gas, according to business publication Forbes.

Combi Lift recently ordered a “mega barge” from Damen Shipyards, headquartered in the Netherlands. Damen also built the tugs and barges being used in the Gazprom project. At 111.75 x 26.4 meters in width and length, the mega barge will be twice as large as those now in service on the Amur and Zeya. The new barge will be used on a project in eastern Russia, the company said. Further details are not yet available, Steinhoff told JOC.com.