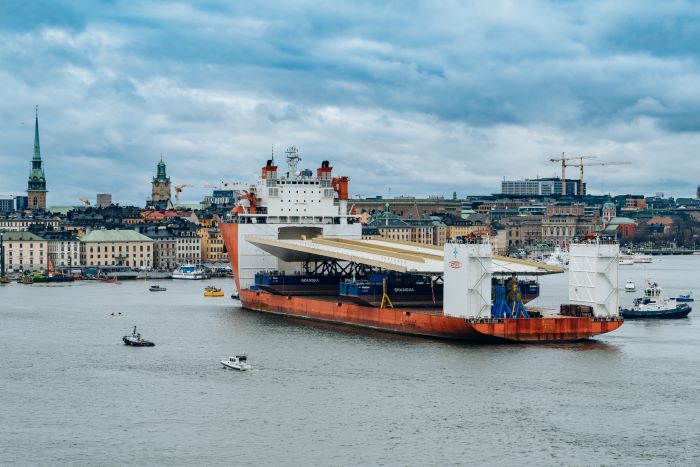 Leading Chinese heavy lift operator Cosco Shipping Heavy Transport has seen the spot charter market for semi-submersible and heavy lift vessels grind to a halt amid uncertainty driven by the collapse in oil prices. But Peter Hansen, the company’s president, told JOC.com that infrastructure-related and contracted cargo movements are offering a bit of a lifeline.

Cosco in March overcame bad weather and stringent navigation restrictions to deliver a 469-foot-long bridge to the center of Stockholm, Sweden, from southern China.

To move the bridge, Cosco chartered the 50,352 dwt semi-submersible heavy transport vessel Zhen Hua 33, owned by Shanghai Zhenhua Heavy Industries Company (ZPMC) and typically used to transport the port cranes that Zhenhua manufactures. The ship brought the 3,700-metric-ton bridge more than 12,700 miles, from the fabrication yard at Zhongshan near Hong Kong to the Slussen transportation hub in Stockholm city center, according to Cosco.

Delivery was delayed because of bad weather, including 30-foot-plus waves in the Bay of Biscay. The ship was forced to anchor off the southern coast of Spain and Portugal for about a month until conditions improved.

The Zhen Hua 33 needed special dispensation from the Swedish Maritime Administration to transit the Stockholm archipelago, according to a statement from GAC Sweden, which managed delivery of the SEK 198 million ($19.5 million) steel bridge for Cosco. The almost 148-foot wide structure exceeded the Stockholm archipelago’s width restrictions by more than 65 feet.

“We began by researching the ship’s specifications – engine power, rudder type, wind trap, bow and stern thrusters, and so on,” Björn Fischer, GAC Sweden deputy managing director, said in the statement. “This we then shared with the Swedish Maritime Administration to enable them to create a model to find a way to handle the passage with the help of simulator technology.”

The SMA issued the permit, but with stringent conditions. Transit could only occur in wind speeds of less than 10 to 12 meters. The permit also required two pilots, minimum visibility of no less than one nautical mile, and a daylight transit through the busy waterway.

The oil price crash is causing ripple effects in the heavy transport sector. “In the spot market no one wants to make any decisions, and of course on the energy side things are delayed or canceled,” Hansen said.

Planned oil and gas projects worth billions have been thrown into doubt as oil prices are undermined by the coronavirus 2019 (COVID-19) pandemic on the demand side and the Saudi-Russia oil price war on the supply side. The price of benchmark Dated Brent dipped below $20 per barrel this week — a number not seen in nearly two decades.

Despite the becalmed spot market, Hansen said Cosco's involvement with Chevron's Tengizchevroil (TCO) module transportation project has also kept the company active. “We have been quite busy with the TCO project, but do have some openings,” he said.

TCO is a Kazakhstan joint venture between Chevron, ExxonMobil, KazMunayGas, and LukArco that is developing massive oil fields in the Caspian region. TCO is already under construction.