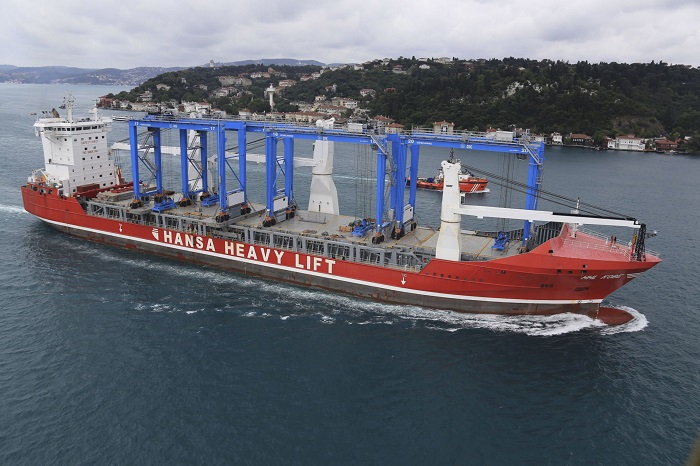 Founded in 2011, Hansa Heavy Lift (HHL) was the successor to Beluga Shipping but struggled to gain a foothold in the heavy-lift market as the global shipping crisis worsened. (Above: The HHL Kobe.) Photo credit: HHL.

Heavy-lift ocean carrier Hansa Heavy Lift (HHL), which rose from the ashes of Bremen-based carrier Beluga in 2011 after a dramatic collapse, has been forced to close its global operations.

Christoph Morgen, with Hamburg-based Brinkmann & Partner, has been appointed preliminary insolvency administrator. He is in talks with HHL’s banks and with World Fuel Services, which has had four of HHL’s vessels arrested, according to the European maritime press. The first arrest, of the HHL Elbe in Rouen in December, precipitated the bankruptcy filing.

California-based equity fund Oaktree Management, which controls funds that owned HHL, has withdrawn financial support, noting that stubborn structural challenges in the project carrier sector have made business consistently difficult. Founded in 2011, HHL was the successor to Beluga Shipping but struggled to gain a foothold in the heavy-lift market as the global shipping crisis worsened.

Beluga Shipping: the back story

HHL began life in 2011 when Oaktree Capital retained approximately 20 Beluga Shipping vessels and about 50 core staff members and started life over after Beluga’s fall, part of a drama that epitomized the heady excitement and devastating collapse of a shipping empire during a boom-and-bust market — a story that is still not completely over.

In the early 2000s, Beluga Shipping was headed by charismatic founder and CEO Niels Stolberg and operated a fleet that at times numbered more than 70 multipurpose and heavy-lift ships. In 2010, Oaktree Capital joined Beluga as a partner and invested about $280 million in loans and equity into the company. Within months after joining Beluga, Oaktree called in authorities to investigate massive financial irregularities they’d discovered at the shipping line.

Oaktree ousted Stolberg, declared bankruptcy, and triggered financial turmoil across a number of one-ship KG companies that had chartered ships to Beluga. The KGs were tax-favored German investment vehicles with shares owned by thousands of private retail investors. HCI Capital immediately withdrew 20 vessels out of the Beluga fleet and canceled its contracts. The ships were transferred to Hammonia Reederei, jointly owned by HCI, Peter Döhle, and GE Transport Finance. Blue Water Capital and Oltmann also transferred their vessels out of Beluga. In all, about 40 ships were quickly removed from the Beluga pool.

After the restructuring, Oaktree created HHL and was able to retain a core fleet of about 20 vessels and about 50 former Beluga staffers. Original plans were to enlarge the group through fleet and company takeovers, but these ideas never came to fruition. Hansa operated a fleet of P-series and F-series heavy-lift vessels, but struggled to gain a foothold in the heavy-lift market as the global shipping crisis widened after the recession. Fleet overcapacity and the 2016 oil price collapse hammered the project shipping market just when recovery appeared to be possible. Specialized carriers such as HHL, banking on transporting energy-related cargo in the tramp market, were hit hard.

In early 2018, after many delays and a lengthy and complex trial in Bremen, Germany, Stolberg, now in ill health, was convicted of fraud and embezzlement, according to Fairplay, a former sister publication of JOC.com.

More specifically, Stolberg was found guilty of deceiving lenders over Beluga’s capitalization and over the true costs of numerous multipurpose vessel (MPV) newbuildings contracted between 2006 and 2010, according to Fairplay. Prices were inflated by as much as 2.5 million euro ($2.85 million) per ship to create a cash-back and equity gain for Beluga Shipping. This was reportedly not an unusual scheme in the industry at the time, when the market was booming, but others who did the same thing were not caught because the loans were repaid in time thanks to the strong (pre-recession) market, according to Fairplay. Stolberg was also convicted of faking cargo contracts worth more than 300 million euro in order to persuade Oaktree Capital to invest in Beluga back in 2010. He was sentenced to three and a half years in prison and to responsibility for damages totaling more than 2 billion euro.

During the mid-to-late 2018, rumors spread that Bremen-based carrier Zeamarine was in talks to purchase the struggling HHL, but the transaction failed to materialize. Zeamarine is an important part of a trend toward consolidation at the specialized end of the multipurpose/heavy-lift (MPV/HL) fleet, i.e., vessels with at least a minimum of 100 metric tons (110 tons) of lift capacity.

As of late 2018, there were about 900 vessels in this important segment, including HHL’s, according to Drewry Maritime Research. The carrier’s website, still online in January 2019, described its P-series vessels as capable of lifting from 800 metric tons to 1,400 metric tons, while its smaller F-series can lift from 300 metric tons to 360 metric tons. How many vessels remain under the bankruptcy official’s control was not clear as of early January. The administrators declined to say in the European press, and estimates from press and industry members vary widely — from five to none to 11 to 13.

Zeamarine was formed in May 2018 as a joint venture (JV) between Zeaborn and Houston/New Orleans-based MPV/HL carrier Intermarine. The JV operates a fleet of approximately 85 vessels with lift capacities up to 1,400 metric tons, has several newbuildings ordered, and is ambitious to increase its fleet size further. Zeaborn, established in 2013 and based in Bremen, Germany, became a major player in the MPV/HL sector through the 2017 acquisitions of Rickmers-Linie, the heavy lift/project cargo unit of the financially troubled Rickmers Group, and of the German ship management company ER Schiffahrt. It also owns MCC Marine and NPC Projects.

Other key players in the specialized MPV/HL market include BBC Chartering, which is based in Leer, Germany, and normally operates about 170 MPV/HL vessels, and Bremen-based Harren Group, which owns SAL and Combi Lift. Other important players are China-based COSCO Heavy Transport; Jumbo, which partners with BBC Chartering, and BigLift/Spliethoff, all of which are based in the Netherlands; Thorco, based in Denmark; AAL, based in Singapore; and Chipolbrok, headquartered in Poland and China.