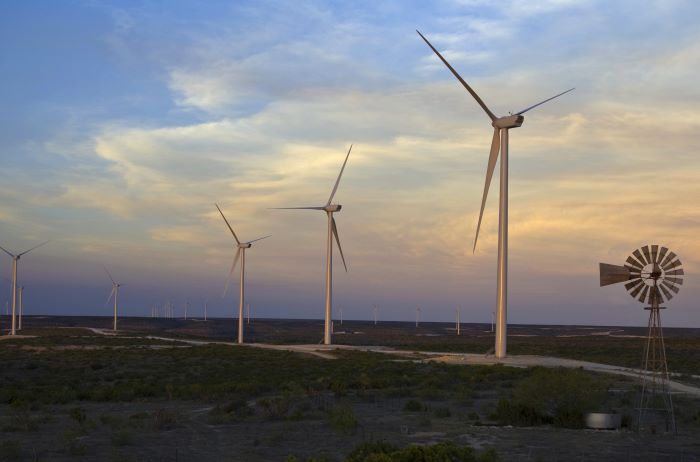 US wind energy developers were planning or beginning construction of about 44 new gigawatts of wind-powered energy generation as of the end of 2019. Photo credit: American Wind Energy Association.

Planned US wind power projects totaling 25 gigawatts (GW) are in danger of being delayed, scaled back, or scrapped altogether due to the COVID-19 economic slowdown, according to the American Wind Energy Association (AWEA). Modifying the federal wind power production tax credit schedule, which has encouraged wide-scale wind development in the United States, would reduce these risks, according to AWEA.

Ripple effects from the pandemic are playing out from China to Ecuador and further — wherever wind components are sourced, manufactured, and shipped. “There is no shortage of shipping capacity, but there are manufacturing facility shutdowns and delays in loading, with ships being stuck in port,” John Hensley, AWEA vice president of research and analytics, told JOC.com. “At the same time [developers] are competing globally for these components and supplies.”

AWEA is lobbying Congress to add a one-year extension to the production tax credit (PTC) schedule already in place so wind farm developers can complete projects launched in 2016 and 2017 that might not be done within the tax credit schedule due to the coronavirus disease 2019 (COVID-19).

AWEA is not asking that a new year be added to the PTC, the group said during a briefing last week, but rather that the deadline for projects already under way be extended. The PTC gives wind energy farm owners the right to take a tax credit of varying amounts per kilowatt hour for electricity sold once the project is producing energy, depending on the year in which the project qualified and provided they have met the PTC requirements.

Similar to the AWEA, China's wind energy association is lobbying the Chinese government to postpone project deadlines, according to the Global Wind Energy Council (GWEC). More than 60 GW of China’s onshore wind projects were approved before the end of 2018. These must be “grid connected” by the end of 2020 to receive a government subsidy, according to GWEC.

Supply chain bottlenecks are affecting the wind turbine supply chain globally, Hensley said. “Ecuador is the world’s largest supplier of balsa wood, a core component in the manufacturing of wind blades, yet the country also has the largest breakout of COVID-19 in Latin America,” he said.

Any lags in manufacturing and transit, including delays at US ports, can delay project schedules and exacerbate driver shortages, Hensley said, affecting the “finely choreographed movement” of wind components.

“We’re seeing delays now … There are only so many technically qualified truckers to move wind components of this size and scale,” Hensley said. Before the COVID-19 crisis hit, he said, there were “adequate transport crews and [wind] components available, but a fairly small margin of error.”

Delays put a “supreme amount of stress on the transportation and logistics in the value supply chain, and there’s not a lot of flexibility to rebound,” Hensley added. “Delays are totally outside of developers' control, with very limited ability to recover given the small amount of float in [transportation] schedules.” Additionally, there are not enough heavy-haul tractor trailer drivers. “We would like to see a growth in folks with this specialized skill set,” he said. “As [wind] components get bigger, development of this workforce becomes more critically important."

Going where the wind goes

Total US wind energy capacity hit 105.6 GW in 2019, with nearly $14 billion invested during the year and 9.1 new GW added to the grid, accounting for 39 percent of new utility-scale power additions, AWEA CEO Tom Kiernan said during the media briefing. Wind now supplies more than 7 percent of the nation’s electricity, the trade group reported, and almost 60,000 wind turbines are now operating across 41 states, Guam, and Puerto Rico.

Another 44 GW of wind project capacity, representing $62 billion in investment and generating enough power for 15 million American homes, is either under construction or in advanced stages of development, Kiernan said. This total includes the 25 GW deemed “at risk” owing to the uncertainties created by COVID-19.

One experienced hauler of wind energy components remains optimistic about the industry's outlook. “Current crisis aside … the industry was very strong in 2019, not just on new construction but on components for wind farm maintenance,” Kris Rzepkowsky, director of marketing for Bennett International Group of McDonough, Georgia, told JOC.com. “All our trucks were well-utilized and, again, current situation aside, we would consider adding more owner-operator drivers to our fleet.”

On coping with COVID-19, he said, “We are open for business as usual, but customers are holding us up because they closed down some facilities. But beyond this delay, it looks strong for the remainder of the year — [particularly] in the Midwest and in Texas. We go where the wind goes.”