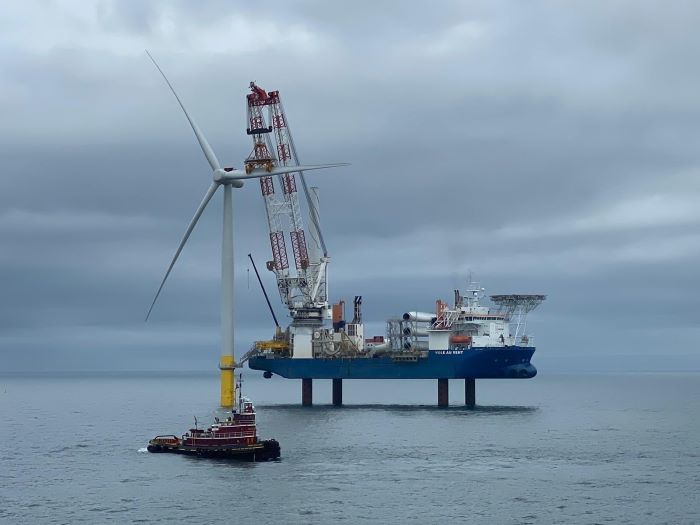 Offshore wind energy, a generator of crucial cargo for the project logistics transport sector, is gaining traction in the US as more than 9,000 megawatts (MW) hit advanced development milestones, including firm equipment orders and power purchase agreements.

Wind turbines for onshore or offshore projects are a core part of the cargo mix for the multipurpose/heavy-lift (MPV/HL) carrier and breakbulk logistics sectors, particularly as the oil and gas industry falters in the wake of the COVID-19 shutdown. Some carriers and logistics service providers are explicitly focusing on wind. Offshore wind components, longer and heavier than onshore, require increasingly specialized ships and handling.

According to a half-year report from the American Wind Energy Association (AWEA), 43,628 MW of new off- and onshore wind capacity fill the US near-term pipeline, with 25,318 MW under active construction and the remainder in advanced development. About 50 percent of the 18,310 MW in advanced stages is offshore, as East Coast states work to meet mandated green energy goals and reduce their carbon-based power generation footprints, according to the report, released August 14.

Of the US projects in advanced development — meaning a project that has not yet started construction but has announced a firm turbine order, is under utility ownership, or has signed a power purchase agreement — some 9,112 MW are offshore, up 22 percent from the 7,483 offshore MW in advanced development at the end of 2019, according to AWEA. Offshore developers expect all of these projects to be generating power by 2026, the report said.

Only one offshore wind farm — the 12-MW Coastal Virginia Offshore pilot project — is now actually under construction in the US. Turbine installation has been completed and commercial operations will start later in 2020, according to AWEA. Rhode Island's 30-MW, five-turbine Block Island wind farm is the only offshore wind farm now operating in the US.

However, the offshore wind market is picking up momentum as states advance offshore wind targets and developers invest in developing and building the first wave of US offshore wind projects, John Hensley, AWEA vice president of Research and Analytics, told JOC.com in an email.

“As you can imagine, the development process for an offshore wind project is complex and can take considerably longer than an onshore wind project,” Hensley said. This happens for several reasons, including the nascent state of the industry and long permitting processes for federal waters that require the development and approval of site assessment plans, construction and operations plans, and environmental impact statements, Hensley said.

US onshore wind development continues to be strong, with 34.5 GW either under construction or in advanced development, Hensley said. “Developers are focused on delivering a large volume of projects in 2020 and 2021 while working through challenges related to COVID-19,” he said. Costs are declining as performance improves, so growth should continue, he said.

In contrast to offshore projects, land-based wind projects typically secure power purchase agreements toward the end of the permitting process or after the permitting process has been completed, and they often start operations within a much shorter one to two years. Additionally, onshore wind projects on private land do not require environmental impact statements, Hensley said.

Although the cost of wind power has fallen due to more efficient turbines and lower turbine costs, US production tax credits have also been central to the onshore sector's growth. Because the COVID-19 shutdown threatened many projects' ability to stay on schedule as required by tax credit rules, new federal IRS guidance grants an additional year of tax flexibility for near-term projects, the AWEA report said. However, the coronavirus disease 2019 (COVID-19) has disrupted supply chains and construction schedules and does add risk to US wind development, AWEA said.

The top five US wind developers are Invenergy, with 6,009 MW either under construction or in advanced development; NextEra Energy Resources with 3,886 MW; Apex with 3,326 MW; Orsted with 3,069 MW; and Power Company of Wyoming with 3,000 MW, according to AWEA.

In the US, GE Renewable Energy is the leader in turbine installations, with 63 percent of the market. Vestas is second with 19 percent, Siemens Gamesa Renewable Energy has 14 percent, and Nordex USA accounts for 3 percent, AWEA said.

Global Shipping Outlook: A Sneak Peek at 2021
Port Performance North America: Managing Cargo Flow During a Pandemic — and Beyond
END_OF_DOCUMENT_TOKEN_TO_BE_REPLACED