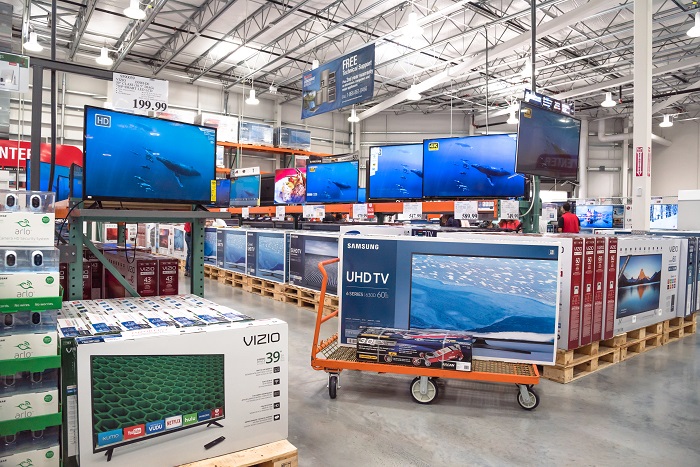 After a robust 2017, another strong year for electronics imports to the United States is likely in 2018, given the iPhone/smartphone era and the utility of apps. And only an all-out China/US trade war would slow that trend. (Above: Flat-panel television sets in a US store.) Photo credit: Shutterstock.com.

Increased sales of smartphones and the trend toward ever larger televisions helped fuel a 5.2 percent year-over-year increase in wholesale sales of electronics in 2017, boosting cargo volumes into the United States. Growth is expected to continue this year.

Sales rose from $247 billion in 2016 to $260 billion in 2017, according to the Consumer Technology Association, which predicts a 3.9 percent increase this year to a record $266 billion, fueled in part by “excitement about emerging technologies.” These include smart speakers and other voice-activated products, virtual reality electronics, and even the growing use of drones, according to the association.

China dominates the US electronics import sector, accounting for 61.6 percent of electronics imports into the United States in 2017; second-ranked South Korea sent just 4.5 percent of the annual import volume, according to figures from PIERS, a sister product of JOC.com.

First US, now Mexican jobs are shifting to China

One trend that has lately added to Chinese electronic exports to the United States is the move to shift manufacturing of televisions from Mexico to China, said Bob O’Brien, president of Display Supply Chain Consultants, a market research firm for the display industries, who noticed the shift while analyzing data from the US International Trade Commission.

Switching production to China would likely boost imports by sea, because Mexican factories mostly send the TVs to the United States by rail and truck. Television import figures could also be boosted by the trend toward ever bigger televisions, which means fewer units can fit into a container, and so more containers would be needed, O’Brien said.

The United States imported 1.26 million TEU of electronics in 2017, a 1.2 percent increase over 2016, according to data from PIERS. That was a step down from the 5.7 percent year-over-year growth in 2016 but an improvement on the 1.5 percent drop in cargo handled in 2016, the figures show.

Because China is such a dominant player, West Coast ports handled the bulk of electronics imports, with Los Angeles handling 30.8 percent of the US import volume and Long Beach, 24 percent. Ranked fourth was the Northwest Seaport Alliance with 6.83 percent of the market share, behind the Port of New York and New Jersey, with 9.8 percent.

Cargo import figures overall were driven in part by televisions — 19 million units were imported in 2017, up from 16 billion in 2016, O’Brien said. The volume of smartphones imported ticked up slightly in 2017, but other parts of the electronics import sector remained flat. That included computers and monitors, both of which are mature markets in which new item sales mainly come from replacing existing items, he said.

The IHS Markit Purchasing Managers Index (PMI), which tracks the actions of the electronics industry, rose steadily from 2015 to the start of this year, fell to a 16-month low in March, but then rebounded in April. The rebound was “consistent with a robust improvement in operating conditions, driven by sharper expansions in output and new business,” the May PMI report said.

Global Shipping Outlook: A Sneak Peek at 2021
Port Performance North America: Managing Cargo Flow During a Pandemic — and Beyond
END_OF_DOCUMENT_TOKEN_TO_BE_REPLACED