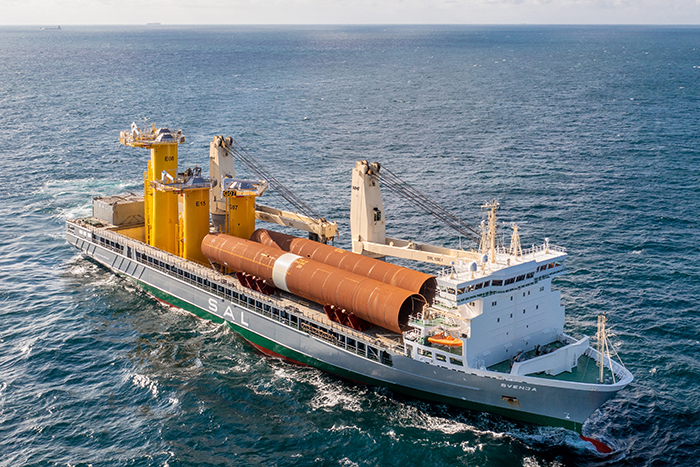 Breakbulk and project logistics providers are pulling in healthy profits due to near-record demand, but schedule reliability is down. Photo credit: SAL Heavy Lift.

Project and breakbulk logistics executives are looking ahead to strong project cargo demand even as they grapple with an unpredictable, expensive shipping market that shows no signs of returning to any pre-pandemic status quo.

“We have had change thrust upon us. If the industry doesn’t change in terms of people, processes, and technology, the industry will move backwards, and the risks will be too great,” Tim Killen, chief sales officer with project forwarder deugro, told JOC.com. “If clients think they can go back to the old model, they will be disappointed.”

The low costs and predictability that shippers could take for granted prior to the COVID-19 pandemic are gone “because the market has changed immeasurably,” Killen said.

Kai von Taube, global head of chartering with deugro and formerly director of line management at multipurpose carrier Rickmers-Linie, agreed that the effects of the pandemic, including ongoing lockdowns in China, increased costs for raw materials, and the global transition from fossil fuels to more sustainable energy sources have created “a situation we’ve never seen before.”

With demand at near-record levels, breakbulk and project logistics providers are enjoying increased profit margins even as worsening schedule reliability is causing no small amount of “heartburn” for shippers, carriers, and forwarders, according to Jake Swanson, regional vice president, Americas, at project forwarder DHL Industrial Logistics.

“You are pulling your hair out, even though you’re making money,” Swanson told JOC.com.

Although on-time performance for multipurpose vessels (MPVs) is still better than that of container ships, which have seen reliability plummet from approximately 80 percent before the pandemic to just 30 percent now, port congestion is disrupting breakbulk and project schedules. And “if you want to book something right away, there are no ships [available on the] spot [market], and that impacts rates,” he said.

New approaches to a new market

On top of rising freight rates and the risks of schedule slippage, breakbulk shippers are scrambling to find warehouse space and equipment and have been hit hard by surging detention and demurrage charges — costs that were typically shrugged off in the pre-COVID market.

“No one could have anticipated this deluge that we were all hit with. So much of what we do [now] is reactive,” a global breakbulk shipper told JOC.com.

The good news is that these problems are the result of strong volumes and healthy demand. “We’re largely protecting the bottom line,” the shipper said. However, efforts to preserve margins are complicated by scarcities and rising costs. Warehouse space is vanishingly rare, truckers and equipment are hard to find, and penalties for shipping delays have escalated dramatically.

For example, fees for detention — used synonymously with “demurrage” in MPV shipping to refer to pro-rated charges levied by carriers for certain types of delays related to a given cargo — have ballooned from about $8,000 to $10,000 per day before the pandemic to as much as $50,000 per day, according to the breakbulk shipper.

“The damages associated with delays are far greater,” the shipper said. “The costs are staggering. We’re talking about, in some cases, millions of dollars’ worth of demurrage.”

Killen said those that expected the breakbulk market to return to “normal” in 2020 now realize that there’s no turning back the clock.

“We’ve been challenged in every aspect of transport,” he said. Vessel capacity is an issue, all bookings require much longer lead times than in the past, rates are high, and fuel prices have become a key inflationary factor, Killen said. “It’s the delivered end-to-end costs of logistics that is the critical factor, not just the procured costs,” he said.

Killen and von Taube said a major part of their role as project forwarders is to educate their clients and colleagues on the risks and challenges of this chaotic shipping market — from force majeure to trucking capacity shortages.

Killen also noted that the overheated market is driving change in breakbulk and project logistics contracting models. Executing contracts signed before the pandemic presents a challenge, but “clients generally understand that old pricing levels and contracting models may not work anymore, and we see a positive shift to longer lead times and more visibility when it comes to planning, procurement, tendering, organizing, and delivery,” he said.

Some shippers and logistics providers are experimenting with new contracting methods such as linking costs to a given index such as the Baltic Dry Index or the Toepfer Multipurpose Index or using a transparent, “open book” approach. However, the realities of project and breakbulk shipping complicate these concepts, and they are far from perfect, said DHL’s Swanson.

Another approach, Swanson said, is that project shippers are sending bid proposals for specific scopes — i.e., segments — of a project, rather than for the entire project. Once that scope has been completed, the shipper sends another request for bids on the next segment, helping to control costs but adding to the workload of forwarders bidding on the individual scopes, he said.

Even as the hair-on-fire market shows no sign of easing, engineering, procurement, and construction firms (EPCs) and project forwarders only expect the project market to pick up speed.

“We see a very healthy pipeline of opportunities for the next five to 10 years,” Ryan Foley, CEO of industrial projects at DHL Global Forwarding, told JOC.com. “We had many projects slow down — and some stop completely — as the pandemic grew, but these projects have returned.”

Industrial projects can take months or even years to move from planning to final investment decision (FID) to procurement to the actual movement of cargo, Swanson said. This pattern was slowed further when capital expenditures dried up as oil prices crashed in the early months of COVID-19. Projects that were expected to get under way in 2020 “are now coming forward in 2022,” he said.

“We see this with the EPCs, and also with the IOCs [international oil companies] coming to us with turnarounds and smaller, mid-sized projects” that the IOCs will manage in-house directly with their forwarders, rather than using an EPC, Swanson said. A few mega-projects — i.e., projects costing $1 billion or more — including liquefied natural gas (LNG) projects in Australia, Qatar, and Uganda, are moving ahead, while renewables, mining, and technology, including microchip processing facilities, are creating project opportunities, he said.

“We now see a huge pipeline of work approaching in a range of existing and new energy markets,” Killen said. “We see projects [that were] put on hold due to COVID now being dusted down and re-priced and re-risk assessed.”

Von Taube said deugro is “seeing more projects coming up than we’ve seen in the last decade,” and as the energy transition gains strength, the breakbulk industry will benefit from the transition to wind energy as well as LNG. Several large projects have already been awarded, he noted, including the Qatar LNG project, which is expected to generate several million freight tons of project and breakbulk cargo.

IOCs, original equipment manufacturers (OEMs), and EPCs handling logistics for their capital project clients tend to lean on a short list of carefully vetted project forwarders, and “that list is getting smaller,” one forwarding executive told JOC.com. DSV, for example, let much of the project logistics expertise of Panalpina and Agility go when it acquired those firms in 2019 and 2021, respectively, and although DSV will now rebuild its project logistics team, EPCs have two fewer specialized, vetted project forwarding teams from which to choose.

Strong demand and a relative shortage of options have created opportunities for other project forwarders to get themselves onto those lists, the executive said.

However, von Taube said he sees little movement toward further consolidation in the project forwarding segment. “You have clients who are totally puzzled,” he said. All they see is that their logistics plans are not working out, “so they’re seeking [any] straw that can help them. Right now, [shippers are] happy to have a very diversified forwarders’ market to help them get out of this bad situation.

“For the time being, everyone is so busy,” von Taube added. “Why should these players think about consolidation? There’s no benefit for them.”

How to Improve OTIF: 15 Tips for On Time and In Full Delivery
END_OF_DOCUMENT_TOKEN_TO_BE_REPLACED