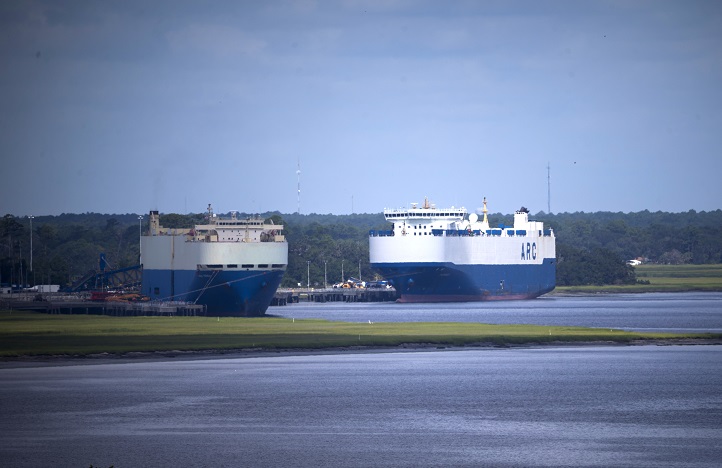 Brunswick (above) is the second-busiest roll-on, roll-off port by tonnage in the United States, behind Baltimore; tariffs have dampened trade by about 5 percent, but the port still expects to handle 600,000 units in 2018. Photo credit: Georgia Ports Authority.

The Georgia Ports Authority (GPA) will expand its Brunswick roll-on, roll-off (ro-ro) facilities on Colonel's Island with 60 additional dockside acres, increased rail capacity, and improved road infrastructure during the coming year, Executive Director Griff Lynch said in late October during the annual Brunswick State of the Port address. The GPA is also in the early stages of acquiring approvals and permitting for a fourth berth.

GPA terminals handled 630,000 car, truck, and tractor units during fiscal 2018. Of these, 590,500 were handled at Colonel's Island, Brunswick, with the remainder crossing the dock at Ocean Terminal, the GPA's breakbulk and ro-ro terminal on the Savannah River, just outside the city of Savannah. Total annual capacity at Brunswick is now 800,000 units. With the dockside acreage, plus another 40 acres being added for ro-ro units, and about 400 acres of permitted developable land available, the port authority plans to eventually bring annual throughput capacity up to 1.5 million units.

The 60 new dockside acres will increase the port's car storage spaces by 8,250. A new cross-terminal road and a new access road between the docks and the south side of the port (bisected by highway 17) will better link auto processing lots, rail lines, and other facilities. The new rail capacity will allow the port to build up unit trains to 10,000 feet on the terminal site. CSX Transportation and Norfolk Southern Railway connect to Brunswick via terminal railroad Golden Isles, operated by Genesee & Wyoming.

Brunswick is the second-busiest ro-ro port in the US, by tonnage, behind Baltimore, Lynch said during in an interview following the address. Tariffs have dampened trade by about 5 percent, he estimated, but the port still expects to handle 600,000 units at Brunswick alone during the current year, in addition to business at Ocean Terminal. Although US auto sales are flat generally, he hopes to grow by finding/attracting new original equipment manufacturers to Colonel's Island. "We'll be as good as the economy," Lynch said, adding that the southeast US is expected to outpace the nation, both demographically and economically.

Dredging has been a bit of a headache for GPA, Lynch said. Although it has $11.5 million budgeted and ready to spend, over the past two or three years dredgers have been pulled away from Georgia to the Mississippi River during the crucial winter months — the only period when dredging can occur — for environmental reasons.