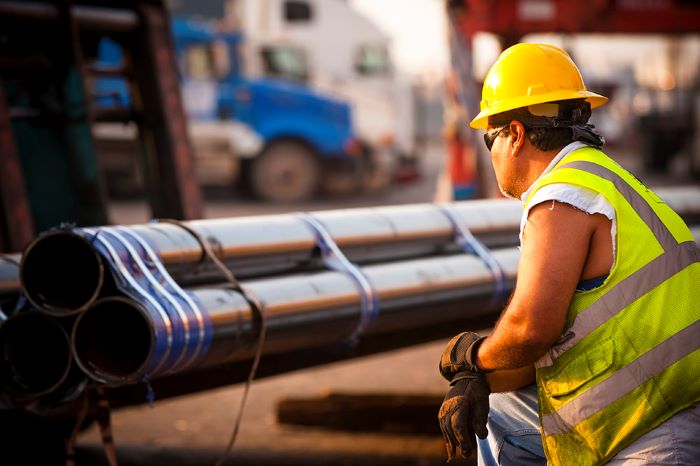 The global automobile production shutdown, overall demand destruction driven by efforts to slow the spread of the coronavirus disease 2019 (COVID-19), and a massive oversupply have combined to slow steel imports and drive down prices this year after a tariff-hobbled 2019.

“The ingredients and factors that would drive steel imports into the US are just not there,” Bob Drew, general manager of logistics for steel trader Tata International, told JOC.com. “The demand is not there. Anticipation of rising prices is not there. The degree of uncertainty that is always part of the risk factor associated with this business is at an almost unmanageable level.”

“People were worried already because of the impact from the tariffs. We've seen volumes softening, and this pandemic does not help things,” John Mosely, chief commercial officer with the Port of Houston Authority, told JOC.com. On top of that, low oil prices mean falling oil rig counts, which means that imports of tubular goods — steel pipe — bound for drilling in the Permian Basin will “take a huge hit,” he said.

Clipper Steel Services, part of the Clipper bulk carrier group, operates a dedicated steel service between Northern Europe and North America. The carrier has seen an abrupt fall in steel cargo bookings for April, Peter Svensson, senior VP and head of Clipper Americas, said. “We usually do three or four sailings a month. We'll have two in April,” Svensson said, estimating the decline will mean a reduction of 50,000 to 60,000 metric tons of breakbulk steel cargo for Clipper for the month.

The traders and cargo owners that move cargo on Clipper tell Svensson their orders from clients have been canceled and no new orders are coming in. “We hope this is only for April and May. February was a normal month, March was okay, and April is not very rosy,” he said. It's too early to estimate tonnage for May, he said.

“I suspect [the slowdown] is related to the lack of automotive production and construction,” Svensson said. “I always thought that steel was essential, but who now is going out to buy a new refrigerator or a stove?” He added that Clipper has seen a jump in tin imports. Tin is used to make cans, and shelter-in-place orders have people filling their pantries with canned goods from foodstuffs to aerosol sanitizers.

Increasingly, businesses throughout the steel supply chain are having trouble fulfilling contractual obligations, said Drew. He manages global chartering for Tata International, working with a mix of vessel owners, operators, and brokers. Trade tariffs and slowing global trade were already creating a new level of challenges for imported steel even before the pandemic hit, he said, especially given the increasing competitiveness of US mills. “We saw threats to imports that proved very challenging,” Drew said.

The section 232 quotas have created distortion in the import records since they were enacted, however, because when import volumes from quota countries, most importantly Brazil and South Korea, exceed quota limits, steel imports may be held in foreign trade zones to be released during the next available quota “window.” That means that steel could be counted by the ports during one period and by Customs in a later period, a lag that the American Institute for International Steel, in a previous interview with JOC.com, noted was marked during late 2018-early 2019. This lag distorts year-over-year comparisons, perhaps particularly in the case of Mobile, as the port receives high volumes of steel slabs from Brazil.

Tata's steel products imported into the US typically include hot- and cold-rolled steel, galvanized products, long products, wire rod, rebar, finished goods, and niche products such as pipe and specialty bar, Drew said. “For the moment, we are not seeing much interest in any kind of buying. Some schools of thought say that when this is all over there could be pent up demand and we could see pricing [come] more into line,” he said.

However, that pent-up demand may be a long while surfacing. There are three underlying explanations for the ills currently troubling the global steel industry, said John Anton, associate director for pricing and purchasing with IHS Markit, parent company of JOC.com. “The first two reasons, of roughly equal weight, are the demand crash and the worker shortage,” he said. The third is a massive global oversupply of steel.

Due to the COVID-19 shutdown, auto manufacturing and other types of steel-based manufacturing and construction have halted around the globe, erasing steel mills' primary customers. “You have no one to sell to,” Anton said. Stay-at-home orders are having an equally powerful effect, freezing both labor and potential customers in place. “We are seeing steel production cuts rather than price cuts. Both will fall, but production is falling more, and that's everywhere on the planet,” he said.

For similar reasons, steel scrap prices are crashing, Anton said. Steel scrap is feedstock for mills with electric arc furnaces, which have also cut production, although not as steeply as traditional blast furnaces, he said. During the last week of March, Anton said, scrap prices fell from $250/gross ton to $150/gross ton. Even price discovery for ferrous products has become difficult, he said, because there are so few transactions taking place.

Even after the global economy begins unlocking, an overhang of excess steel will haunt the sector, said Anton. “Steel prices will not go up as we recover,” he said, because current steel inventories are overstuffed.

Chinese steel mills have 60 percent more steel on hand now than at any point from 2015 through 2019, because it failed to slow production until well after demand started crashing in February, Anton said. The same thing happened in other markets, but to a lesser extent, he said, and “when the economy starts improving, [they will] have to work off [excess] inventory.”

The pandemic could also affect the automotive industry, and steelmaking, in subtler ways, Anton said. Working from home may become more prevalent, and that would mean fewer car sales — and auto-making is the steel industry's second-largest demand sector. Steel will continue to be used in construction, machinery, and other types of manufacturing, but “we could see a long-term dip to automotive,” he said.