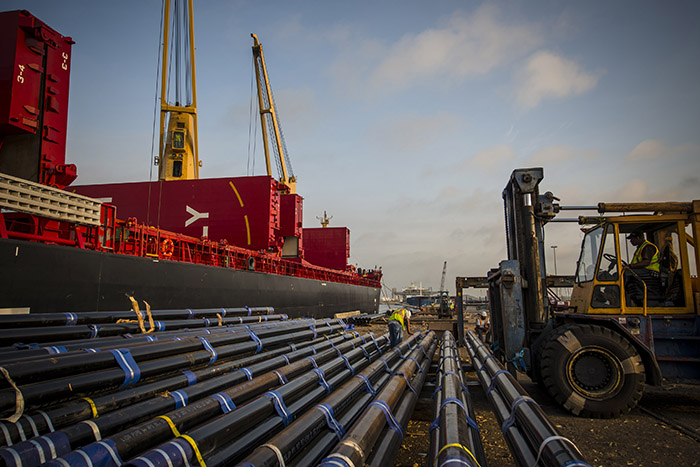 Breakbulk operations at the Port of Houston, pictured, along with other Gulf ports, have benefited from a surge in petrochemical plant production.

Things could be better, but they also could be a lot worse for breakbulk and project cargo shipping in US Gulf ports.

Gulf ports are among the few relatively bright spots in a generally depressed breakbulk-project market. Several ports in the region are still riding the wave of shipments of heavy and oversized components for the region’s fast-expanding petrochemical industry.

Attracted by cheap natural-gas feedstocks, companies have committed or proposed hundreds of billions of dollars of investments in plants along a crescent stretching from South Texas to the Mississippi River.

A number of those projects have been canceled or delayed by this year’s slump in oil prices, and port and industry officials are starting to worry that the pipeline of new projects is running low. However, plants already under way will provide several more years of strong project cargo flows.

The scale of petrochemical and LNG plant construction along the gulf is mind-boggling. Several projects, including the Sasol complex and Cheniere Energy terminal near Lake Charles, Louisiana, and LNG terminals at Corpus Christi and Freeport, Texas, represent investments exceeding $10 billion apiece. Several other big projects continue to move through the permitting process.

Steel buyers already were bracing for the imposition of US antidumping penalties and countervailing duties against China and other producers accused of dumping steel into the US market at prices below production costs. These actions are likely to change sourcing patterns as buyers seek supplies from countries not affected by sanctions for particular commodities.

At New Orleans, where steel imports are geared to coils and structural steel, imports last year fell 7 percent, to 3.27 million tons. Steel imports at Houston are dominated by oilfield drilling pipe, which has been hit by a drop in drilling owing to falling oil and gas prices.

At Brownsville, Texas, port officials expect this year’s steel volume to exceed last year's 3.3 million tons. Most of Brownsville’s steel volume is slabs that move to the Monterrey, Mexico, area for processing into vehicle parts and other manufactured products.

Mobile, a minor player in steel a decade ago, now handles about 4.5 million tons a year, making it one of the highest-volume steel ports in the United States. Last year the Alabama State Port Authority opened a $36 million privately operated warehouse for storage of steel coils.

Port Tampa Bay has a cluster of steel companies at its Port Redwing breakbulk terminal, and has been targeting additional steel importers and exporters. Last year, Florida Structural Steel and Tampa Tank expanded their port operation for fabrication of steel structures for export.

Galveston has targeted oversize cargo with a rail yard featuring tracks with 16-foot separation, which provides extra clearance for out-of-gauge shipments such as windmill blades. Brownsville, which this year handled shipments for three large wind farms, recently expanded an open storage yard by 10 acres to accommodate these and other large pieces.

Two other traditional breakbulk commodities at Gulf ports, forest products and refrigerated cargo, have lost market share to containers. Shippers have been drawn to regular container services that don’t require them to accumulate enough cargo to fill a chartered breakbulk vessel, and by low container rates.

Breakbulk forest product shipments remain important, however, at ports such as Panama City, Florida, which this year announced plans to develop a breakbulk terminal on 41 acres acquired by WestRock Co., which operates a corrugated packaging mill on adjacent property.

The new terminal will include include a 250,000-square-foot warehouse for wood pulp, kraft linerboard and related goods. It will have a rail yard with capacity for 48 railcars, a 38-foot-draft berthing area with reinforced bulkhead and 10 acres of open storage.

The expansion is planned on 41 acres the port acquired last week from WestRock Co., which plans to continue to operate its corrugated packaging mill on adjoining property. The port has an option to buy 27 adjacent acres for further expansion.

Another port adding breakbulk facilities is Port Arthur, which along with Mobile is one of the main US ports handling woodpulp. This year, the Texas city’s voters approved the sale of $89 million in bonds to finance projects including a 600-foot dock extension and tracks to accommodate a 100-railcar train.

At New Orleans, the port has been considering the acquisition of 33 acres at Huntington-Ingalls’ former Avondale Shipyard for redevelopment into a breakbulk terminal. The section includes two berths on 2,000 linear feet of waterfront.

The former shipyard is on the opposite side of the Mississippi River and a few miles upriver from the port’s main cargo terminals. Port officials say the Avondale site could provide additional handling capacity for cargoes such as steel billets and nonferrous metals, and relieve pressure on space-constrained breakbulk operations adjacent to the port’s Napoleon Avenue container terminal.