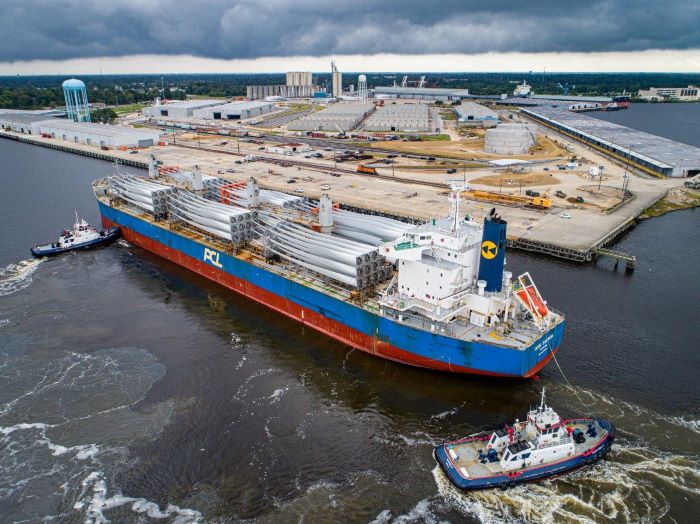 One week after powerful Hurricane Laura did “serious damage” to the Port of Lake Charles in Louisiana, terminals have reopened while a damage assessment continues. Therrance Chretien, director of cargo and trade development at the port, told JOC.com Thursday a remediation team is at the port removing debris, protecting cargo, and clearing pathways and rail lines. 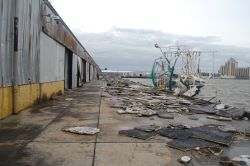 Hurricane Laura damaged terminals and equipment and sank or damaged several shrimp boats brought into the port for safe harbor during the storm. Credit: Port of Lake Charles.

The Calcasieu ship channel that serves the port is open, but traffic has been restricted to vessels with a maximum draft of 30 feet, as opposed to the normal 40 feet. A bulk sulfur ship and a multipurpose ship delivering windmill blades are expected to arrive over the weekend, Chretien said.

Category 4 Hurricane Laura stormed ashore early on Aug. 27, near Cameron, Louisiana, on the US Gulf about 30 miles south of Lake Charles. The storm surge was estimated at 9 to 12 feet, and winds ranging from 120 to 150 mph pounded the area for more than an hour, according to CNN. The storm damaged terminals and port equipment, knocked over rail cars, and caused significant property damage in the nearby city of Lake Charles.

That’s six hundred blades during the first seven months of the year, Chretien said. The blades, some as long as 44 meters, are replacements for turbines on existing wind farms and are stored on the port's container pad, he said. “They go out on unit trains to Kansas and Wyoming, and by truck to Texas and Oklahoma.” Tower sections began arriving in August, he said. 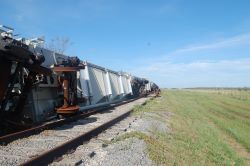 High winds from Hurricane Laura pushed rail cars over like so many toys. Credit: Port of Lake Charles.

Project cargo and steel imports at Lake Charles ebb and flow as needed to support construction on nearby capital projects. While the boom of 2017 and 2018 has faded, the port is currently “putting out rate indication quotes for pipe,” Chretien said, as two export liquefied natural gas (LNG) facilities, Venture Global and Driftwood LNG, are expected to break ground soon.

Bagged US Department of Agriculture food aid exports were for years a mainstay breakbulk cargo at the port. Much of this is now shipped in containers, but tonnage also shifts between breakbulk and containers depending on rates and container availability, Chretien said. Exports of bagged rice plummeted 68.1 percent year over year to 30,855 US tons (27,991 mt) in the first seven months of 2020, but Chretien said the port expects to ship another 11,000 US tons to Africa in September.

Lumber imports from Europe and rubber handled on the port for a nearby manufacturer are also mainstay cargoes for the port, Chretien said. He expects these commodities, along with steel pipe, project cargo, and especially wind turbines, to remain the key breakbulk and project cargoes for Lake Charles through 2021.