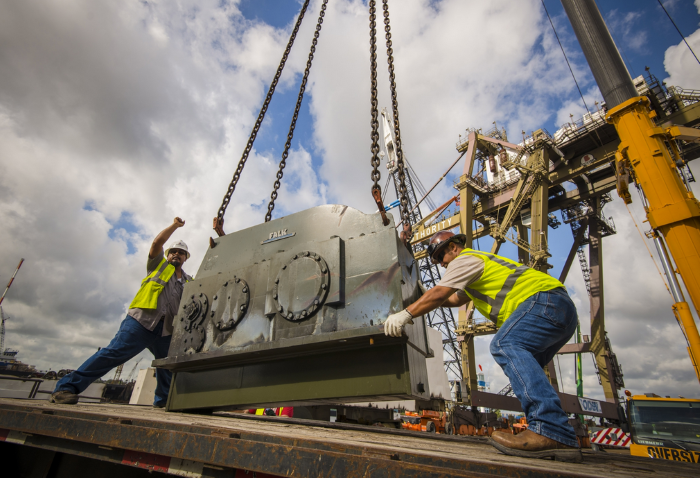 Breakbulk steel and pipe tonnage at the Port of Houston plummeted more than 45 percent in the first half of the year as project activity in the oil and gas sector came to a near standstill amid the COVID-19-driven collapse in oil prices.

John Moseley, chief commercial officer with the Port of Houston, told JOC.com Houston is also seeing a dip in tonnage related to petrochemical plants following a multi-year, multi-billion-dollar Gulf Coast buildout underpinned by cheap gas feedstock from the formerly booming shale fields. “The first wave is completed, and we'll see if any more modules or components come up for a second wave,” he said.

West Texas Intermediate (WTI) oil was at $41 per barrel on August 3, a recovery from April's precipitous slide, but still below the $50/barrel  that Moseley said will trigger an influx of OCTG and related project cargoes such as blowout preventers.

According to IHS Markit, parent company of JOC.com, that $50 price is not coming anytime soon. IHS Markit's Energy Advisory Service said in an update Thursday that while oil markets have returned to “relatively stable ground” since the early days of the pandemic, benchmark Dated Brent is unlikely to pass the $50/barrel mark until the second half of 2021 — and that recovery is dependent on the course of the pandemic and whether Saudi Arabia and its OPEC+ partners continue to work together to manage supply.

IHS Markit expects Brent to average $40 to $47/barrel through the first half of 2021, barring a large second wave of the coronavirus disease 2019 (COVID-19) that drives further widespread economic shutdowns. WTI, a benchmark for US oil prices, tends to lag Brent.

Cliff Kuhfeldt, Houston-based senior project cargo manager at multipurpose carrier G2 Ocean, told JOC.com that in addition to their typical forest products cargo they, similar to other multipurpose and heavy-lift carriers, are benefiting from demand for wind energy components in the US Gulf. Oil and gas and petrochemical projects are clearly “depressed,” and liquefied natural gas (LNG) projects are being delayed, he said.

Per Petersen, Houston-based president of BBC Chartering USA, also said that wind energy is “the big driver” in the Gulf, increasing despite the downturn. “That's what keeps us busy here on the coast,” he said. In addition to Houston, the Texas ports of Brownsville, Beaumont, and Corpus Christi are busy with renewables-related cargo, he said.

BBC has begun a Caribbean liner service and is currently adding those calls to existing liner sailings to the east and west coasts of South America, Petersen said. “We are concentrating on Colombia, Trinidad, Guyana and Suriname,” he said. On the tramp side, bulk cargoes such as grains dominate backhauls out of the Gulf. “Eight out of 10 ships we get away from here are loaded with bulk,” he said.

Despite the pandemic-driven tonnage decline, “we remind ourselves that we are in it for the long game,” Moseley said. The US House of Representatives just passed a water resources development act that includes funding to take the Houston ship channel from 530 feet wide to 700 feet wide, easing the movement of the largest container carriers and tankers. Senate approval is pending, but it's potentially “a big win for the industry,” Moseley said.

Global Shipping Outlook: A Sneak Peek at 2021
Port Performance North America: Managing Cargo Flow During a Pandemic — and Beyond
END_OF_DOCUMENT_TOKEN_TO_BE_REPLACED