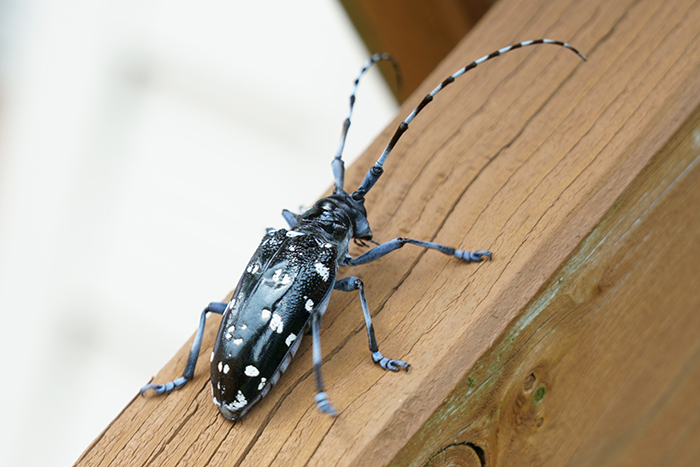 A lack of transparency remains a major impediment to compliance with ISPM 15, rules meant to prevent the introduction of invasive and destructive pests like the Asian longhorned beetle (pictured) via wood packaging materials (WPM). Photo credit: Shutterstock.com.

Facing the prospect of steep fines and re-exportation costs, shippers in the breakbulk and project cargo sector have stepped up their efforts in the battle against invasive pests entering the United States via wood packaging materials (WPM) by investigating and educating WPM makers, increasing requirements for heat treatments, and turning to non-WPM materials for dunnage.

Fifteen years after the US adopted the International Standards for Phytosanitary Measures No. 15 (ISPM 15), a lack of transparency remains a major impediment to compliance, according to breakbulk and project shippers. The US Department of Agriculture’s Animal and Plant Health Inspection Service (APHIS) does not share information on violations, making it more difficult for shippers to track down sources of non-compliant WPM, industry members told JOC.com.

In some cases, importers have resorted to dividing project cargo imports into separate bills of lading — even for full charters — to avoid re-exporting entire shipments if certain species of invasive insects are found. And in Houston, the busiest breakbulk gateway in the US and a hotbed of ISPM 15 enforcement, a new privately owned incinerator has come online, allowing some shippers using the port to destroy non-compliant dunnage without re-exportation.

Shippers and government officials who spoke with The Journal of Commerce agreed that 2020 began with a lull in ISPM 15 violations at the Port of Houston, perhaps due to the slowdown in global trade. But according to Diana Davila, project director at UTC Overseas, Inc. and chairman of the Exporters Competitive Maritime Council (ECMC) committee on ISPM 15, re-exports due to the presence of invasive species in WPM began to pick up again in March. There is no publicly available list of violations and penalties, which range from fines to full re-exportation of the affected dunnage and cargo for mitigation, but ocean carriers and importers say a single infraction can cost millions of dollars and cause major disruptions in project schedules, noting importers and shipping lines pay these costs, not the suppliers of faulty WPM.

Officially adopted by the US in 2005, ISPM 15 sets out specific rules for the fumigation or heat treatment and proper labelling of WPM to prevent invasive pests from stowing away. Two types of non-compliance can trigger re-exportation: improper stamping, or the discovery of a live invasive insect, which can happen even with properly stamped, treated, and apparently compliant WPM.

There are six families of insect that, when found burrowed into wood packaging material, indicate a treatment failure and trigger re-exportation, according to Stephen Brady, senior agriculture operations manager and agriculture programs and trade liaison at US Customs and Border Protection (CBP), the agency responsible for inspecting inbound WPM for non-native flora and fauna. To avoid introducing those pests into the US, non-compliant WPM is re-exported, meaning it must leave US waters within a specific period of time — often seven calendar days — and be taken to a country that will accept it to be fumigated and disposed of.

USDA regulations dictate that if a live insect is found in wood packaging, the cargo itself must also be re-exported, said Tyrone Jones, Forestry Trade Director with the USDA’s Plant Protection and Quarantine (PPQ) program. Typically, however, cargo that was braced with infested dunnage can remain in the US port while the dunnage is re-exported.

“When it comes to wood packaging [or any untreated, raw, or unprocessed wood product], we are generally concerned about longhorned beetles, wood wasps, and bark beetles,” said Jones. Accidentally importing live invasive insects can cause economic damage that extends far beyond punitive fines or the cost of re-exporting shipments. “We believe that both the Asian longhorned beetle and emerald ash borer entered the United States in infested wood packaging material,” he said. “Since their arrival, the United States has spent over $1 billion to eradicate or control these pests.”

Shippers and regulators have made efforts over the past year to work collaboratively on ISPM compliance issues. “We have started a dialog; we’re not hiding in the bushes,” said Svensson.

Affected industry members have visited regulatory officials to make it clear they understand the problem and have even asked for help finding solutions, but they are often left frustrated when CBP is unable to disclose how or where an infestation was found. “In order for us to backtrack with the supplier that supplied that piece of wood, we need to see it. Apparently, [CBP is] not allowed to release that information. They just say, ‘This is what we found in a piece,’” Svensson said.

Davila said CBP is listening and trying to work with shippers, but the industry needs more information to break the cycle of non-compliance. “On the WPM side, I feel like there’s a lot of progress that needs to be made on the visibility of everyone being able to see and understand where some of the violations are,” she said.

Shippers in the Houston area, for example, requested pictures of infestations to accompany reports for violation. “We weren’t able to get an approval from [CBP’s] head office in Washington,” she said. “The local office was willing to go out and ask for that. It was not approved.”

And it’s not just CBP and APHIS being asked to increase transparency, as information sharing among industry members is also important, said Cliff Kuhfeldt, senior project cargo manager at multipurpose carrier G2 Ocean. “I think the key to this problem is to be upfront and transparent with reported cases on board vessels, regardless of the competition among our industry,” he said.

To avoid re-exportation, some shippers are instituting “self-mitigation” procedures, separating cargo shipments into multiple bills of lading, said Davila. This way, if a piece of WPM is found to be non-compliant, the shipper can re-export just that piece, rather than the entire shipment, saving as much as millions of dollars, she explained. “Within our industry circle, a lot of people have adopted that practice,” she said.

Other efforts toward compliance include switching from WPM to plastic- or resin-based packaging material, said Kuhfeldt. “The problem with that business model, of course, is cost. Those types of packaging are a lot more expensive than your traditional wood and/or heat-treated wood packaging materials,” he said.

Svensson noted, however, that the higher initial cost of purchasing non-wood-based dunnage is offset in part by the fact that it can be reused. “We have tested a number of different products, and we have actually found now a product that works for coils and skidded coils. We’ll start using that this year.” Reusable material would also save the cost of disposal, which can be expensive even for compliant dunnage, he said.

Clipper has also worked with their WPM suppliers in Europe to adjust their wood treatment processes, Svensson said, advising them to heat the wood for longer and at a higher temperature than required by the letter of ISPM 15 and requesting that they take care not to overcrowd ovens. European suppliers are prohibited from using methyl bromide fumigation to treat WPM, so they rely on heat treatment instead.

But according to Davila, heat-treated WPM is less likely to be compliant. “From the instances that we have access to — because of course there’s no public informational base, so this is only from people who have shared information with us — when it’s methyl bromide, if there’s any issue, it’s due to the stamping. They’re not finding bugs,” she said.

In addition, APHIS and CBP officials say they plan to send representatives to Antwerp to train WPM facility inspectors on how to detect non-compliant wood packaging before it is exported. “Our job is to find bugs, but … we would rather not find anything,” said Brady. The trip had been planned for April 2020, but due to travel restrictions related to the coronavirus disease 2019 (COVID-19), it will be rescheduled for the fall, Svensson said.

Shippers and regulators agree that ISPM 15 violations at the Port of Houston hit a low point as 2020 began, but there is no consensus on why.

Dominic Sun, director of trade development at the port of Houston, noted that the lull in non-compliance coincided with a dip in breakbulk transport demand. “Barrel prices for oil and petroleum right now are at an all-time low. When the margins are so low, and oil prices are so low, there’s no driver and no impetus for [oil] companies to expand their capacity. This is why steel volumes have dropped dramatically.” Sun added that the Trump administration’s import tariffs on non-US steel have also adversely affected inbound volumes.

Adding fuel to the incinerator

In some instances, ships that arrive at the Port of Houston now have the option to incinerate non-compliant dunnage rather than re-export it. In January, Richardson Stevedoring and Logistics Services received approval from APHIS and CBP to operate an incinerator approximately the size and shape of a 20-foot shipping container to dispose of “any loose, clean non-compliant wood dunnage,” according to a statement from the company.

Before this incinerator came online, the USDA had only one other APHIS-approved incinerator in place for the destruction of non-compliant dunnage, on the Delaware River.

Use of the new incinerator in Houston has strict limits, Rainer Lilienthal, senior director of business development at Richardson Companies, told The Journal of Commerce. According to the agreement’s “one-operator rule,” only cargo that is handled by subsidiary Richardson Stevedoring or its sister company Platinum Stevedoring is eligible to use the facility.

Due to Texas state emissions regulations, Richardson is also limited to running the incinerator 750 hours per year. “Every state has a different regulation in terms of how many hours they’re able to operate an incinerator …. This is not under one uniform federal code,” Lilienthal said.

Although Houston is the first port along the Gulf Coast to have an incinerator for dunnage, APHIS actually instituted the policy that allows dunnage to be incinerated back in 2016. “It was a safeguarding tool used for our benefit, as well as the industry’s benefit, because if we found dunnage that was non-compliant and the ship was already gone, it was very difficult to get that dunnage re-exported. No ship’s captain wanted it to be onboard if he knew that there was an infestation,” said CBP’s Brady.

“So it was either inspect it as well as you can while the ship is still there, or we had to implement another mitigation strategy, which was incineration, because we had dunnage sitting on a pier that we knew to be infested with insects that we couldn’t get rid of,” he said.

While APHIS currently only allows incineration of dunnage, in February the department wrapped up a pilot program started in 2018 at the Delaware River facilities to study the feasibility of incinerating all non-compliant WPM. Officials remain tight-lipped about the results of the program. “Over the coming months, APHIS and US Customs and Border Protection (CBP) will evaluate the results of the pilot and determine next steps,” said APHIS’s Jones.

“This is a complicated issue,” he said. “The time it takes to unload and separate goods shipped on/in wood packaging creates an increased risk of pests escaping into the environment.” APHIS is also evaluating whether having an available incinerator encourages or discourages compliance with ISPM 15 standards, he said.