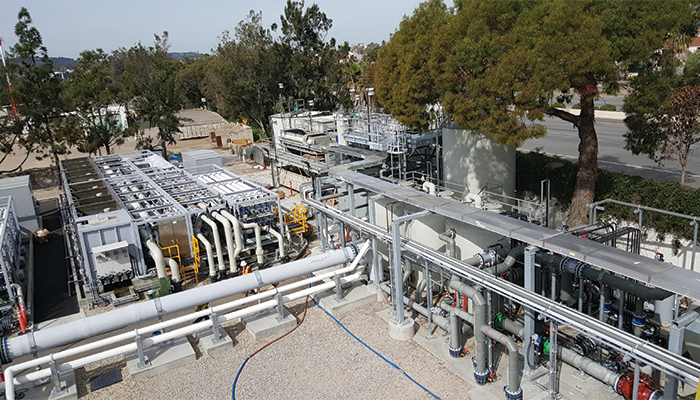 Water taps for the 4 million inhabitants of Cape Town, South Africa, could run dry as soon as July because of a sustained drought. São Paulo, Brazil’s largest city, has had water shortages so severe that armed convoys have had to accompany tanker trucks.

Those are not isolated cases. Droughts, pollution, and poor resource management have threatened water supplies in other cities as widespread as Cairo, Eqypt; Lima, Peru; and Mexico City, and in smaller cities and rural areas throughout much of the world.

Water projects to supply drinking water, hydroelectric power, and sewage treatment are major sources of shipments for engineering, procurement, and construction companies, and for forwarders and breakbulk carriers that deliver materials including pipes, turbines, and modules for water treatment plants.

Construction of new dams and reservoirs attracts attention because of their size, cost, complexity, and need for project shipments, often over long distances and difficult terrain. Heather Cooley, water program director at the Pacific Institute, said these projects are increasingly concentrated in developing countries that provide water along with reliable electrical power.

In many developed countries, such as the United States, dams and hydropower projects are no longer seen as the best way to generate water along with electricity. “They’ve already dammed up all the best sites — even some pretty bad ones,” Cooley said. “The cost of developing more projects is incredibly expensive, and the benefits that you get are less than previous projects.”

Although the era of big hydroelectric power construction projects has waned in many regions, new projects continue in countries such as Brazil, Colombia, Ethiopia, and Laos.

In Brazil, the Bel Monte plant on the Amazon will be the world’s fourth-largest in hydroelectric capacity and will have a cost that industry analysts say could top $18 billion. In Colombia, the $5.5 billion Ituango plant is under construction on the Cauca River. China Gezhouba Group Corp. is building the Genale Dawa III plant in Ethiopia. China’s Sinohydro is managing construction of the Don Sahong hydropower project in Laos.

China has been active in construction of water-related projects in developing nations in Africa and in countries such as Papua New Guinea, where China’s PNG Hydro Development is building the Edevu Hydro project, which will provide an alternative water supply along with electricity.

The World Commission on Dams estimated that hydropower capacity increased 2.6 percent, to 1,246 gigawatts, in 2016, the most recent year for which statistics were available. More than one-third of the increase was in China, which added 11.7 gigawatts. Other countries hosting new deployments included Ecuador, Ethiopia, South Africa, Vietnam, Peru, and Switzerland.

In addition to construction of new plants, existing facilities undergo periodic upgrading and maintenance, which also generates project cargo shipments. Two years ago, hydroelectric transporters moved via the Port of Vancouver, Washington, on an 11,341-mile transit from Sweden to Dalles, Oregon. The International Hydropower Association forecasts that by 2050, half of the current hydropower equipment in Latin America and Asia will undergo extensive modernization and maintenance.

Dams and hydroelectric plants are not the only source of project cargo related to drinking water. Henry Moreno, a water supply and sanitation specialist at the Inter-American Development Bank, said many Latin American cities such as São Paulo and Lima are suffering serious water shortages, not just because of short supplies but because supplies are unfit to drink.

Moreno said the most common reaction is to build hydropower and wastewater plants that address short-term water shortages but fail to address pollution, leaky pipes, and decrepit infrastructure. He said cities such as Panama City, São Paulo, and Medellín are working to reduce pollution and improving existing infrastructure in addition to adding supply.

In the United States, more than half of US municipal water and wastewater infrastructure is nearing the end of its useful life. Over the next decade, municipal utilities are expected to make about $500 billion in capital improvements to address US deteriorating water and sewer systems.

Since 1965, IDE has completed more than 400 water treatment plants, mainly desalination plants, in more than 40 countries worldwide, including Canada, Chile, Australia, and the United States. IDE’s recent major plants include facilities at Carlsbad and Santa Barbara, California, and Tianjin, China.

Ziv Shor, vice president of projects at IDE, disagrees with critics who argue that desalination is too expensive to meet the fresh water needs of more than a handful of countries where rainfall is scarce and there are no reliably rushing rivers to harness via hydropower.

Not every IDE plant is focused on producing drinking water. Last year, IDE announced that it was partnering with Taiwan’s Formosa Petrochemical Corp. to build a desalination plant that will produce high-quality water for industrial applications.

Previous projects include supplying high-quality boiler feed water and potable water to Indian conglomerate Reliance for its oil refinery in the state of Gujarat.

Although desalination plants are costly and take years to build, they provide reliable water supply, Shor said. “It is not just an issue of costs, but of water scarcity. If you have a drought, you don’t have to worry about access to water,” he said.

“We’ve seen over the decades that the cost of desalination is going down because of vast improvements in membrane technologies, such as very efficient energy-recovery devices and more efficient pumps,” Shor said.

But to remain competitive, IDE also has been working to reduce transportation and logistics costs. Like its competitors, IDE contracts with overseas firms, often in China, to fabricate the pipes, pumps, and pressure vessels that are then shipped to the sites where final assembly of the desalination plant takes place.

Traditionally, IDE and other desalination companies have shipped these pieces of their plants as breakbulk cargo. More recently, IDE has been trying to fit as many modules as possible into containers, in order to further lower its costs and shorten its shipping schedules. Shor said it is more efficient to prefabricate modules and test them in advance of shipment than to wait until the various components are connected at the plant site.

“We are going very far down the path of modularization,” he said. “Our competitors are doing similar things, but not to that extent. This is a transition that you see in the entire industry. It’s a huge engineering effort; it is not easy,” he said.

This makes shipping “a very big issue” in the desalination business. “I’ve told my workers that a seawater reverse osmosis project is basically a logistics project,” he said. Now that desalination technologies have been proved, he said, logistics “is the main challenge.”