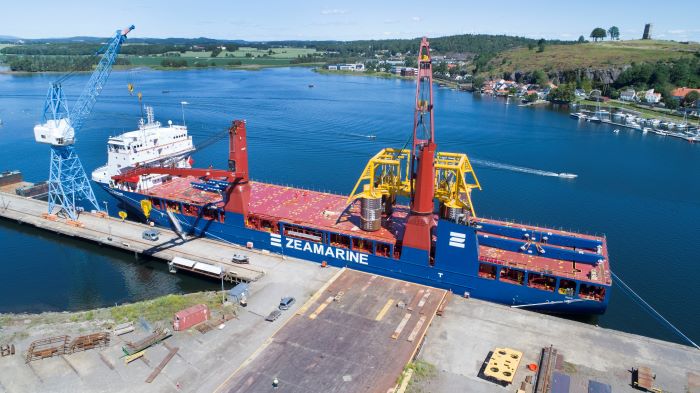 Zeamarine broke its public silence this week, issuing a statement on the restructuring that has been under way at the troubled multipurpose/heavy-lift (MPV/HL) carrier since before Christmas.

Zeamarine's booking and operations offices, represented by Zeamarine Bremen, Zeamarine Germany, and Zeamarine Chartering, will operate under court supervision and in conditions of creditor protection, the company said. Two bankruptcy filings and one insolvency filing were posted for the three entities in Bremen District Court on February 17 and 18, according to the court's website.

Neither Zeaborn Ship Management nor commercial manager Harper Petersen will be affected by the restructuring of the Zeamarine Group, the company said. Ten of Zeamarine's multipurpose vessels will be transferred to Hamburg-based HC Chartering, the statement said, not listing the vessels affected. The statement also said that Zeamarine had reached an agreement with the owners of the nine F-type vessels recently transferred or in the process of being transferred to United Heavy Lift.

In a sign of the difficulties facing Zeamarine, the MPV/HL ship Zea Gold has been arrested for “bunkers on board” at the Port of Rouen, France. This does not mean the bunkers were unpaid for, but rather that the entity prompting the arrest hopes to gain security for a claim against the charterer based on the charterer's property — bunkers — aboard the ship.

The Zea Gold's arrest was instigated by Nomadic Shipping and verified by a Port of Rouen spokesperson. Erik Thulin, managing director of Bergen, Norway-based Nomadic Shipping, told JOC.com his firm chartered two of its three multipurpose vessels, the Nomadic Hjellestad and the Nomadic Milde, to Zeaborn two years ago. In 2019, Nomadic renewed their charters with Zeaborn subsidiary Zeamarine, rather than with Zeaborn, at the carrier's request, Thulin said.

Zeamarine stopped paying Nomadic Shipping's daily hire in January and then essentially abandoned both vessels, one off the west coast of Africa and one off the coast of China, ceasing communication with the ships' masters and with Nomadic Shipping, Thulin said. Because of this, attorneys working for Nomadic Shipping had the Zea Gold arrested for bunkers on board in Rouen, with the result that the ship cannot leave the port until the parties have reached some agreement on the debt owed, he said.

Zeamarine declined to comment on the Zea Gold’s arrest when contacted by JOC.com.

Zeamarine's difficult financial situation began to become public knowledge in mid-December with the installation of Sven Lundehn, a Bremen-based tax- and crisis-management expert with Alldatax, as managing director. CCO Dominik Stehle and founder Jan-Hendrik Többe left during that time.

Többe and Ove Meyer, who resigned in July 2019, co-founded Zeaborn in 2013 and were two of three shareholders, with the third being majority shareholder and Bremen-based business developer Kurt Zech.

Zeaborn became one of the largest MPV/HL carriers and operators in the fleet through the acquisition of companies including Rickmers-Line, Intermarine, Rickmers Ship Management, E.R. Schiffahrt, and CPO Tankers. Intermarine and the Zeaborn fleet were combined to create carrier Zeamarine in 2018.

To many observers, the carrier seemed to lack a clear business strategy. “They bought all different vessel types and tried to combine them when they were very far apart in terms of market offering and culture,” one industry source told JOC.com. “To grow from 13 ships to 80 ships in two years — incorporating so many ships in a short time and creating a functioning operation — that’s very tough.”