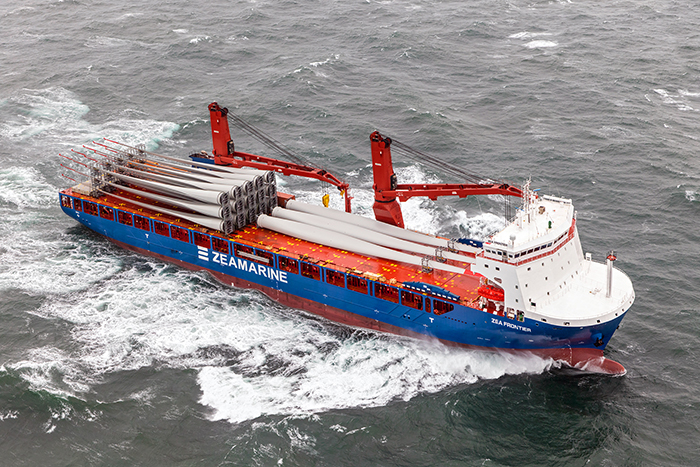 Zeamarine’s present fleet consists of about 90 multipurpose and heavy-lift (MPV/HL) vessels with lift capacities up to 1,400 tons, according to the company. Photo credit: Zeaborn.

Multipurpose and heavy-lift (MPV/HL) carrier Zeaborn Group will take full ownership of its Zeamarine joint venture (JV), pending approval by antitrust authorities, under an agreement to acquire the remaining interest in Zeamarine that is now held by New Mountain Capital.

Zeamarine’s present fleet consists of about 90 MPV/HL vessels ranging in size from 6,300 to 30,000 deadweight tons, with lift capacities up to 1,400 tons, according to the company.

In a March 2019 report from Netherlands-based shipping consultancy Dynamar, Zeamarine was ranked fourth in the global MPV/HL fleet in terms of deadweight tonnage, with 79 vessels in operation and three newbuildings on order. This varies from the carrier’s statement, but MPV/HL carriers take ships on and off charter constantly.

Dynamar reports that Zeaborn’s tonnage varies in age from one to 20 years, in size from 6,300 deadweight tons to 30,000 deadweight tons, and in lift capacity from 30 to 1,400 metric tons. According to Dynamar, Zeaborn is rumored, but not confirmed, to have another eight multipurpose ships on order from two Chinese shipyards.

Additionally, Zeaborn is “clearly gambling on the growing availability of distress tonnage,” the consulting firm said. Approximately 30 percent of the world’s multipurpose fleet is estimated to be unable to pay its debts, according to Meyer.