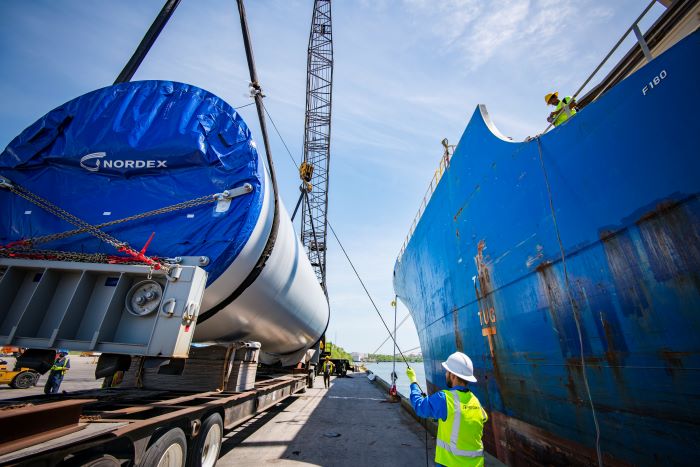 Toepfer Transport's Multipurpose Index (TMI) fell to $6,863 as of April 10, down 5 percent from mid-March, as the effects of the coronavirus disease 2019 (COVID-19) hamper the normal flow of business. Quarantine periods, port entry restrictions, cargo delays, travel bans, and other unusual barriers are hurting vessel operators’ ability to cover expenses, including daily ship charter rates. The TMI is down 9.8 percent year over year.

Yorck Niclas Prehm, head of research with Hamburg-based Toepfer, told JOC.com: “We see all the carriers being very upfront about pushing for lower rates … Operators are out there asking the owners for rate reductions,” he said.

The TMI is an average of time charter rates per day for six-to-12-month charters for geared, 12,500 dwt F-type multipurpose ships, workhorse vessels that comprise the “most liquid” slice of the multipurpose/heavy-lift (MPV/HL) sector, according to Toepfer.

Normally, the negative effects of a decline in demand show up in the MPV/HL sector after some delay, Prehm said. The eruption of coronavirus has played out differently. Fast-moving shutdowns or restrictions on port operations, manufacturing, and transport to contain the spread of the virus have had an immediate effect on the sector, he said.

While oil prices are a leading indicator for the project cargo transport market, the negative impact of falling prices will take longer to manifest. “At the moment, [oil] is only a psychological thing. The real damage will be in three to six months,” Prehm said. He expects the market to “see daylight” as recovery from COVID-19 begins — and “then we'll see the oil price impact.”

Too much oil, too many ships

He expects many planned oil and gas projects to be reviewed and possibly reduced. Cargo for already-sanctioned projects will continue to flow in the near term, but there will be less replenishing of the project cargo “pipeline” because many energy projects that would have been built later are likely to be cut or postponed.

Energy consultancy Rystad has estimated that a $30-per-barrel average price will lead upstream project sanctioning to shrink 68 percent, or down to $61 billion from an early 2020 forecast of $190 billion. If oil prices stabilize at $40 per barrel, sanctioned upstream projects could reach about $82 billion, Rystad estimates.

Falling freight rates could push an increase in demolitions and shrink the MPV/HL sector's chronic overcapacity, but the inability to organize normal crew changes due to COVID-19 travel bans is currently making scrapping impossible, Prehm said. One 30,000-dwt multipurpose ship was recently sold for scrap, but put back on the market because it can't be beached, he said.

“The decision to scrap a ship or not has to do with the earning capacity of the ship,” Prehm said. “If rates stay low, that's a stimulus to scrapping. There are many vessels out there that need retrofits. The money isn't there now [for retrofits], so why would it be there at a lower rate level?”

If the scrap price falls, the balance might change, but for now, “all we see is uncertainty at all levels,” he said.