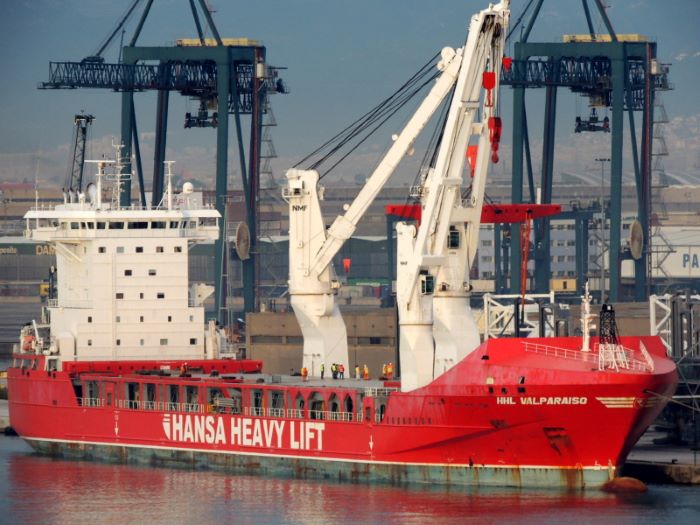 The former HHL Valparaiso, also operated by Zeamarine as the Zea Gold and Beluga as the Beluga Bremen, will join Spliethoff's fleet. Photo credit: Baltic Shipping.

The 2010-built, 19,413 dwt vessel has been renamed Palmgracht and joins four other P14-type vessels in the Spliethoff fleet. Each has a combined lift capacity of 1,400 metric tons.

The ship, which has been reflagged in the Netherlands, is currently in Rotterdam undergoing maintenance and will depart for its next project in May, Spliethoff said in a statement.

As the Zea Gold, the ship was arrested at the Port of Rouen, France, earlier this year in an action initiated by Norway-based Nomadic Shipping against Zeamarine in a dispute over unpaid charter hire. At the time, Nomadic Shipping managing director Erik Thulin told JOC.com that Zeamarine stopped paying charter hire in January for two vessels, the Nomadic Hjellestad and the Nomadic Milde, that were then essentially abandoned, one off Namibia and one off northern China. The Zea Gold was arrested in an effort to prompt payment of the unpaid charter hire.

Spliethoff's acquisition of Palmgracht coincides with the opening of a representative office in Singapore by affiliated specialist heavy-lift carrier BigLift Shipping.

The new office, under the banner BigLift Shipping Southeast Asia, is located in Singapore's central business district and will be headed by Henry Woo, who plans to strengthen BigLift's services in southeast Asia.

Woo was previously head of Asia-Pacific for Hansa Heavy Lift. Prior to that, he was regional head of business development for both DHL Global Forwarding Management (Asia-Pacific) and BBC Chartering, according to his LinkedIn profile.