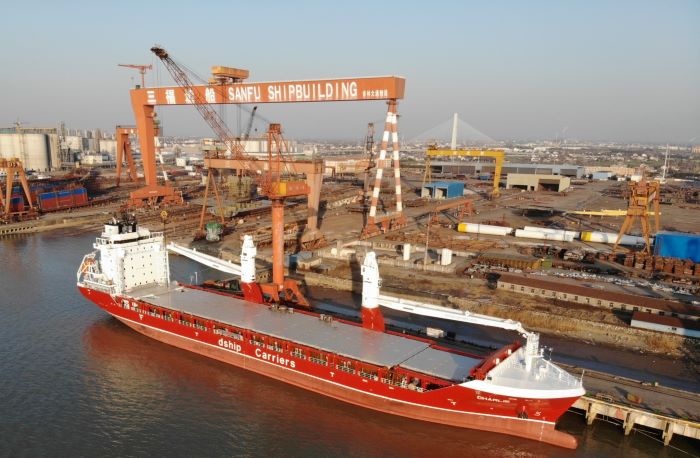 The “spillover” market, which has been pushing both containers and some formerly containerized cargo into the multipurpose sector since late 2020, may be easing slightly as container spot rates soften from their late-2021 peak.

While both Toepfer’s and Drewry’s June multipurpose indices are holding at elevated levels, Drewry’s World Container Index, at $7,626 as of June 2, is down 26.51 percent from its high of $10,377 on Sep. 23. Shippers that normally move their cargo in containers but have resorted to breakbulk modes in today’s congested and unreliable shipping market can be expected to shift at least some cargo back to boxes as spot rates soften on some trade lanes, Susan Oatway, senior analyst for breakbulk and project cargo with Drewry, told JOC.com.

The latest multipurpose index from the London-based maritime consultancy, released Tuesday, was off a slim 0.45 percent for the month, or from $11,170 per day in April to $11,120 in May. Drewry predicts that gentle slide to continue into June, with the index falling 0.6 percent to $11,050 per day. On the multipurpose side, demand remains high and there is still very little tonnage available in the spot market, Oatway said.

Overall, Drewry expects its MPV index to remain essentially flat, albeit at this year’s elevated levels, through the summer. Pre–COVID-19, it was normal to see a “summer slump” in the MPV market, but because of the supply chain backlog there was no slump in 2021, and Oatway does not expect one in 2022.

“No spike, but no summer slump either,” she said. Rates will tail off, but there will not be any big movements until the end of the year as congestion unwinds, Oatway added.

Although Shanghai has reopened following extensive COVID-19 lockdowns in April and May, Drewry does not expect to see a flood of related container cargo. China’s low purchasing manager’s index (PMI) implies that there is no huge backlog of goods to be released. “There will be some extra movement, but it won’t push rates up,” Oatway said. “Rather, it will keep them steady when they could have been on the wane.”

According to Hamburg-based Toepfer’s June report, vessel operating costs are up thanks to rising bunker prices, but charter rates are firm at high levels because demand for tonnage remains very strong. New ship construction activity is still very slow, inflated materials costs continue to push up the cost of new ships, and second-hand prices are climbing steadily, the report said.

The TMI, which covers a narrower MPV segment than Drewry's index, is based on an average of daily charter rate forecasts for “workhorse” 12,500 dwt geared MPVs, a ship type currently in high demand. To produce the TMI, vessel owners, operators, and brokers provide Toepfer with their forecasts for six- to 12-month charters. The TMI now also includes projections for six and 12-month average rates, expressed as relative growth or decline compared with the current TMI value.

How to Improve OTIF: 15 Tips for On Time and In Full Delivery
END_OF_DOCUMENT_TOKEN_TO_BE_REPLACED