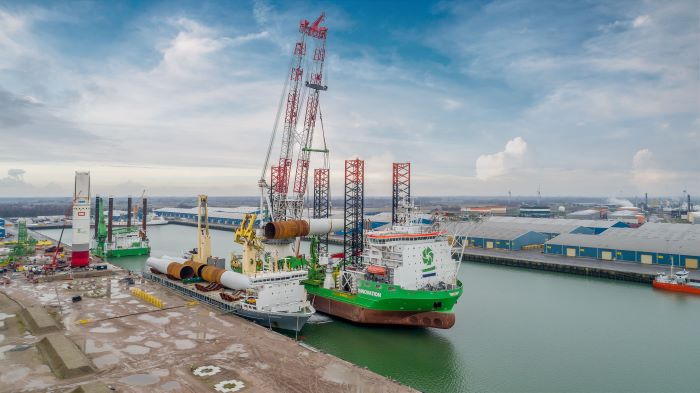 A three-month rally in daily charter rates for geared, 12,500-metric ton F-Type ships will hold through September, according to the Toepfer Multipurpose Index (TMI) released Monday.

Yorck Niclas Prehm, Toepfer's head of research, sees a three-tiered multipurpose/heavy-lift (MPV/HL) market, with the “usual suspects” — the flexible F-type ships on which the index is based — in the middle tier. An upper tier of super-heavy-lift carriers equipped with dynamic positioning systems that allow them to hold position in deep water is able to earn good money despite the oil and gas downturn, primarily by transporting and, in many cases, installing offshore wind components and foundations. But a lower tier of “more bulkish” operators is suffering, Prehm told JOC.com.

The super-heavy-lift ships can lift from 550 metric tons to as much as 3,000 metric tons. In many cases, “the cranes are able to work under water, and when [they are] using fly jibs, the very high hook height over deck enables them to install even very long and heavy monopiles” for offshore wind, Prehm said. Specialized carriers such as Jumbo, SAL, and BigLift operate these types of ships.

According to the website of Hong Kong–based bulk carrier Pacific Basin, as of Sept. 11 the average daily time charter rate for 38,000-dwt bulkers was $9,571, while it was $7,704 for 28,000 dwt bulkers. These ships, which often have no cranes or cranes that lift 100 metric tons or less, compete for bulk and some breakbulk cargoes with the less-specialized slice of the MPV/HL sector. The Baltic Exchange Handysize Index (BHSI), a measure of spot freight earnings for 38,000-dwt dry bulk vessels, was at 560 on Sept. 11, according to Pacific Basin. The BHSI, up 49.7 percent from April and 77.8 percent from June, is recovering from a precipitous COVID-19-driven slide.

Prehm said in a recent industry analysis that he sees further potential disruption ahead for the MPV/HL sector, as deck carriers nudge into space traditionally held by MPV/HL ships. Deck carriers are simpler and cheaper to build than MPV/HL ships and normally have ample space for wind cargo. If ports can be relied on for sufficient lift capacity, large, gearless vessels begin to make more sense for shipowners and operators, he said.

The TMI, compiled by Toepfer, reflects expected average time-charter rates per day for 6- to 12-month charters for 12,500 dwt F-type MPV/HL ships with 240–360 metric tons combined lift capacity, the most liquid "workhorse" slice of this fleet in Toepfer's view. The TMI, based on information from owners, operators, and brokers, is a window into chartering rates for that privately held shipping sector.

Global Shipping Outlook: A Sneak Peek at 2021
Port Performance North America: Managing Cargo Flow During a Pandemic — and Beyond
END_OF_DOCUMENT_TOKEN_TO_BE_REPLACED