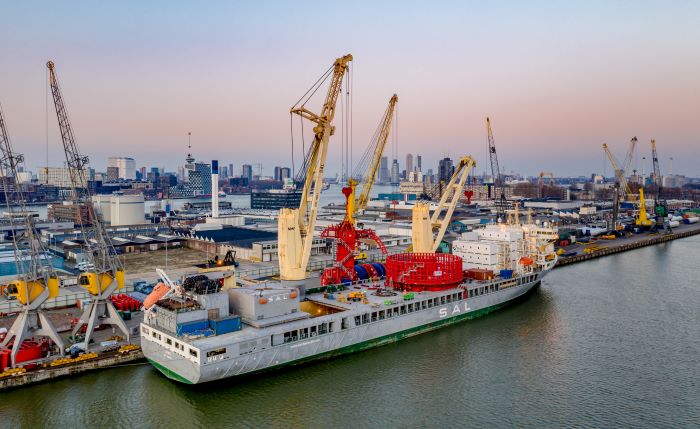 Super heavy-lift carrier SAL has acquired a “major stake” in US Gulf-based multipurpose and heavy-lift (MPV/HL) carrier Intermarine, SAL said Monday. The carriers will join forces to focus on the Americas and cross-Atlantic trade. Terms were not disclosed.

SAL also announced that Svend Andersen, the former CEO of BBC Chartering who retired in 2019, is joining Intermarine as CEO and is also one of three shareholders. Andersen, who spent four decades in the breakbulk and project cargo carrier industry, was succeeded at BBC by Ulrich Ulrichs.

Andersen said he invested in the venture because he sees “great prospects in bringing the Intermarine brand and business onwards under the helm and support by SAL Heavy Lift as a top brand in the heavy lift shipping industry.” Intermarine is now owned by SAL, Andersen, and a private investor, according to Christian Hoffman, head of marketing and corporate communications with SAL. The breakdown of shareholdings was not disclosed.

“We have for a while been looking at expanding our services in the Americas, and with Intermarine now being part of the SAL Group, we can enable further trade across the Atlantic, combining important trade between Africa, South America, North America and Europe,” SAL CEO Martin Harren said in the statement.

Intermarine will operate as an independent brand within the SAL Heavy Lift Group, tying its Americas Liner services to SAL's global heavy-lift trade. Richard Seeg will serve as president and Chad Call will be CFO and vice president. Intermarine's focus will not change, according to the statement. It will continue to provide breakbulk liner services deploying MPV/HL ships between North and South America and the Caribbean, as well as operating an intra-South America trading network.

SAL Heavy Lift, part of the Bremen-based Harren & Partner Group, specializes in the global transport of heavy lift and project cargo and in offshore projects. It is a dominant global operator of vessels with lift capacities of up to 900 mt, a small and very specialized segment of the MPV/HL sector. Combi-Lift is also part of Harren & Partner Group.

“Having SAL as an organization behind the activities of Intermarine brings with it a wide range of commercial opportunities,” Seeg said in the statement. “SAL holds one of the most comprehensive sales networks globally, and they also bring vessels, world-class engineering capabilities, and other resources that are extremely valuable to the commercial setup of Intermarine.”

Hoffman told JOC.com South America held an attraction for SAL, as it is “a market where SAL has not been particularly present…. SAL sees opportunities in expanding its trade across the Atlantic via Europe and Africa and through the established sales setup we hold in these market spaces,” he said.

SAL has had the cross-Atlantic trade on its strategic roadmap as a market to expand into and operate more frequent sailings, while Intermarine will benefit from sitting within a larger organization, Hoffman said. For SAL, this is as much about tying in the cargo trade from Europe and Africa to the Americas as it is utilizing Intermarine’s big network in the region to support outbound voyages with breakbulk or parcel cargoes, he added.

Hoffmann said the expansion of the US renewable energy market, especially on- and offshore wind energy, plus the development of new energy resources including liquefied natural gas, create opportunities. “SAL will be in the market to provide the technical heavy lift solutions, and Intermarine can combine cargo trade [for] outbound Americas,” he said.

Intermarine in April announced an agreement with United Heavy Lift in which it appointed Rene Pedersen, director of chartering, as exclusive commercial agent in North America. Hoffman said this relationship still exists and that "we are taking an open approach" and are talking with UHL about the future setup.

Asked if the venture with Intermarine was happening at a time when the US market was already crowded, Hoffmann said: “SAL has been in the US in its own right since 2009, so the US market is not a new market to us. But we see that we can utilize synergies between Intermarine’s customers and our own. These customers are more complementary in nature and don’t really overlap.”

Global Shipping Outlook: A Sneak Peek at 2021
Port Performance North America: Managing Cargo Flow During a Pandemic — and Beyond
END_OF_DOCUMENT_TOKEN_TO_BE_REPLACED