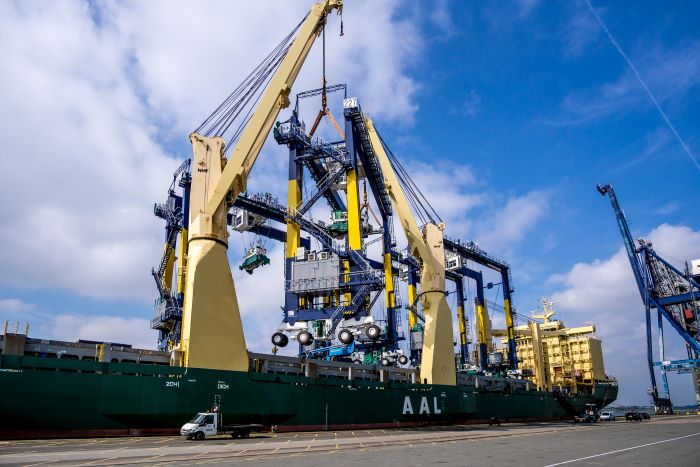 Multipurpose and heavy-lift (MPV/HL) carrier AAL has announced the addition of a new monthly project and breakbulk cargo liner service that will connect Europe, the Middle East, India, and Asia beginning February 2020. The service will follow a fixed route, but port calls will be flexible, the company said in a statement.

Singapore-based AAL will deploy its 31,000 dwt “A-class” vessels with 700 tons of lift capacity in the service and is already booking cargo ahead of issuing an initial schedule.

Kay Goldenstein, recently of Zeamarine, will be responsible for the new service as chartering manager out of AAL's Hamburg office, the company said. Goldenstein was formerly senior line manager with Zeamarine and prior to that was line manager for Rickmers-Line. Rickmers Line (formerly Rickmers-Linie), which operated an around-the-world breakbulk and project cargo service using 30,000 dwt vessels, was bought by Zeamarine in 2017.

In January, Zeamarine reinstated the old Intermarine brand for its Americas services and appointed Richard Seeg as CEO. The holding company is Industrial Maritime Carriers; ownership structure for the holding company has not yet been publicly clarified.

Meanwhile, ex-Zeamarine/Intermarine sales director Fernando Maruri last month announced the startup of a new multipurpose carrier in the US Gulf, known as King Ocean Gulf Alliance (KOGA) Shipping. Maruri, who is CEO and president of KOGA, told JOC.com he expects to charter in vessels in the 8,000 to 12,000 dwt range through partner King Ocean Services, based in Miami. Cargo chartering will be handled through KOGA's Houston office. Maruri told JOC.com he expects to announce KOGA's first voyages in March.

These are the latest ripples from the drama unfolding at Zeamarine, which appeared on the scene in 2013 as Zeaborn, grew rapidly through acquisitions, and had seemed set to be a major player in the MPV/HL fleet. Namir Khanbabi, former director of chartering and operations with AAL, left that position in November to become regional director for Asia and Oceania for Zeamarine. Shortly afterward, CCO Dominik Stehle resigned suddenly from Zeamarine, and the present restructuring began under Sven Lundehn, a tax expert and managing director with Bremen-based crisis management consultancy Alldatax.

Zeamarine has shared little public information about the restructuring, which is still under way.