Automakers try to put brakes on potential US tariffs

Automakers try to put brakes on potential US tariffs 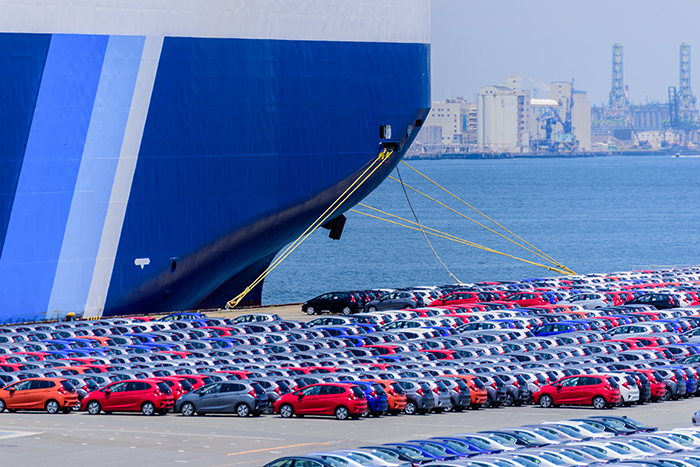 US trade in automobiles slipped 4.1 percent year over year to 8.26 million metric tons in 2018, according to PIERS. Photo credit: Shutterstock.com.

The US automotive industry and an assortment of industry stakeholders are escalating efforts to keep the government from imposing threatened import tariffs of up to 25 percent on assembled cars and parts.

The pushback against potential tariffs comes after US trade in automobiles slipped 4.1 percent year over year to 8.26 million metric tons in 2018, according to PIERS, a sister product of JOC.com within IHS Markit. Vehicle imports were relatively flat compared with 2017, but exports slumped 16 percent for the year.

The ports of New York-New Jersey, Jacksonville, Los Angeles-Long Beach, Baltimore, and Brunswick, Georgia, retained their respective status as the top five auto ports in 2018, accounting for 54 percent of total tonnage handled. Export tonnage was down across the board at New York-New Jersey, LA-Long Beach, Brunswick, and Baltimore, as well as at Savannah and Charleston, which fell out of the top five. Of the large southeastern US auto ports, only Jacksonville saw an upswing in export volume in 2018, according to PIERS.

At a time of slowing global economic growth, the cooling auto market is already casting a shadow. Unlike in the steel industry, there is no US industry segment that would immediately benefit from the threatened tariffs. The industry backlash is growing, according to Bloomberg, which reported in March that a dozen carmakers have joined an alliance against import tariffs.

The Commerce Department in February submitted the results of its investigation into whether auto imports pose a national security risk, the same justification used in imposing the steel and aluminum tariffs. President Donald Trump has until May 18, with a further grace period, to decide whether or not to impose tariffs based on the report. The issue then moves to Congress.

German Chancellor Angela Merkel said recently that the suggestion German auto imports are a security threat is “shocking,” and the EU is preparing approximately 20 billion euros ($23 billion) in retaliatory tariffs on US goods if Trump follows through with his threats, Bloomberg reported. Autos are a crucial element in US-EU trade talks, but the US is also looking for concessions in other sectors, including agriculture, which the EU does not appear interested in giving.

The tariff situation is fluid; when and how they would be applied remains unclear. The Section 232 measures may only be applied to assembled vehicles, not parts, which would greatly reduce the impact on automakers’ supply chains, but would expose importers — particularly German importers — to significant pricing risk. BMW, for example, produces sport utility vehicles in the US, but imported about 67 percent of its total US sales in 2018. Daimler AG imported about 63 percent of its US sales, while Volkswagen imported about 36 percent, according to IHS Markit data.