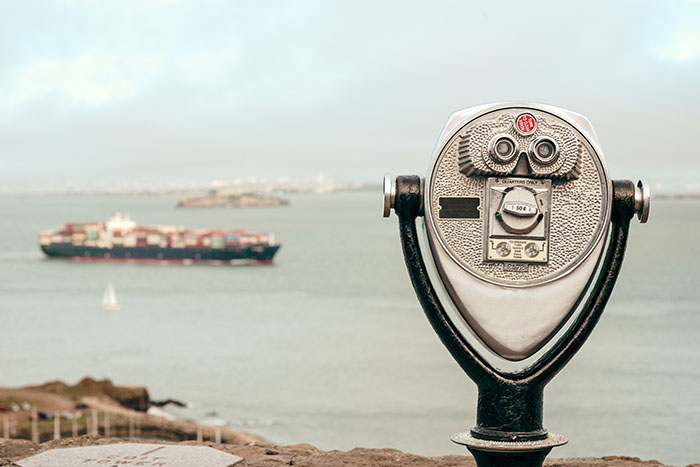 Shippers tell JOC.com they eventually will expect to procure visibility as part of a broader offering, like a transportation management system (TMS) or a 3PL’s technology stack. Photo credit: Shutterstock.com.

This story appeared in the print edition of the Jan. 6, 2020, The Journal of Commerce Annual Review and Outlook.

Shippers’ ability to achieve visibility of their containerized goods has traditionally been defined by a simple, but tough-to-overcome, problem: No one entity controls all the data required to provide a complete view of in-transit goods.

Ocean carriers control data while the ship is on the water; the origin terminal controls it before the container is loaded on the vessel, the destination terminal when it is offloaded, and additional terminals for containers that are transshipped. For connections to and from ports, drayage, short-haul truckers, and railroads have custody of it.

Wrangling data out of any two of those entities — much less all of them — is a monumental task that has often eluded even the top global third-party logistics providers (3PLs), companies whose whole reason for existing is coordinating the movement of freight for shippers.

Given this, it’s probably time to stop thinking of visibility as something that a single entity can offer and start thinking about visibility as something that a shipper — or a 3PL in an outsourced arrangement — by definition needs to pull together using data from multiple sources. If that sounds daunting, it’s less so in 2020 thanks to recent technological developments.

For starters, web-based, cloud-hosted platforms providing data are so ubiquitous now that information from different providers can be more easily integrated to generate usable visibility information. If a shipper or 3PL lacks the internal resources to manage those integrations, as many do, there are integration software providers that specialize in establishing and maintaining those connections.

As one visibility provider put it to JOC.com, “Data across modes is not really the prize. Being able to do something with the data is the end goal.”

Traditionally, “end-to-end visibility” tools have focused on insight into the location of the goods as the finish line when, in reality, that’s just the starting point. The visibility provider said shippers are inclined to pick a provider they have confidence in, even if that provider’s solution is limited to one mode.

For example, FourKites and Ocean Insights in October formed a partnership linking the former’s surface transportation capabilities with the latter’s data on ocean freight. The agreement is meant to provide joint customers with a cohesive view into cargo delays and predictive estimated times of arrival (ETAs), so the ocean freight leg can be more directly connected to the inland legs. It’s emblematic of the need for startups to partner to amplify one another’s customer channels and the chronic difficulty for one provider alone to provide visibility across multiple freight modes and geographies.

These developments seem particularly noteworthy in light of JOC.com conversations with shippers around whether they prefer to procure visibility as a standalone tool or as part of a broader offering, such as a transportation management system (TMS) or a 3PL’s technology stack. Those shippers have said they eventually would expect visibility to be bundled into a service or system they already use, and not be an additional line item.

This builds on a couple key ideas: that different pockets of containerized cargo visibility should be seen as puzzle pieces to be assembled, and that no one entity has all the pieces.

One other element to consider is the rise of sensor- and image-based visibility data. In 2019, companies offering physical sensors finally began to gain traction among container lines, 3PLs, and even shippers. With the exception of refrigerated and other time-sensitive or high-value goods, physical sensors have yet to make a huge dent in the market — some estimates have proliferation below 2 percent of the global fleet.

But tangible investments in sensors and imaging technology that automatically capture container identifiers at port and intermodal facilities will provide rocket fuel to visibility initiatives in the form of accurate, real-time information about the location of containers. Accurate data isn’t just useful in the moment; it’s also necessary to build predictive data models to enable ETAs that are more accurate and can be provided further in advance.

The question then becomes how this all gets bundled for shippers. Outside of more typical arrangements, such as a visibility aggregator that generates some data and secures the rest, or a 3PL that itself acts as the aggregator, shippers can attempt to assemble the data. Redwood Logistics, for example, in November announced it was offering a data integration-as-a-service product, even for companies that don’t use its freight brokerage or 3PL services.

The end goal is helping shippers serve their own customers better, the visibility provider told JOC.com. Visibility data isn’t just about internal efficiencies and reduced inventory, but about conveying data to customers and suppliers to improve the overall end-user experience.

Call it the “Amazon effect,” or “the new normal.” Shippers don’t operate in a vacuum anymore, even if the silos of visibility still persist.

Transforming Transportation and Logistics Through the Lens of the Pandemic
Jun 23, 2020 2:00PM EDT
Register Now »