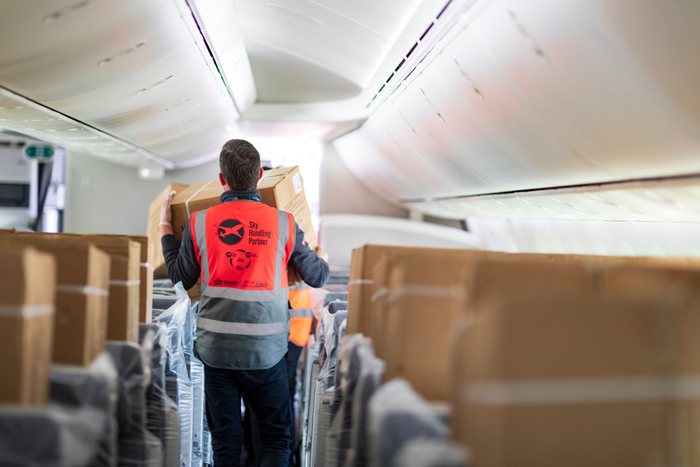 Passenger planes carrying only cargo are providing urgently needed capacity to the air freight market, but the loading and unloading process is inefficient and heavily dependent on manpower. Photo credit: Shutterstock.com.

High air cargo load factors on trans-Atlantic routes are keeping rates elevated into June, with capacity so tight that not even a sharp decline in volume over the past week has been able to soften prices.

The dynamic load factors, based on cargo flown and capacity available, stood at 91 percent on Europe-US routes in the last week of May, 27 percentage points higher than during the same period last year, according to air cargo analyst CLIVE Data Services. Backhaul eastbound trade load factors were almost 30 percentage points above those of last year.

This was despite a 35 percent decline in Europe-US volume from May 25 to May 31 compared with the previous week, and a 20 percent drop in eastbound volume.

“The main reason behind this increase in load factors is the larger drop in capacity than the drop in volumes,” explained CLIVE Data Services managing director Niall van de Wouw.

The trans-Atlantic aviation market is one of the busiest passenger trade lanes in the world, with thousands of frequent, scheduled flights and direct city-to-city connections offering a highly attractive belly cargo option to shippers. COVID-19 travel bans imposed in March reduced overall capacity across the Atlantic by about 60 percent overnight, sending freight rates soaring.

The capacity-demand imbalance kept Europe-US prices above 2019 levels through May, and the rates strengthened further into the first week of June, according to data from the TAC Index. Europe-US air cargo rates on June 1 were $4.70/kg, up 4 percent on the previous week and 195 percent higher year over year. After reaching a record high of $5.23 on April 13, the rate fell slightly to $4.11/kg in the first week of May before increasing steadily through the month.

Even as volumes decline, most of the air cargo on the trans-Atlantic continues to be shipments of personal protective equipment (PPE) to help fight the coronavirus disease 2019 (COVID-19), with some general cargo beginning to enter the market, said Peter Stallion, air cargo analyst for Freight Investor Services (FIS).

But he said apart from supply and demand fundamentals, the other factor influencing freight rates is the baseline operating cost of the many reconfigured passenger planes operating as cargo-only carriers.

“The operating cost per kilogram of passenger freighters is substantially higher and flights cannot be run at a loss on schedule for very long, so you would expect the price to be held up at a higher level to reflect this new dynamic,” he said.

Glyn Hughes, head of cargo at the International Air Transport Association (IATA), explained in a JOC Uncharted interview Wednesday that the loading of cargo on passenger aircraft compared with freighters was a manpower-intensive and inefficient process.

Of the 1,300-plus passenger aircraft currently flying cargo, many on Europe-US routes, Hughes said about 70 have had their seats removed to make the aircraft more cargo-friendly, but he noted structural differences that complicate the conversion from passenger to all-cargo craft.

On converted passenger craft, “They're still loading through a door, so you have to change how you load the cargo because you are effectively building up pallets onboard and they have to be secured,” Hughes said. “Airlines also need to have crew on board because there is no fire detection system, so you've got to have cargo marshals to supervise the loads during flight and make sure there are no fires, and that the cargo remains intact and secured”

As airlines try to make greater use of their grounded passenger fleets, news from IATA that April was likely the peak of the coronavirus impact on their operations may provide some comfort.

“April was a disaster for aviation, but April may also represent the nadir of the crisis,” Alexandre de Juniac, IATA’s director general and CEO, said in a statement this week. He added that flight numbers were increasing, countries were beginning to lift mobility restrictions, and business confidence was improving in key markets such as China, Germany, and the US.

“These are positive signs as we start to rebuild the industry from a stand-still. [But] the initial green shoots will take time — possibly years — to mature,” he said.

CLIVE’s van de Wouw took an equally downbeat view of the recovery in demand. “Looking at the last 12 weeks, it is clear to see that market volumes remain erratic and that this will continue for the foreseeable future. This is one of the few certainties we have at the moment,” he said.