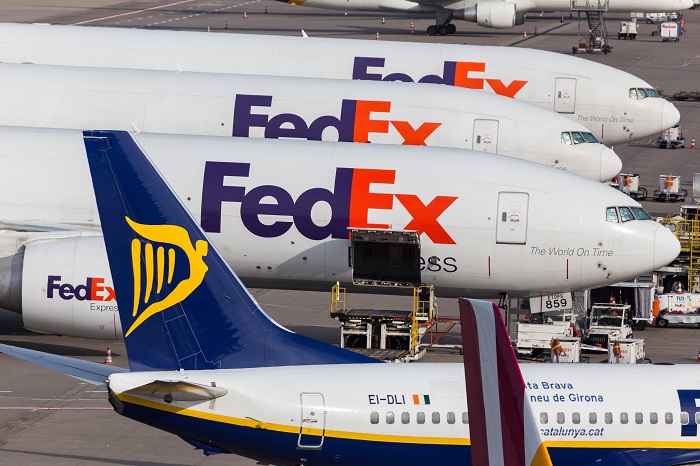 A slight dip in demand for air cargo in the first quarter was quickly reversed with volume steadily increasing on the east-west trades. (Above: Air cargo being loaded in Germany.) Photo credit: Shutterstock.com.

The trade dispute between the United States and its major trading partners has done little to dampen air cargo expectations for the second half and into the end-of-year peak season, with the strong demand in the first six months expected to continue, keeping space tight and rate levels rising.

A slight dip in demand for air cargo in the first quarter has quickly reversed, with volume steadily increasing on the east-west trades. According to the latest data from the International Air Freight Association, global air cargo demand measured in freight ton kilometres is currently where it would have been had the late-2017 upward trend continued unchecked by the traditional post-Chinese New Year slump.

Average air freight rates remained stable for the three months up to the end of June, with Freightos reporting rates of $2.80 to $6.00 per kilogram (about $1.30 to $2.80 per pound) on the China-Europe trade, and $1.60-3.00 per kilogram on the China-US routes. Express rates from China to Europe rose $1 per kilogram in late June, which Freightos believes could be a rush to deliver shipments before Europe factories close for the summer holidays.

In Asia, where more than 40 percent of the global air cargo market share is handled, the carriers reported a first half with demand growing by 5 percent above what was a very strong upswing in 2017, said Andrew Herdman, director general of the Association of Asia Pacific Airlines.

“Global economic prospects remain positive, anchored on expectations of firm domestic demand across regions, despite some concern over the possible adverse effects of trade tariffs,” he told JOC.com.

What those effects will be remains unclear, and it is weighing on the minds of the transport and logistics executives. Kuehne + Nagel CEO Detlef Trefzger said in an earnings call transcribed by Seeking Alpha that growing world trade and high consumer confidence and ongoing spending made the company confident for the second half.

But he acknowledged the difficulties introduced by the trade dispute. “We see that there's more uncertainty because there's a lot of noise in the market at the moment versus six months ago,” he said.

“We expect GDP and world trade continuing to grow. We accept that there's a certain uncertainty. Do we know whether these outlooks are true or not? We don't know. That's market. Our ambitions stay, grow, grow organically, maybe try as fast as the respective market. That's true for all of our business units.”

Herdman said that while the political rhetoric over trade relations and the threat of new tariffs was a cause for concern for air cargo carriers and their customers, it had not yet had any visible impact on actual trade flows or consumer behavior.

“So far there is no evidence of any impact on the air cargo business, perhaps because the classes of products being subjected to tariffs are mainly transported via ocean shipments,” Herdman said. “Nevertheless, the risk of tit-for-tat reactions may see a further escalation, spreading to a variety of sectors, with potential adverse impacts on trade flows, including disruptions to long-established global supply chains. International companies will react accordingly, responding to the resulting distortions in relative prices by evaluating alternative suppliers and reorganising production arrangements where necessary.”

Herdman added, “Trade wars are too often viewed as reflecting friction between competing producers, but the real negative impact is borne by consumers who are confronted by higher prices and fewer choices, serving no one’s long term interests.”

Atlas Air: to date, no specific impact on air cargo

A spokesperson for global air charter carrier Atlas Air said it was watching the trade dispute developments closely, “along with just about everyone else,” but had also not seen any specific impact on air cargo.

“Since airfreight is a global business, which regions and which products might be affected would depend on what tariffs are or might be imposed, and by whom and against whom. Based on the rhetoric to date, the major east-west trade routes across the Pacific would be a focus, as well as those across the Atlantic,” the Atlas spokesperson told JOC.com.

Rising volume through most of 2017 kept available capacity under severe pressure, but it was at the end of the year when shippers really began to feel the impact as air cargo rates soared to unprecedented levels and space dried up. Delays of 15 to 20 days were reported out of China airports during November to December as fast growing e-commerce combined with general cargo to generate high levels of traffic, and air freight rates on the busy China-North America routes shot up to $12 per kilogram.

Somewhat ominously for shippers, Atlas Air is expecting another solid peak season this year, “with freight rates and space availability to reflect that.” According to derivatives broker Freight Investor Service, forward rate deals for August on China-Europe is at $2.85 per kilogram, rising to $3.05 in September, and $3.70 per kilogram in December.

However, on the space issue, Herdman said the air cargo industry had responded to the growth in demand for air freight by offering additional capacity, including belly space in growing numbers of passenger aircraft on major routes, as well as dedicated freighter operations, where daily utilization has also increased.

“The slightly slower rate of growth in air cargo demand in recent months has corresponded with a small decline in cargo load factors, suggesting that capacity is well matched to serve the expected level of demand as we move into the coming peak season,” he said.