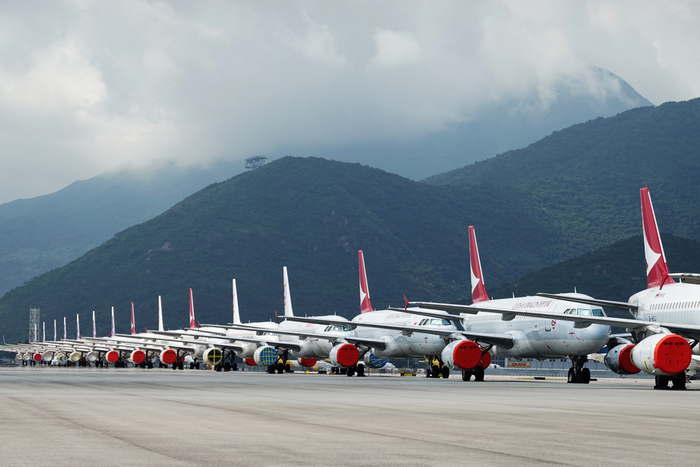 Passenger aircraft lie idle on the tarmac at Hong Kong International Airport. Travel bans to many destinations have devastated the airline business, with IATA not expecting passenger travel to return to 2019 levels before 2023. Photo credit: Shutterstock

An almost complete lack of clarity on air cargo market demand, capacity levels, and expected rate levels has left the air freight industry with little on which to base third-quarter forecasts and airlines struggling to provide reliable schedules.

“Carriers will be booked out until around mid-to-end June, so there will be some buoyancy in rates until then, but after that point it’s anyone’s guess,” Peter Stallion, head of air cargo at derivatives brokerage Freight Investor Services (FIS), said during a JOC Uncharted interview Wednesday.

The only real consensus among industry executives is that the current demand for urgent medical supplies being transported to countries battling the coronavirus disease 2019 (COVID-19) will start to drop off from mid-June as Europe and North America continue to ease lockdown restrictions. But what happens after that depends on a set of factors that are difficult to predict.

As more economies come back online and their retail outlets reopen, demand for more general air cargo will return, but how strong this demand will be from recession-hit economies battling high levels of unemployment is unknown.

“The world is in a recession state at the moment and we don't know what the volume and demand is going to be like on the other side,” Stallion said. “When non-essential businesses start to reopen again from June onwards, such as clothes shops and tech shops, if they see a lot of demand, there will be a rush for volume that will need to move by air freight. It is all unknown, so you can't really plan for it.”

Edward DeMartini, head of air freight development at Kuehne + Nagel North America, said demand for personal protective equipment (PPE) would start to wane in terms of the type of medical equipment required. Demand for items such as rubber gloves or medical gowns would fall as people moved back to offices, while it would increase for masks that might need to be worn in public.

DeMartini said there was no doubt that demand would return, just the scale of the volume was unclear. “You just need to look at what a lot of governments are doing in terms of the fiscal stimulus spending to keep businesses whole and to try to encourage them to come back,” he told JOC Uncharted.

Coupled with uncertainty over volume levels through the third quarter is an inability to predict capacity levels. On the east-west trades, at least half of all air cargo capacity is provided by passenger flights, and virtually all those aircraft have been grounded since travel bans were imposed in early March.

Glyn Hughes, head of cargo for the International Air Transport Association (IATA), told JOC Uncharted the return of passenger travel at scale may not happen for a long time.

“The optimistic forecast is that it will take three years for passenger numbers to get back to the 2019 levels,” he said. “I've seen more pessimistic views which say five or six years.”

The result, Hughes noted, was that the belly cargo capacity of these grounded aircraft was designed for 2020 volume, “and you can't afford to fly 2020 volume of cargo for 2015 or 2016 volume of passengers.”

“There are more than 120 airlines that have over 1,300 passenger aircraft that have been mobilized to operate in a cargo-only configuration,” he said. “That in itself is incredible, but it is also critical because when factories start normal operations and supply chains are back up, the passenger network is not going to be the same size and the global connectivity is not going to be there. A significant number of these passenger aircraft carrying cargo will remain.”

The slow return of passenger flights can be seen in the third-quarter plans of some major carriers. Lufthansa Group and its carriers — Lufthansa, Austrian Airlines, Brussels Airlines, Swiss, and Eurowings — have announced new June schedules, and while most are to holiday destinations, the group has opened 34 long-haul destinations.

IAG Group, parent of British Airways, Iberia, and Aer Lingus, expects 55 percent of its passenger capacity to remain parked in the third quarter, while Air France-KLM expects its capacity during the same period to be reduced by 80 percent.

Such a lack of clarity around supply and demand makes air cargo rates difficult to predict. “The air freight market today is really, really crazy in terms of rates, and no one knows what's going to happen in the next 12 to 18 months, so it will be interesting to see,” Stallion said.

Rates on the trans-Pacific and China-Europe trades have fallen in the past week, according to the TAC Index, especially on the China-North America trade where rates assessed on June 1 were at $7.62/kg, down 30 percent on last week. China-Europe rates are $8.65/kg, down 11.8 percent compared with last week. Rates on Europe-US trades were up 4 percent compared with last week at $4.70/kg, which was up 195 percent year over year.