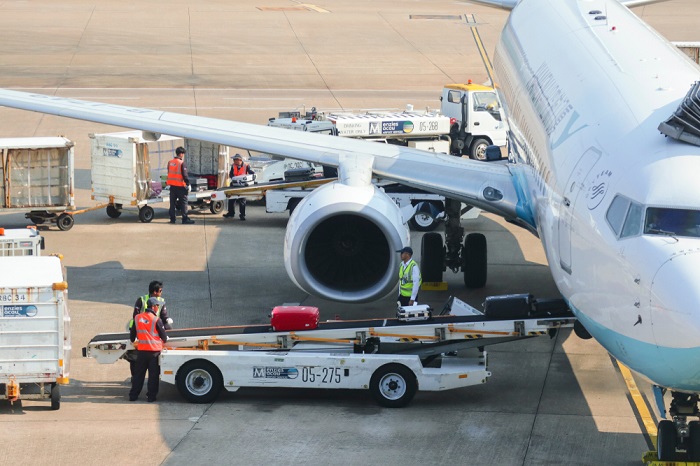 Caught up in the wide net cast by the tariffs were electronics and other higher-value consumer products traditionally shipped by air, and after ignoring the trade war for months there was a 4.5 percent increase in China-US demand in October. (Above: Air cargo being loaded in China.) Photo credit: Shutterstock.com.

Trans-Pacific air freight has started to feel the impact of the US-China trade war, with strong October demand fueled by the now-postponed threat of an escalation of US tariffs leaving air cargo operators and forwarders expecting “slow but steady” growth through the peak season.

Fears that the US would increase tariffs on products from China from 10 percent to 25 percent — a move that has now been placed on hold for 90 days, as a result of the US-China ‘truce’ agreed-to at the G20 meeting — saw trans-Pacific Ocean shippers moving their cargo early. This sent container shipping spot rates soaring to five-year highs, as eastbound October volume grew 12.2 percent and kept capacity under pressure.

Caught up in the wide net cast by the tariffs were electronics and other higher-value consumer products that are traditionally shipped by air, and after ignoring the trade war for months there was a 4.5 percent increase in China-US demand in October, with a 30.5 percent growth in volume in the specific high-tech segment of the air cargo business.

Air freight analyst WorldACD noted that this was more than the usual seasonal upswing and “more likely a case of US businesses stocking up before tariffs really start to bite.”

After air cargo growth in September slowed to its lowest level in more than two years, volume picked up in October with International Air Transport Association (IATA) data showing an increase of 3.1 percent year over year on growing international e-commerce and an upturn in the global investment cycle.

But it is not all positive, and IATA said demand in October was negatively impacted by a contraction in export order books in all major exporting nations, longer supplier delivery times in Asia and Europe, and weakened consumer confidence, compared with the high levels of early 2018.

“Cargo is a tough business, but we can be cautiously optimistic as we approach the end of 2018,” said Alexandre de Juniac, IATA director general and CEO.

“Slow but steady growth continues despite trade tensions. The growth of e-commerce is more than making up for sluggishness in more traditional markets, and yields are strengthening in the traditionally busy fourth quarter. We must be conscious of the economic headwinds, but the industry looks set to bring the year to a close on a positive note.”

Peak air cargo shipping season still has a couple of weeks to run, but there is not expected to be any severe capacity issues that created such severe bottlenecks in late 2017.

Sebastiaan Scholte, CEO of Jan De Rijk Logistics and chairman of the International Air Cargo Association (Tiaca), sounded an optimistic note for the year, saying that strong demand would make it a good peak season, despite the geopolitical trade risks.

“Last year the sudden surge in volumes in the second half caught many off guard,” he told JOC.com. “This time the market is better prepared, and capacity has been secured with additional charters and block space agreements. Therefore, we expect capacity to be more in-line with demand than last year.”

According to Freightos, when compared with last year, this air freight peak season has so far been a non-starter. “China-US general rates continued to ease following the Black Friday bottleneck, down 35 cents this week to $4.47,” the online freight marketplace noted.