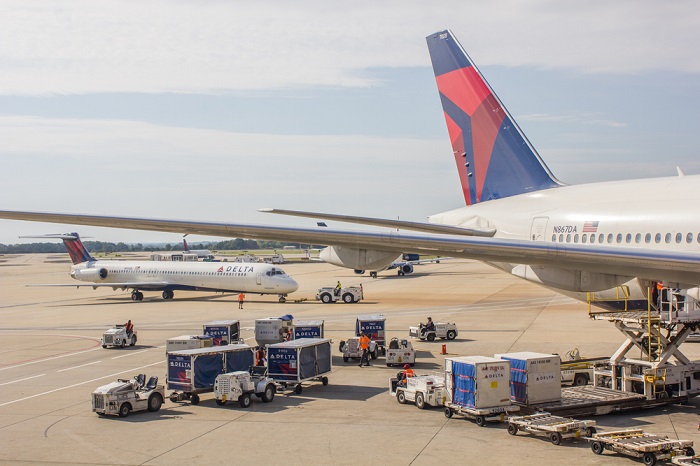 Congestion flare-ups at Hartsfield-Jackson Atlanta International (ATL) that are delaying air cargo shipments underscores the broader US challenge serving up higher transportations costs to shippers, in addition to pressures from steeper fuel prices and higher trucking rates. ATL says it has brought delays under control, but complaints persist.

The squeeze is the result of airport congestion caused by truck choked intra-airport roads, often long lines of truckers delayed in picking up and dropping off loads, poor dock-door management, scant or overcrowded air freight facilities, and understaffed ground handlers — all strained by a rising tide of domestic and international air cargo tonnage. North American air cargo volume was up 5.3 percent in the first six months of 2018 compared with the same period a year ago, according to the International Air Transport Association.

The delays all add up to wait time surcharges and in some cases storage expenses tacked on to already steep transportation bills that can disrupt logistics budgets. Strange as it may sound, it’s not uncommon for ‘detention’ charges to exceed the value of the goods being hauled, truckers and forwarders confide.

To ease the crunch, some of the busiest airports such as Seattle Tacoma, Los Angeles International, and John F. Kennedy International are channeling cash into new on-tarmac or airport-adjacent cargo warehouse facilities with more dock doors and easier access to them. At the world’s busiest passenger airport, which is also the 42nd busiest cargo airport, the city and the cargo community took some drastic actions a year ago.

Long lines of trucks waiting for cargo warehouse doors at ATL caused such a firestorm of complaints that city officials created a marshaling lot for truckers to wait until a dock door becomes available.

Termed the “truck pass lot” and said to be the first at any US airport, it has been successful in getting haulers off the intra-airport warehouse approach roads, ATL officials maintain.

But while trucking companies, freight forwarders, customs brokers, and airline cargo officials generally agree progress has been made, they privately and publicly lament that pickup and delivery delays are still a problem. In some extreme cases, drivers can be marooned in the truck pass lot for six hours or longer.

It’s not uncommon for export shipments to miss cutoff times and flights, while time-sensitive import cargoes can arrive at consignee receiving docks a day late, some transport providers report.

In a series of interviews, JOC.com has found anger and blame isn’t heaped solely on the airport leadership.

“The problem we have in Atlanta is not just the traffic but it’s with the main third-party airline cargo handlers, Alliance Global International and Swissport Cargo Services,” said Deborah Torma, president of Atlanta Customs Brokers and International Freight Forwarders. “The handlers don’t have enough personnel, and they don’t pay them enough to hustle.”

“Some of the ground handlers here work as hard as they can and some are only working to do as little as they can,” said a trucking company executive dispatching trucks in and out of the airport. Swissport, he claims, will try to hire people but by the time their clearances and approvals come through, they may wind up with a much smaller percentage of qualified hires.

“It’s frustrating for everyone,” he continued, adding that he heard just a few years ago “the third handlers were paid $10 an hour and that temps were paid $11 to $12 an hour.”

Roy Copening, general manager of Swissport’s Atlanta operation, doesn’t deny he has difficulties hiring handlers but said the roots of the congestion issue cannot be laid entirely at his front door.

“We are constantly trying to employ people,” insisted Jermaine Sanders, Atlanta general manager for Alliance Ground International, which handles cargo at Hartsfield-Jackson for Korean Air Lines, AirBridgeCargo, CargoLogicAir, Polar Air Cargo, and a half dozen other airlines. “But there’s a lengthy process for background checks by the Transportation Security Administration and Customs, ranging from four to six weeks. By the time the approval comes back, the employee has often found another job.”

Sanders, who previously worked at John F. Kennedy International Airport, said New York’s largest airport has a bigger cargo area for staging trucks, but that Atlanta’s new truck pass lot “has made it much easier and there is less backed-up truck traffic, but there’s still a problem.”

The airport concedes there’s been logjam for truckers in the past but maintains it has been resolved. “This is a passenger airport, and cargo is usually considered the distant cousin so we’ve had to retrofit the infrastructure,” said Elliott Paige, director of air service development for Hartsfield-Jackson. “What the truckers talk about is that three to four years ago they could get stuck in traffic unable to pick up their cargo. There used to be fist fights for [access to] dock doors.”

He said the new truck pass lot, which holds 50 to 60 trucks, is more organized, coordinated, and even semi-automated. To get in, a driver has to present credentials, paperwork spelling out what’s being picked up or dropped off; the lot operator, using a software program, automatically assigns the driver a dock door.

“Some truckers don’t even wait,” Paige said. “They get their credentials. Sometimes, they may have to wait five to 10 minutes to an hour and sometimes longer.” One challenge he admits: the longer it takes ground handlers to unload one truck, the longer the trucker waits for a specific dock door.

Paige confirms the job market for cargo ground handlers is “tight” — as it is for all airport employees — and that the airport is working with community organizations and “stakeholders” to find a solution.

Not all airlines affected have their pickup and delivery trucks assigned to the pass lot. One trucker who’s been calling at Hartsfield-Jackson for 25 years said, “This is the worst I’ve ever seen it.”

He said United Airlines and American Airlines warehouses are in the north cargo area, Delta and Lufthansa have their own cargo centers, and truckers serving all the other airline cargo warehouses have to line up at the truck pass lot first.

Even with the new marshaling lot, the trucker said Atlanta’s popularity as a gateway for importers and exporters to Europe, the Midwest, and South America has been exploding in recent years, reflecting the growth of the regional economy.

“There’s just so many more airlines, and Atlanta doesn’t have the motivated manpower and the facilities — there are not enough docks to accommodate the volume on a timely basis. So forwarders are having to add more detention money to their quotes or bills for wait times and delays that can still eat up two to four to five hours. Not much we can do about it,” he said.

Lori Solomon, regional manager for Philadelphia Truck Lines and a vice president for the Atlanta Air Cargo Association, was willing to speak on the record and in hard dollar specifics, “It’s terrible. We’re in the busiest time of the year for shippers, particularly with e-commerce. You arrive at the truck pass lot at 1586 Sullivan Road, and you’re assigned to pick up or unload at, say, dock door 12. If it’s in the morning, you may wait 30 minutes or sometimes you may wait six or seven hours. Then you’re cleared to go to truck door 12 and another truck is backed in and you’re stuck. And you may miss the cutoff.”

But Solomon said that’s where the financial pain comes in for her customer — the forwarder and, ultimately, the shipper. “We have to charge our customer $75 an hour wait time. Add up the hours and sometimes that’s more than the value of the shipment. And that’s not counting the pickup and delivery costs.”

“I may have three trucks and three drivers parked in 100-degree weather, idling, wasting fuel, assets tied up, and the drivers, who can only drive 11 hours a shift — their time monitored by an ELD [electronic logging device] — are just sitting there.”

Solomon, like other truckers interviewed, said a lot of common carriers will not pick up and drop off at Hartsfield-Jackson. She, too, blames the ground handlers. “I know for a fact they’re trying, but they’re not trying hard enough. They’re not fixing the problem.”

Ironically, she is not pinning it on Copening. “Roy is an awesome guy. It’s not a one-man solution, He gets down and works on the dock doors.”

Some Atlanta freight forwarders feel just as handcuffed as the truckers by the congestion, even with the pass lot opening. “My hands are tied,” said Scott Sheckels, regional manager for Express Air Freight International at ATL, which handles a lot of import shipments, “The price of trucking has gone up sharply, which I have to explain to my agents overseas. So I tell them the pickup costs $125, but if the truck sits at the airport, they have to tell the consignee it’s going to cost maybe $275. And on export shipments, if a truck waits six hours [in the lot], they’re subject to missing the flight.”

Sheckels said the real bite comes when the forwarder can’t recover the inbound shipment the same day because of the truck congestion and delays. “The airline charges the forwarder storage and that can be substantial. What I’ve actually done if I think there’s going to be a delay, I book delivery of the [inbound] cargo for the next day.” He concedes it costs his clients that extra day, but at least he doesn’t guarantee it and disappoint them.

The forwarder said he’s personally experienced the frustration of shipping a package at ATL albiet on a smaller scale. “I’ve gone to Delta, who should own Atlanta, with a three-pound box, booked air express, and I still had to wait two hours to tender it at the desk.”

Airline managers stationed at ATL are reluctant to get involved in the debate over trucking delays. One official with a Middle Eastern airline confirms cutoffs are “occasionally missed, but this is a very busy airport because all airlines want to be in Atlanta. I do know they are still trying to solve the issues. They have meetings.”

Indeed, Hartsfield-Jackson officials and other airport stakeholders — handlers, forwarders, truckers, and customs brokers — have been attending a monthly truck pass lot meeting for the last six months, but what is discussed is not published.

One large international forwarder isn’t griping or waiting for any magical solution. “Freight forwarders complaining about wait times or handlers or airlines should be proactive,” insists Tom Roth, Atlanta warehouse manager for Kuehne + Nagel (K+N), one of the biggest importers and exporters at Hartsfield-Jackson. Since K+N’s freight moves on all airlines and the warehouse is open 24/7, he works closely with Swissport and Alliance on scheduling and keeps in close contact with drivers, airlines, and what he calls “the marshaling yard.”

“It’s not easy. We still have delays,” Roth said. “But you have to reach out. You just can’t [place] blame.”