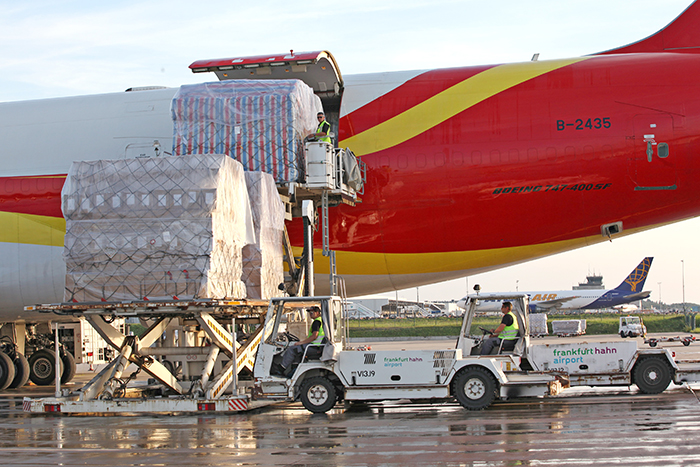 Air cargo freight rates on the east-west trades are being driven up to record levels as strong peak season demand uses up all available capacity, adding pricing pain to shippers already struggling to manage delays out of China.

Rate management platform Freightos has reported that Europe carriers hit their cargo capacity last week for the first time in 10 years, and this pushed spot rates on the trans-Atlantic up to an incredible $13 per kilogram.

Manel Galindo, CEO of Freightos WebCargo, said unlike ocean freight that was in its slow season, air freight was at peak capacity. “For as far back as I can remember, all carriers maxed out on capacity in Europe,” he said.

“This triggered holiday season auctions, with bookings bumped by the highest bidder. In one extraordinary case, I saw spot rates on a trans-Atlantic route hit $13 per kilogram. Prices have stabilized, but this frenzy may happen again in the run up to Christmas.”

Drewry’s East-West Airfreight Price Index gained another 20 cents in October to reach a year-high $2.89 per kilogram, and the analyst believes it has exceeded that level again in November. On particular trade lanes, its data show that the air freight rate — that includes base rate, fuel surcharge, and security surcharge — from Hong Kong to Chicago hit a monthly average of $4.20 per kilogram in October, and $3.50 per kilogram from Shanghai to Frankfurt.

Drewry director, supply chain advisors, Philip Damas also highlighted the manic performance of air cargo. “The market has been in something of a frenzy this peak season, with a combination of factors leading to the lack of available capacity,” he said.

“Low demand in the past has led to many combination airlines moving towards slimmed down, main deck fleets, to relieve operational costs. Relief and humanitarian flights, following hurricanes and other events, have also taken some freighter capacity off the market, with additional large passenger aircraft, such as the A380 coming in, the belly size has reduced in recent years.”

Delays of two to three weeks are being reported at some of China’s airports as all available belly cargo and freighters are stuffed by shippers trying to get their products on shelves in time for Christmas. Shanghai's largest cargo handler Pactl reported a 12.5 percent growth in cargo throughput from January through November of 1.7 million tonnes, while Hong Kong's volume up to the end of October increased 10 percent year over year to 4 million tonnes.

But the most significant capacity grabber has been e-commerce, Damas said. He gave Alibaba’s Singles' Day in China on November 11 as an example, where the company saw $25 billion in revenues, and the US Thanksgiving holiday that also led to tighter capacity and congestion on some trade lanes in late November.

The steady rise in e-commerce was behind a confident forecast by the International Air Transport Association (IATA), which believes sustained demand for air cargo will continue. It has forecast global industry net profit will rise to $38.4 billion in 2018, an improvement on the $34.5 billion carriers will net in 2017.

“The boost to cargo volume in 2017 was a result of companies needing to restock inventories quickly to meet unexpectedly strong demand,” IATA noted. “This led cargo volume to grow at twice the pace of the expansion in world trade [4.3 percent]. Cargo yields are expected to improve by 4 percent in 2018, down from the 5 percent in 2017.”

Although restocking cycles are usually short-lived, IATA said the growth of e-commerce would support continued momentum in the cargo business beyond the rate of expansion of world trade in 2018, and the association predicted cargo revenue to top $59.2 billion in 2018, 8.6 percent above that achieved this year.

The rising rates are improving yield for the carriers, and global revenue in October was up 20.5 percent year over year, according to air cargo analyst WorldACD. The analyst said the strong showing for carriers was driven in particular by an impressive yield growth from Europe, the Middle East, and South Asia, in particular from India, high volume growth from Europe — both to and from North America — and to Central and South America; and higher fuel cost factored into the revenues.

Freightos said after Christmas rates would traditionally ease off before picking up again for the Chinese New Year. But with e-commerce growth fueling strong demand, the company expected prices to flatline in January instead.