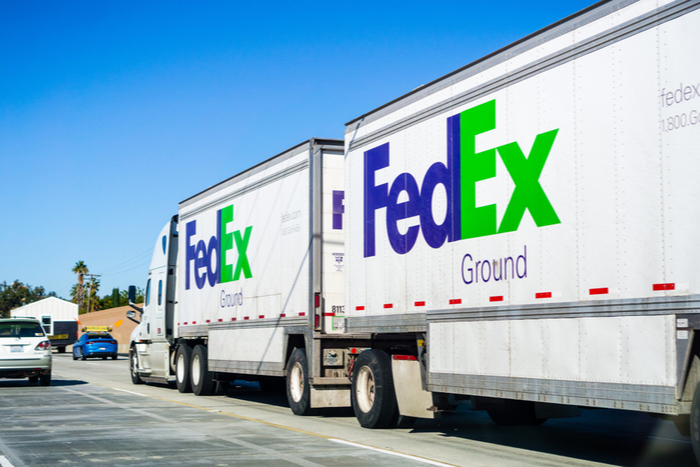 The runway is shifting beneath FedEx Corp.’s wings, as decline in global trade and growth in residential e-commerce are colliding with far-reaching changes wrought by Amazon’s decision to expand its own fulfillment network. Amazon last Sunday told third-party vendors not to use FedEx Ground for Prime shipments, just weeks before the Christmas holiday.

FedEx will begin “lapping Amazon” in 2021, Alan Graf, chief financial officer at the Memphis-based company said during a conference call with Wall Street analysts Tuesday. “We will have a lot more of the sixth- and seventh-day [business] under our belt and we're going to be delivering millions of packages on Sunday for the rest of this fiscal year rolling into [fiscal] 2021,” Graf said.

Amazon, however, is quickly changing the landscape, said Satish Jindel, president of transportation research firm SJ Consulting Group. “By 2022, Amazon Logistics — not the retailer but the logistics operation — is going to be delivering 4 billion packages, compared to 3.6 billion for FedEx. They will overtake FedEx in total packages they deliver,” Jindel said.

In its third-quarter earnings call, Amazon projected a nearly $1.5 billion year-over-year increase in fourth-quarter shipping costs, including transportation costs as well as the costs of added capacity and warehouse expansion. “There’s a lot of tangential costs,” CFO Brian Olsavsky said. “By far the biggest expense is the actual transportation cost.”

Jindel noted that Amazon has ordered 100,000 electric vans that will be used by its network of delivery providers, in addition to about 30,000 delivery vans on the street today. Those vans are expected to enter service between 2021 and 2024. “That’s a lot of capacity,” said Jindel. “In five years, Amazon is probably going to deliver more packages than even UPS.”

That will reshape the express package market shippers have become accustomed to since the 1980s, one dominated by UPS and FedEx. The two transportation companies are working fast to adjust to market changes unfolding at an unprecedented pace, fueled by changes in customer demand that Amazon has enabled, particularly through Amazon Prime.

FedEx terminated its ground package contract with Amazon in August, two months after dropping its contract to fly Amazon packages in the United States. The loss of volume had a negative impact on the quarter that ended Nov. 30, FedEx said, as did the late US Thanksgiving holiday, which shortened the holiday shopping and shipping season by a week.

That meant Cyber Monday fell on Dec. 2, rather than in November. FedEx moved 37.8 million packages on Cyber Monday, a record and a 17 percent increase over the same online sales day last year. FedEx revenues and profit margins would have been stronger if that Cyber Monday and Cyber Week volume were in the third quarter, company executives pointed out.

Total quarterly revenue dropped 2.8 percent year over year to $17.3 billion, while net profit plunged 40 percent to $560 million. Most of the lost revenue fell from FedEx Express, which saw revenue drop 5.4 percent to $9.1 billion, with operating profits down 62.5 percent year over year. FedEx Ground revenue rose 3.4 percent from a year ago to $5.3 billion.

Volumes were flat to down at FedEx Freight, the largest US trucking company and less-than-truckload (LTL) carrier, depressing revenue by 3.9 percent to $1.8 billion, while the carrier’s operating profit declined from $148 million to $141 million. The slump in US manufacturing and industrial shipping contributed to the LTL revenue decline.

FedEx is moving to a permanent seven-day delivery schedule at FedEx Ground starting Jan. 1, a step rival UPS will follow, with help from the US Postal Service. In the Amazon era, consumers have ordained that there shall be no day of rest for delivery workers. That means higher operating costs for the largest US delivery firms, if not higher prices for consumers.

FedEx announced steep cuts in its air network to better match capacity to demand. By the fourth quarter of FedEx’s current fiscal year, which ends next May, international and domestic flight hours should be cut by 8 percent, Raj Subramaniam, president and chief operating officer, said during the earnings call Tuesday.

Those cuts include 14 aircraft by the end of fiscal year (FY) 2020 next May 31, including the “permanent retirement” of FedEx Express’ fleet of 10 A310s. Subramaniam said FedEx would retire another 29 aircraft in total over the next 30 months. “Capacity reductions will bring greater focus on revenue quality as we generate more compensatory volume through the network,” he said.

Tighter spending limits will extend across FedEx, founder, chairman, and CEO Frederick J. Smith said. “Our hopes for a restoration in trade growth, expressed last June, have simply not materialized,” he said on the call, transcribed by Seeking Alpha. “Due to the trade dispute, we are deferring capital” spending, he said, if it is not essential for safety or replacement.

“We’re not going to grow our [air cargo] fleet, we’re just replacing it, we’re tightening it,” said Graf. “We’re going to tighten it up and reduce flight hours. Express’s domestic margins are fine. So, it's the international that we’ve got to keep working on.”

Beyond the competitive pressures of the peak season, weak international trade, and changing e-commerce terrain, FedEx faces a split in its US market between commercial business-to-business shipments and home deliveries. Commercial traffic makes up a significant portion of FedEx Ground’s volume, but e-commerce is its fastest growing business.

“Due to the slowdown in industrial production and other macroeconomic factors, commercial traffic has not been what we expected,” Subramaniam said. “Our B2B business provides greater density and stronger yields than B2C, and so, we are renewing our focus on commercial traffic.” At the same time, “we are working to position FedEx Ground as the B2C player,” he said.

UPS, the USPS, and Amazon all want that B2C mantle as well, and Amazon has been working hard to wrest it from traditional package delivery operators. The online retailer now boasts planes, trucks, and trailers in what amounts to a massive private fleet as well as its own network of third-party delivery agents. Amazon is resetting its delivery model to one-day shipping.

Add same-day shipping demand, and seven-day delivery, to that and the shift in the ground beneath the ground package business and the air cargo and trucking businesses that support it is evident. “We weren't even delivering packages on the weekend a couple of years ago,” Smith pointed out. Last weekend, FedEx delivered more than 14 million packages.

A shift of many online orders and packages from late November to early December, thanks to a late Thanksgiving, is flooding delivery networks, according to ShipMatrix, a sister company of SJ Consulting Group that tracks parcel shipment data. ShipMatrix data shows an increase in parcels delivered on Saturdays and Sundays, with on-time deliveries in the 90-percentile range.

FedEx’s plans to rein in flight hours and its air fleet are a good step, Jindel said, as is the adoption of a seven-day week for ground deliveries. “They are doing the right thing to have a seven-day delivery network, because businesses work Monday through Friday, but people live in their homes seven days a week,” he said. FedEx threw the seven-day switch Nov. 3.

But Jindel believes the company needs to do more to position itself to compete in the transportation market of the 2020s. “While some analysts think the problems at FedEx Express are cyclical issues, I don’t believe so,” he said. “They’re structural. The market for express is declining or flat and doesn’t require as many aircraft, at least in the domestic operation.”

A swing in the economic cycle won’t mean more people will ship domestic parcels by air, he said. The trend, as he sees it, is for more shipments moving through faster, more localized networks on the ground.