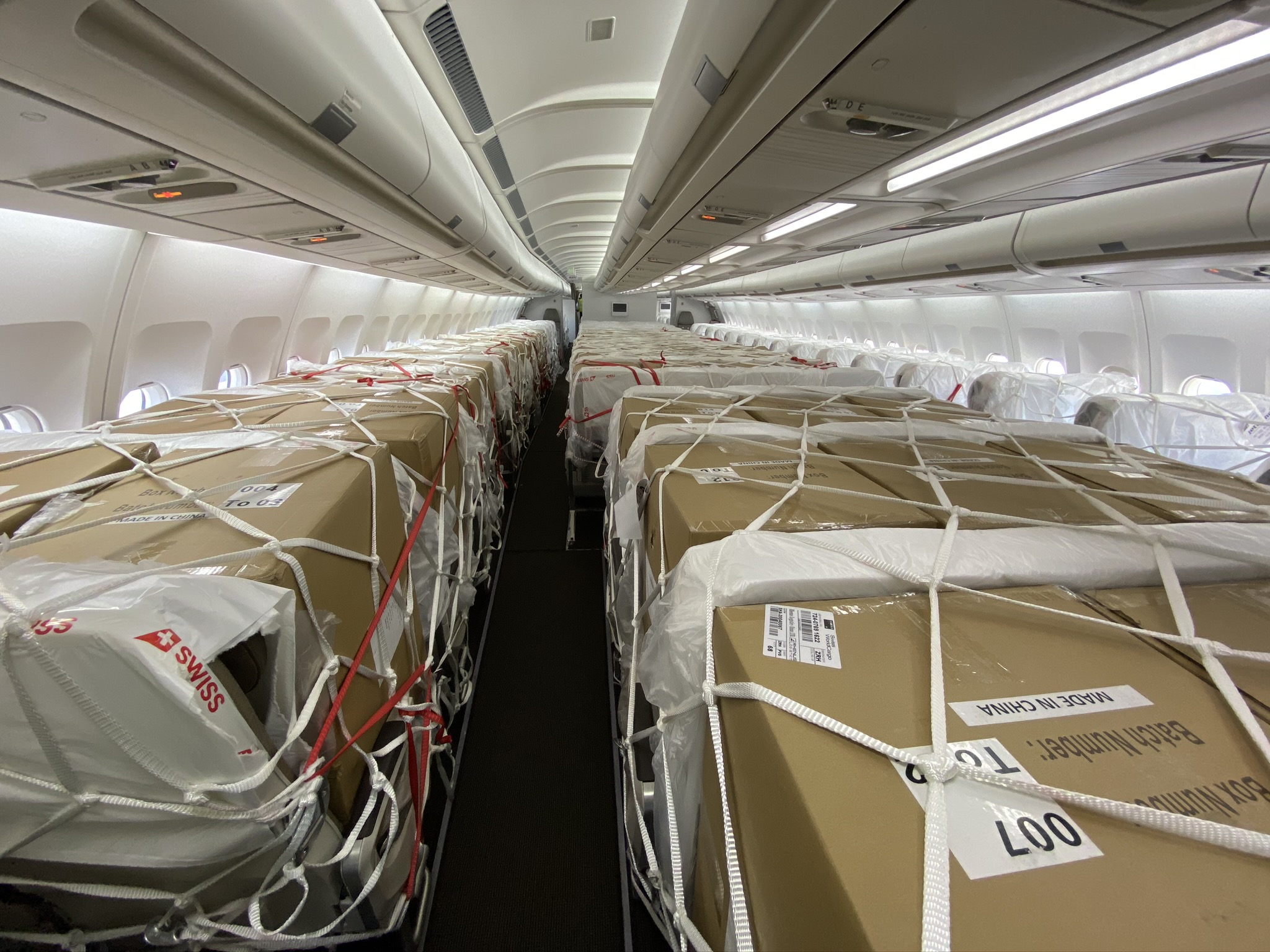 The passenger deck of a Swiss Airbus 340 passenger plane is loaded with protective medical supplies for a flight from China to Switzerland. Photo credit: Swiss WorldCargo.

The rush to fly urgently needed medical equipment and pharmaceuticals from China to Europe amid the fight against the coronavirus disease 2019 (COVID-19) has pushed rates on the route to record levels, according to the latest data from Freight Investor Services (FIS).

The price per kilogram rose almost 36 percent in the past week to $6.22/kg, which FIS noted was largely the result of air cargo rates from Shanghai to Europe soaring 42 percent to a never-before-seen $7.33 per kg.

Rates are being driven up because of heavy demand for medical protective equipment that is in short supply at hospitals across Europe as the coronavirus outbreak intensifies, while capacity is limited by the suspension of passenger flights to and from China. The travel bans introduced in February removed 60 percent of air cargo capacity from the global market, and Accenture estimates that only 20 percent of the world’s passenger planes are still flying.

The rising rates were no surprise to Stan Wraight, president and CEO of Strategic Aviation Solutions International. Wraight said although 99 percent of the world’s goods were shipped by sea, “when we get into an emergency like now, that 1 percent that is air freight becomes ever more valuable.”

Alan Hedge, principal at aviation consultancy Hedge & Associates, said sensitive medical cargo will dominate air transport for a while as consumer demand in most of the world plummets. Because of this, Hedge said shippers were not likely to see much of an improvement in prices of in-demand products for at least another six weeks, although he added, “I don’t think peak rates of up to $10/kg are going to be common.”

With no passengers to carry, some airlines have deployed their empty planes to carry cargo, especially on routes out of China that supplies most of the world’s medical equipment.

In April, Swiss WorldCargo will operate 10 Airbus 340 passenger flights from China to Switzerland to ship a total of 200 tons of personal protection equipment for health workers, including protective suits, medical gloves, safety goggles, and breathing masks. The first flight arrived in Zurich from Shanghai on Sunday.

Other airlines are using passenger planes in the same manner, loading cargo on the main decks and stacking boxes across empty seats. Among the carriers are Etihad Airlines, Lufthansa, British Airways, Air France-KLM, Cathay Pacific, and Air Canada.

“Medical goods are top of this list, but so are mechanical items that keep our lights on, our water pure, and our sewers sewing,” said Tim Strauss, vice president of cargo at Air Canada. “There is support equipment used by emergency service providers and police forces that isn’t sourced locally.”

GEODIS has chartered two heavy-lift Antonov 124 aircraft that will operate in rotation between France and China for the next few months. The Paris-based forwarder said in a statement it has planned 16 flights with the aircraft that over the next few weeks will transport 1 billion masks from China to France.

Brian Bourke, chief growth officer at SEKO Logistics, said demand for air cargo was being dominated by medical supplies and equipment, but he also pointed out that demand still remained for consumer goods and perishables, as well as automotive, high-tech, and aerospace products where some factories were still running.

“This is because some countries will experience their COVID-19 case ‘peak’ at different times,” he said.