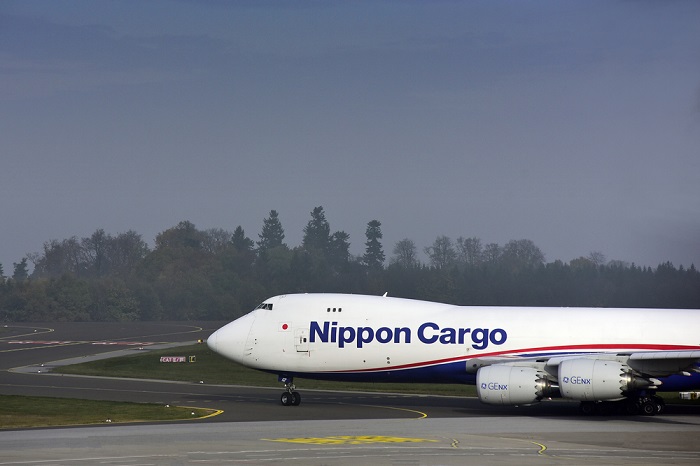 The decision by Nippon Cargo Airlines to resume flights between Tokyo and Chicago on Friday, Sept. 28, will add urgently needed capacity to the space-constrained trans-Pacific routes just ahead of the peak season. Photo credit: Shutterstock.com.

The decision by NCA to resume flights between Tokyo and Chicago on Friday, Sept. 28, will add urgently needed capacity to the space-constrained trans-Pacific routes just ahead of the peak season. The air cargo market has been particularly tight this year since NCA took all 11 of its Boeing 747-8 freighter fleet out of service in June after Japan’s Civil Aviation Bureau found inconsistencies in the carrier’s maintenance records.

The bureau launched an audit of the airline when it found multiple incidents involving its aircraft had not been reported or recorded. NCA subsequently decided to ground the 11 planes, removing a significant amount of capacity from the trans-Pacific at a time when it was urgently needed and pushing up rates.

Online rate marketplace Freightos data show China-US air rates in mid-September were $3.20 to $6.00 per kilogram ($1.45 to $2.72 per pound) for general cargo. Based on current activity, Freightos is expecting robust peak-season rates.

Trans-Pacific shippers will welcome the space

With the resumption of its Tokyo-Chicago route, the space NCA is adding to the trans-Pacific trade will be welcomed by shippers forced into the air because of an early increase in demand for ocean freight ahead of the US trade tariffs.

C.H. Robinson noted that tight space was pushing load factors up into the middle- to high-90 percent range, in some cases. “Ocean vessels are overbooked so shippers are coming to us to convert required shipments to air,” the forwarder said, with China’s e-commerce boom adding extra air volume to the amount of freight that typically moves this time of the year.

Ocean spot rates in the eastbound Pacific have begun to fall from the August highs when uncertainty surrounding Trump administration tariffs drove efforts by importers to get goods in before the latest round of tariffs kicked in. Responding to high bunker prices and tariff concerns, container lines — individually and with their vessel-sharing alliance partners — cut capacity in June, with 6 percent removed from routes to the West Coast and 1.3 percent to the East Coast.

Shippers are anxious to avoid a repeat of the 2017 peak-season capacity crunch, which saw cargo facing lengthy delays getting out of China and through Asia’s freight hub airports. The rising volume continued well into 2018 and beyond the Chinese New Year peak. Reports of cargo stuck on the tarmac in China for weeks and shippers paying up to $12 per kilogram saw shippers racing to lock-in air cargo capacity early.

But as with container shipping, there are signs of slowing volume in the air cargo trade. The International Air Transport Association said air freight measured in freight tonne kilometers recorded its slowest growth in more than two years in July at just 2.8 percent.

“This largely reflects the fact that the inventory restocking cycle, which helped air freight growth to outperform that of wider global trade in 2016/17, has now run its course. More generally, against a backdrop of rising trade protectionism measures, wider momentum in world trade also looks to be weakening,” IATA said in a statement.