Brussels at standstill after terror attacks

Brussels at standstill after terror attacks 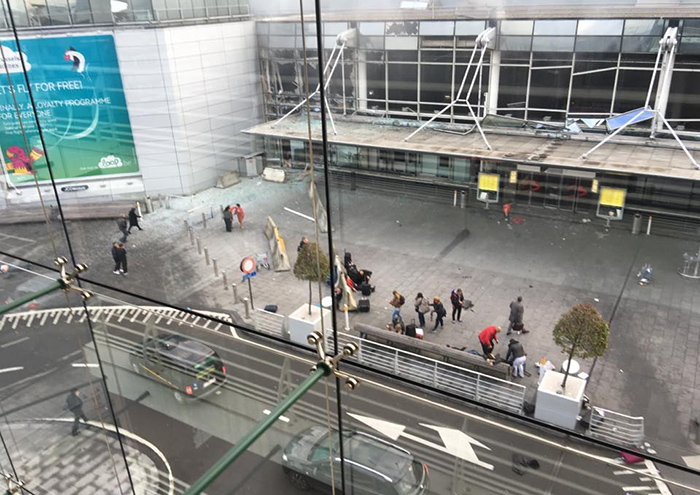 The aftermath of one of the explosions at the Brussels airport. Credit: Jef Versele

The movement of people and goods in and around Brussels ground to a halt Tuesday after a series of terror attacks rocked the Belgian capital. Brussels Airport has been shut down, all flights in and out cancelled, and public transportation throughout the city has been put on lockdown, sparking wide reports of gridlock.

Three explosions were reported Tuesday morning — two at the airport and one other at a metro station in the city center, according to the Associated Press. A third bomb at the airport was deactivated later in the day.

Local media has reported that at least 30 people are now dead and another 130 injured after the catastrophic events. The Islamic State has claimed responsibility in the wake of the attacks, issuing a statement via its own personal news agency.

All flights into and out of the Brussels Airport, both passenger and freight, have been cancelled. Aircraft, including freighters, have been diverted from Europe’s 10th-largest cargo hub, to other Belgian and European airports.

Brussels Airport, considered the “second logistics center in Belgium after the Port of Antwerp,” handled just more than 489,000 metric tons of cargo in 2015, up 7.8 percent year-over-year. That growth was propelled by the arrival of four new cargo carriers in the full freighter segment and the development of express services at the Belgian hub.

Airport officials had announced earlier this month that Ethiopian Airlines Cargo would be resuming operations in Brussels after moving its cargo operations to Maastricht Aachen Airport in the Netherlands back in November. The service was originally set to return to Brussels Airport this Saturday, but whether that remains the case now is unknown.

Despite some hiccups, the terror attacks have had little impact on the nation’s rail freight network, said Veerle Van Mierlo, spokesperson for B Logistics, the logistics division of Belgium’s national railway company.

“At this moment, there are some delays, but impact for rail freight is limited,” Van Mierlo told JOC.com. “On a national level trains can be operated normally.”

The country’s capital, essentially on lockdown, remains a chokepoint though, Van Mierlo said.

“They (freight trains) cannot pass the environment around Brussels,” she said.

The Port of Antwerp, Europe’s second-largest seaport and about an hour’s drive north of the Brussels Airport, remained in operation Tuesday.

According to Dirkx, while the country’s terror alert may be at its highest level, the port remains at level 1. Dirkx explained that the Port of Antwerp’s security protocol is based on the International Ship and Port Facility Security Code.

“Our port security level that is based on international ISPS-code is still at level 1, which means that we are vigilant, but keep on working,” said Dirkx. “Port workers are asked to pay extra attention.”

The Port of Zeebrugge is also operating normally, but under heightened security.

The attacks have not only raised terror alerts and security protocol in Belgium, but across Europe. Authorities in Frankfurt, London, Paris and Holland have all said that their airports would be boosting security in response to the Brussels bombings.

In the U.S., the White House has said officials remain in close contact with their Belgian counterparts.