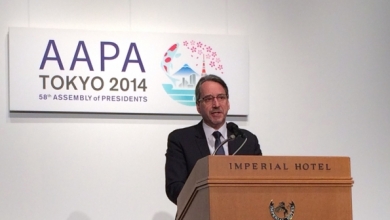 HONG KONG — The international air freight demand of Asia-Pacific airlines, measured in freight ton kilometres (FTK), grew by a firm 6.4 percent in October, on the back of buoyant demand for electronic goods from manufacturing hubs in North Asia.

"While the longer term demand outlook is positive, Asian airlines continue to grapple with numerous challenges, including persistent yield pressures arising from intense market competition and signs of overcapacity, which has led to tight profit margins,” Herdman said.

“With fuel being the single largest cost item for airlines, the recent decline in oil prices, if sustained, has been perceived as a welcome reprieve. However, in a highly competitive market, the impact on the bottom-line will depend on individual carriers' fuel hedging policies.”

The drive to improve yields and sustain that profitability is consuming much of the effort of airlines in Asia, and carriers such as Cathay Pacific are hedging significant amounts of their fuel on the lower oil price.

“Cathay Pacific has over 50 percent of its fuel hedged at levels above the prevailing spot price, the net benefit from lower fuel expense, taking into account the reduced fuel surcharges as well, should drive earnings higher next year, with plus or minus 10 percent for every $5 per barrel change,” according to a note from Citi Research.

“Based upon our revised model, this decline in effective fuel prices will reduce total 2015 fuel expense for CX (Cathay Pacific) by 3 percent, offset somewhat by increased flight frequencies and capacity additions. The hedges also reduce the earnings volatility around fuel expense.”

Herdman said overall, Asian carriers remained positive on the outlook for further growth, but were carefully controlling costs in a bid to restore profitability to more sustainable levels.

Cathay Pacific (the world’s largest cargo airline), reported October cargo traffic up 18.7 percent year-over-year, the eighth straight month of reporting volumes over 16 percent, with a continued surge in demand out of Hong Kong and mainland China. The airline is expanding its intra-Asia freighter routes and those to North America.

BB&T Capital Markets said air freight for early December to the U.S. was tight, a situation that should benefit the integrators. The analysts said in a note to customers that one source said DHL was “snapping up capacity” for December, while another indicated that FedEx had leased two 747-freighters from Atlas Air and two more from Kalitta.

Atlas Air said recently that West Coast port congestion had shifted some freight from ocean to air and that fourth quarter yields were up on strong trans-Pacific growth.