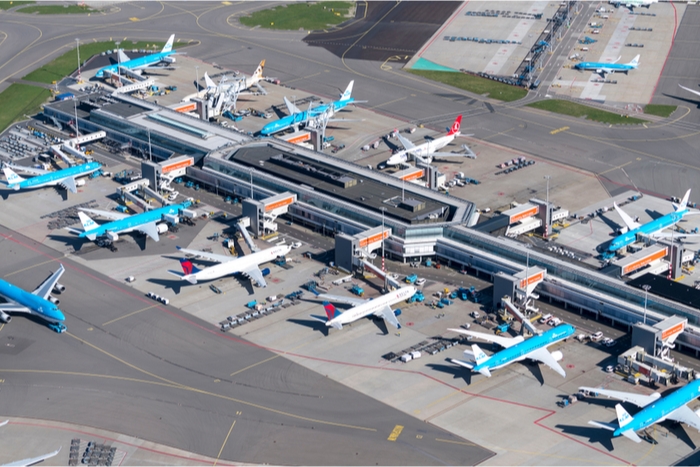 The space constraints generated by a US travel ban on passengers from most of Europe is ramping up air cargo freight rates on the trans-Atlantic. Photo credit: Shutterstock.com.

Air cargo rates are soaring to record levels ahead of the withdrawal from midnight Friday of almost 60 percent of the belly cargo capacity available on the trans-Atlantic routes, with airlines no longer honoring contracts and moving to the spot market.

The US ban on airline passengers traveling from the Schengen Area — a zone encompassing 26 of Europe’s largest economies — does not include the UK. Angus Hind, air and sea director of forwarder Europa Air & Sea, said he was starting to see huge demand in the UK from cargo now being routed from the continent.

“All airlines are therefore spot rating all shipments and not honoring contract rates as capacity is severely limited,” he told JOC.com.

The air cargo space constraints and huge demand has sent rates soaring. According to a Germany-based forwarder who did not want to be identified, the rate charged Friday for a heavy shipment from Europe via the UK was $27.60 per kilogram — “the highest rate I have seen.”

Apart from this bulk shipment, he said rates at major airlines in Europe and the UK were more in the $11 to $17 per kg range at the moment, still substantially higher than the $1.50-$3.00/kg rate typically seen at this time of year.

Brian Bourke, chief growth officer with Seko Logistics, predicted after the ban was announced Wednesday that the dominance of passenger traffic on the trade would have a dramatic effect on the market. “We do expect market rates to significantly increase in the immediate future,” he said late Thursday.

Peter Stallion, an analyst at Freight Investor Services, said the rising air cargo prices on the trans-Atlantic would continue with “the majority of trans-Atlantic air freight capacity cut off over the next 30 days.”

The extent of belly capacity loss

According to an analysis of March 2019 airline schedules by consultant Alan Hedge, 58 percent of the Europe-US below deck cargo could potentially be lost by the canceling of all civilian passenger flights between the United States and countries covered by the ban.

While Hedge said carriers were unlikely to cancel 100 percent of those services, the impact on the air cargo community was still going to be enormous.

“The fraction of belly service being canceled just by the Lufthansa Group [from Saturday] is shockingly large, at 86 percent of the group’s scheduled belly capacity between the US and Austria, Belgium, Germany, and Switzerland combined will disappear literally overnight from the US-Europe market,” he told JOC.com.

“To the extent the US carriers have a greater market share of US citizen passenger traffic, I would expect them to cancel a lower, but still substantial, fraction of passenger flights to the countries under the ban,” Hedge added.

The US government policy bars non-US citizens from the 26 countries in the European Union’s Schengen Area, or those who have visited those countries in the previous two weeks, from entering the US. The countries include Austria, Belgium, Czech Republic, Denmark, Estonia, Finland, France, Germany, Greece, Hungary, Iceland, Italy, Latvia, Liechtenstein, Lithuania, Luxembourg, Malta, Netherlands, Norway, Poland, Portugal, Slovakia, Slovenia, Spain, Sweden, and Switzerland.

Steven Polmans, chairman of The International Air Cargo Association (TIACA), said if sufficient full freighter capacity could be deployed by the airlines, it will be easier to find cargo solutions in the coming days. On March 5, IATA estimated the coronavirus crisis could wipe out $113 billion of revenue, although the scenario did not include such severe measures as the US and other governments have since put in place.

“It is not that there will be no longer any capacity between Europe and North America, so each airline will have to see if — and how much — cargo might be blocked and work with their customers to see what can be done,” Polmans said.

However, as the coronavirus spreads through Europe, the UK, and the US — health authorities say the virus will peak over the next two months — consumer demand is expected to fall as schools close and people self-isolate. This will have a strong impact on air freight volume, believes Paul Tsui Hon-yan, managing director of Hong Kong-based logistics company Janel Group.

“Demand for consumer goods, except essential items, in Europe and North America will substantially decrease due to the global coronavirus outbreak,” he told JOC.com. “Therefore, very soon — in the next two or three weeks — demand for air freight will fall.”

Capacity will not just be limited on the trans-Atlantic, Hedge said. European carriers will have to rely on their US alliance partners to carry whatever belly freight is able to be moved via those partners’ major US gateways, but the available space would shrink along with the type of aircraft deployed on domestic US routes.

“Markets formerly enjoying belly cargo service operated by non-US carriers in widebody equipment will now face predominantly narrowbody connections beyond the remaining US passenger gateways, and possibly no air connections at all to some points beyond the European gateway,” he told JOC.com.

“This will mean that air freight to and from points without direct freighter services will now require extensive trucking,” Hedge added. “This will especially affect the US West Coast if the only trans-Atlantic widebody belly services that remain are at major US hubs such as Chicago O’Hare, Dallas-Ft. Worth, Atlanta, and Newark Liberty.”

There are also concerns over transshipment. Flights from all over the world transit European hub airports such as Frankfurt, Amsterdam, Paris, Madrid, Brussels, and Zurich en route to the US.

Bourke said Europe was a gateway to the Middle East and Africa, and global connections have already been severely limited because of the reduction in passenger aircraft. “This is going to create an enormous amount of friction at a time when global freight is needed more than ever,” he said.

Last year, there were a total of about 200,000 scheduled flights between the US and the Schengen Area, the equivalent of about 550 flights per day, according to data from the International Air Transport Association (IATA). The travel ban will also affect flights from other countries that transit via the European hubs, limiting capacity for air cargo transshipment.