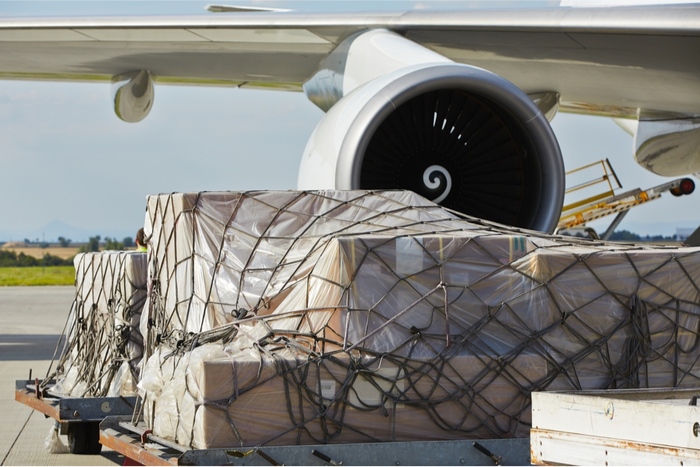 Slack demand and the ongoing US-China trade war is behind an 11.5 percent drop in spot market freight rates in the past six weeks from China/Hong Kong to the US. Photo credit: Shutterstock.com.

The only positive in an increasingly gloomy air cargo outlook this year is that the price of jet fuel, which can comprise one-third of airline operating costs, has fallen almost 6 percent in the past month and is down more than 10 percent year over year.

The bad news is that the price of oil and its distillates is falling because of concerns over slowing global growth, which means cargo volumes are declining along with fuel prices. This caused global airline share prices to fall sharply in May, which the International Air Transport Association (IATA) said was an indication that forward-looking equity investors were expecting tougher financial conditions ahead.

IATA said Brent crude oil and jet fuel prices lost their strong upward momentum at the end of May, driven by worries over slowing global oil demand reinforced by any escalation in the China-US trade war. According to S&P Global Platts, the jet fuel price on June 24 was $78.97 per barrel, up from $76 per barrel in May, but down from $88 a year ago.

Fuel prices are important to shippers as they determine the size of the surcharges levied by the carriers. Air cargo airlines manage the fluctuating price of their fuel by adding a sliding fee to the base rate that adapts to changes in the price, either up or down. A push by shipper organizations to get carriers to charge all-in rates that include the fuel segment has not taken off, mainly because a fixed rate means airlines also need to carry all the risk.

While the fuel price is trending downwards, so, too, are air cargo rates on the major east-west trades. Freight Investor Services (FIS) said on the trans-Pacific, slack demand and the ongoing US-China trade war is behind an 11.5 percent drop in spot market freight rates from China/Hong Kong to the US in the past six weeks. Year over year, the rate is down 3 percent.

While FIS noted in its weekly update that both basket lanes from China to Europe and the US rebounded slightly, climbing by $0.02 and $0.08, respectively, the analyst said it was a result of short-term e-commerce demand from several major high-tech manufacturers.

The downturn on the China-Europe trade was softened slightly by a delayed Brexit. FIS said spot rates have fallen 3 percent in the last six weeks but are up 12 percent year over year, with demand remaining unpredictable.

“Airlines are attempting to align capacity with demand … the market is now firmly in control of spot-market rates as the benefits of a bumper 2017 and 2018 help buffer airlines for the slack season,” FIS noted.

The global slowdown is being particularly hard on Asian airlines that depend so heavily on demand from the US and Europe. According to the Association of Asia Pacific Airlines (AAPA), the region’s airlines in May registered a 6.5 percent decline in air cargo demand measured in freight ton kilometers. At the same time, the average international freight load factor fell 4.3 percentage points to 59 percent for the month.

"Airlines are grappling with the effects of weaker air cargo demand, volatile oil prices, and renewed downward pressure on passenger yields,” he said.

The weak Asian cargo market could be seen in Cathay Pacific’s May figures. The Hong Kong-based carrier saw the volume of cargo and mail fall by just under 4 percent compared with the same month last year.

Ronald Lam, Cathay Pacific director of commercial and cargo, said the cargo business continued to be adversely affected by geopolitical tensions and its dampening of market sentiment.

“Despite positive capacity growth in May, cargo revenue saw negative growth over last year. Both volume and yield incurred decline year over year,” he said.

Citi’s economists are expecting global economic growth to be in the range of 2.9 percent year over year for both 2019 and 2020. However, the investment bank’s global trade war simulations suggest global growth could slow to a rate of 2 percent year over year in just 12 months if trade tensions escalate on a broad scale. Under such a scenario, the bank warned it would “dramatically” lower global growth forecasts.