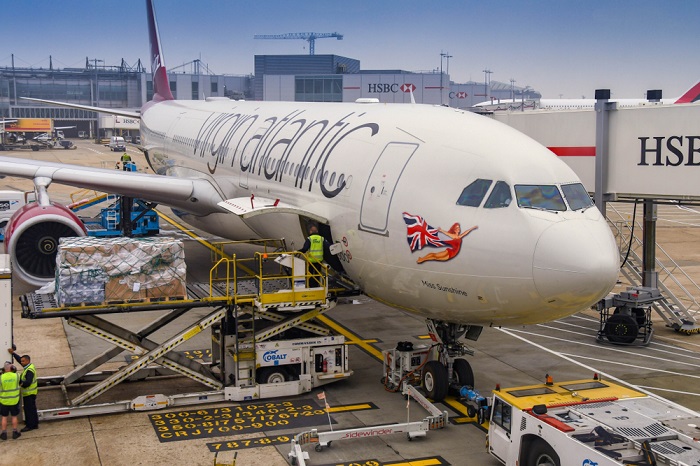 The two main regional markets for air freight – Asia-Pacific for international shipments and North America for domestic shipments — may be headed toward slower growth, due to the ongoing trade war between their two largest economies, Airport Council International said. (Above: Air cargo being loaded at London's Heathrow Airport.) Photo credit: Shutterstock.com.

Air freight growth worldwide continues to weaken in 2018 with June’s 2.3 percent year-to-date gain in air cargo down sharply from the 4.8 percent increase in the first half of last year, Airports Council International (ACI) reported.

The two main regional markets for air freight — Asia Pacific for international shipments and North America for domestic shipments — may be headed toward slower growth, due to the ongoing trade war between their two largest economies, the United States and China, Montreal-based ACI said in a statement.

“While ACI has found that passenger growth has continued to grow at a robust rate, the threat of increased economic uncertainty continues to loom over the air transport industry,” said Angela Gittens, director general ACI World.

“With the volatility around increased protectionism between major trading partners set to continue to the end of 2018, these barriers could stifle the flow of cargo even further,” Gittens added.

Further evidence of a slowdown

For air cargo, the peak season is traditionally October-November, but there is some doubt around that this year. IATA said in its third-quarter air cargo report that the inventory restocking cycle that helped air freight growth to outperform that of wider global trade in 2016 and 2017 has now run its course. The association said this slowing growth was coming against a backdrop of rising trade protectionism measures, and wider momentum in global trade was weakening.

Returning to the ACI report, Africa showed the strongest air freight volume growth, posting a 11.8 percent growth rate in the first half of 2018. Although Africa remains the smallest of the six global regions tracked, ACI said the growth trend could continue this year and top the 7.7 percent increase achieved in 2017.

Asia-Pacific’s air freight market saw its growth rate nearly cut in half through the first half of 2018, growing 4.4 percent after posting a 8.6 percent expansion in the first six months of 2017. Given the global context, the region is showing significant resilience, since it represents close to 40 percent of total global air freight volume, ACI said.

Also, Europe’s 3.7 percent air freight volume growth in the first half of 2018 was deemed “particularly strong,” according to ACI economists.

Meanwhile, the volume of air freight moving through airports in Latin America and the Caribbean “regained momentum after several years of stagnation,” showing 10.6 percent growth in the first half of 2018.

However, ACI said the Middle East showed no gains in air freight volume for the first half of 2018. The year-over-year decline worsened to negative 1.2 percent in June, from negative 0.9 percent in May. “There is no question that the air freight market is suffering from the current regional climate,” the airport council said.

According to Container Trades Statistics (CTS), inbound volumes into Europe rose 4.1 percent to 646,000 TEU in the first six months. However, the long-distance Asia-Europe route, which accounts for half of the European imports and 10 percent of global volume, was only up 1.3 percent in the first half, CTS data show.

Additional container shipping data confirmed the slowdown. On the trans-Pacific, according to numbers compiled by PIERS, a JOC.com sister product, volumes declined slightly in August, which is usually the first peak month of the holiday-shipping period. The above is attributed to shippers moving their cargo early to beat the first round of US tariffs on Chinese goods that were announced before the peak season began.