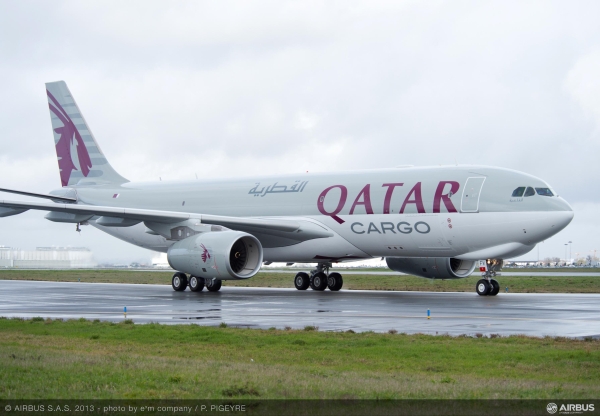 Qatar Airways has placed a firm order for five new Airbus A330-200 Freighter aircraft in an agreement signed at the Dubai Airshow 2013.

The Middle East’s leading airlines made clear their common determination to boost passenger and freight market shares this weekend at the 2013 Dubai Airshow as they dominated the headlines with a series of huge orders for new airplanes.

The region’s airlines are seeking to capitalize on their location between East and West and the parlous financial state of many rivals in Europe.

Boeing estimates Middle Eastern carriers will need 2,610 new airplanes worth an estimated $550 billion over the next 20 years. Some 900 of these aircraft will be used to replace existing fleets, but two thirds will be used to further expand networks.

Airbus, meanwhile, forecasts that Middle Eastern carriers will be operating 164 freighters by 2032, up from 61 at present.

In line with these projections, Emirates yesterday announced it has ordered 50 A380s, at a cost of around $23 billion, and confirmed orders for 150 of Boeing’s new 777 mini-jumbos in a $76 billion deal.

Despite global overcapacity in air cargo markets, Qatar Airways also signed a deal worth $2.8 billion at list prices for up to 13 A330-200 freighters including options, a sizeable addition to its existing fleet of three A330-200Fs. “We aim to be the best in everything we do, the air cargo market is no different, which is why we ordered the most modern and economic cargo aircraft available in its category,” said Akbar Al Baker, Qatar Airways CEO.

Etihad Airways also confirmed an order for 50 A350s, 36 A320neos and one A330-200 freighter as part of its expansion plans and efforts to improve operational efficiency and generate cost savings. The A330 mid-range freighter offers 70 tons of payload capacity and range of up to 4,000nm.

According to the latest figures from Airports Council International, the Middle East continues to see the fastest passenger and cargo growth rates.

The region as a whole saw 8.9 percent passenger growth in September, but hubs such as Abu Dhabi and Dubai expanded by double-digit margins compared to a year earlier.

The Middle East was also the only region to post gains in air freight traffic in September after posting growth of 2.9 percent year-on-year. Abu Dhabi reported a gain of over 27 percent in freight traffic for the month.