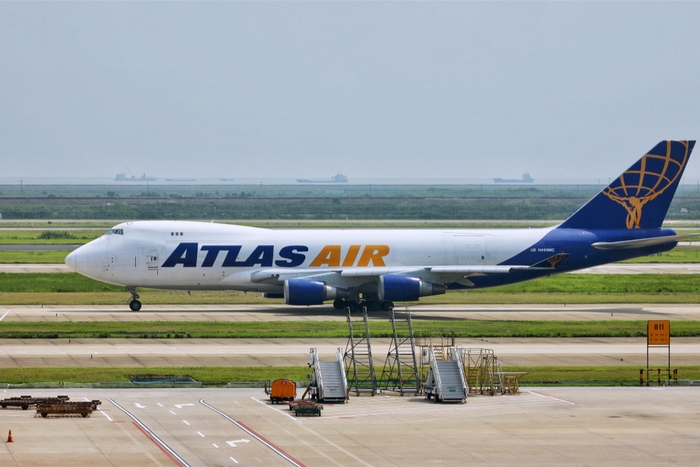 An Atlas Air B747 freighter on the apron at Shanghai Pudong airport. Rates from Shanghai to North America reached a five-year high this week amid rising demand for air cargo. Photo credit: Shutterstock.com.

Shippers will continue to face tighter air freight capacity and resulting higher rates for the next few weeks as the shipment of medical supplies and perishables in response to the coronavirus disease 2019 (COVID-19) fills up freighters and fast-shrinking belly capacity in passenger jets.

With widespread travel bans now grounding most of the global passenger fleet, removing 60 percent of air cargo capacity from the market, the task of keeping vital supply chains moving has fallen to the air cargo industry.

Data from the TAC Index, which tracks air cargo price trends on the major trade lanes, show rates from Shanghai to North America this week are up 70 percent compared with the same time last year at $5.70 per kilogram. Shanghai to Europe rates hit a five-year high and are 47 percent up year over year at $4.09 per kilogram.

“The sheer amount of passenger belly cargo lift that has been taken down means that the global freighter fleet is fully allocated and in high demand, and that is keeping global economies moving at the moment and directly saving lives as well,” said Michael Sheen, chief marketing officer for Atlas Air, the world’s largest provider of air freight capacity for charter and leasing.

Much of that demand is for food and crucial medical supplies, such as face masks, clothing, and respirators, that governments are importing from Asia for front-line health workers and a growing number of patients.

Alan Hedge, principal at aviation consultancy Hedge & Associates, said as the logistics chain adjusts and the crisis eases, so too will freight rates, but he said shippers were not likely to see much of an improvement in prices of in-demand products for at least another six weeks.

“I see a definite rush on freighter charters, but the problem is that a lot of capacity is already committed, so rates will definitely be very peaky for the next several weeks,” he said. “The speed of recovery in demand in the medium term will depend critically on fiscal stimulus decisions of governments all over the world, most importantly those of China and the US.”

Asked how demand was expected to hold up over the next few weeks, Sheen told JOC.com that many businesses have struggled with the rush on products as consumers stocked up for stay-at-home orders.

“Several industries are operating at a high gear at the moment — the pharmaceutical industry, manufacturing of anything related to medical equipment, and the food chain,” he said. “Just go into any supermarket in the world and you will see there is a shortage of something. So that means to resupply essential items for consumers, you have to use the transportation means that works, and air freight is going to be used to a higher degree in that regard.”

But there are concerns that with businesses in Europe and much of the US now closed and the public forced to stay at home, the high demand currently being experienced for air cargo could start to drop off.

Edoardo Podestá, COO of air and sea logistics for Dachser Group, said air freight out of China has been busy since late February, with rates rising steadily week after week. The Hong Kong-based executive told JOC.com that capacity is limited, and Dachser has been running charters to and from Shanghai and Hong Kong to Europe, as well as two-way charters on the trans-Atlantic.

“We have three more charters until the end of this month, two from PVG [Shanghai Pudong] and one from HKG [Hong Kong], plus one trans-Atlantic to ORD [Chicago O’Hare], which are fully booked and should remain so. But we start to see cancelations of some of the present bookings and we have very little demand for April, at least at a premium charter rate. I believe the peak we are seeing right now will be short-lived,” he said.

“My opinion is that there will be one more week, maximum two, of strong air freight demand fueled by general cargo plus emergency cargo, but if the lockdown in Europe continues and it is further extended in the US, before Easter the general cargo will decrease and the only cargo moving will be related to the health crisis and e-commerce.”

Reto Hunziker, group cargo director at charter specialist Chapman Freeborn, is also expecting several more busy weeks before any slow down with demand for commodities such as food items, pharmaceuticals, and medical equipment to stay high.

“If this continues for a while, we might face production stops in the US and EU, which might then result in much lower demand,” he told JOC.com.

Short-lived or not, much of the air cargo lift is being provided by charter companies, and Sheen said Atlas Air’s global charter fleet, the largest fleet of B747 freighters in the world, has all been deployed.

“The demand is on all trade lanes — trans-Pacific, intra-Asia, trans-Atlantic, North America-South America. There are a lot of consumer products and medical supplies being flown around, all inventories have been depleted, and that is what is now being filled and restocked,” he said.

Vladimir Zhukov, secretary general for The International Air Cargo Association (TIACA), highlighted the importance of keeping air cargo flowing in recent letters to the governments of Djibouti and Somalia calling on them to overturn a decision to ban all international flights, cargo included, for the next two weeks.

“In the current crisis, air freight is essential for the transport of food, basic necessities, and health related products — in other words, everything necessary for people to survive. The global economy also needs air freight to continue to supply businesses and factories,” Zhukov wrote.

With no people to carry following the grounding of much of the world’s passenger fleet, several airlines have turned their aircraft into mini freighters. American Airlines, for example, on Tuesday will complete the fourth round trip between the Dallas/Fort Worth and Frankfurt airports with one of its Boeing 777-300s, capable of carrying 50 tons of cargo. The plane is transporting medical supplies, US military mail, telecommunications equipment, other electronics to support people working from home, and e-commerce packages, American Airlines said in a statement.

Other airlines making use of their passenger aircraft to inject much needed capacity into the global air freight system include Cathay Pacific, Korean Air, and United Airlines.