Ari Ashe has more than a decade of journalism experience working in the busy newsrooms of Washington D.C. He earned two bachelor’s degrees at George Washington University and a master’s in broadcast journalism from Syracuse University. In 2006, he began his career with WTOP-FM in Washington D.C., a 24/7 all-news radio outlet. Beginning as a producer, he was the commuter transportation beat reporter from 2012 through 2015. He won an Edward R. Murrow Award for investigative journalism during the three-year stretch. In 2016, Ashe moved over to covering commercial transportation for Transport Topics, a publication of the American Trucking Associations, covering the business of trucking, railroads, and ocean carriers, including quarterly earnings reports and economic news affecting the industry. He joined the JOC in 2018 and reports on the Southeast US ports, intermodal, and trucking. 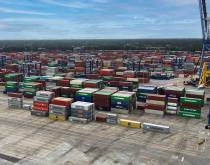 Eight vessels are now anchored off the Port of Charleston following the brief closure of a berth earlier this month and a stevedore labor shortage over the long Thanksgiving weekend.
MORE »

Construction has begun that would allow double-stack trains between Baltimore and Midwest cities such as Chicago, a major step in the Port of Baltimore’s effort to build its intermodal profile with...

The Port of Charleston is concerned about the cost of chassis for its new pool now due to launch in 2023, while negotiations to secure an agreeable price took longer than expected.

Port of Virginia to begin NIT rail expansion in February

The Port of Virginia is expanding the rail footprint of Norfolk International Terminals (NIT) to take advantage of import volumes that have grown at the fastest rate of any US Southeast port in 2021.

BNSF Railway and Union Pacific Railroad are concerned cargo owners will use trucks instead of trains in the ports of Los Angeles and Long Beach due to the Excessive Container Dwell fee.

UP, BNSF end metering from ports as inland congestion eases

The backlog of ocean containers clogging intermodal hubs in the interior US has eased considerably in the past three months thanks to limitations placed on rail volumes flowing inland from major...

While US chassis manufacturers have significantly ramped up production in the last six months, some marine and domestic chassis orders placed this year won’t be fulfilled into the second half of 2022.

Although there are still more than 20 vessels anchored outside of Savannah, the Georgia Ports Authority said terminal fluidity has greatly improved compared with two months ago.

While contract intermodal customers are realizing huge savings using rail this year, spot intermodal rates are not the bargain they were earlier in 2021.

Norfolk Southern will cut the free time for importers to pick up ocean containers at more than two dozen smaller-market terminals, while also raising storage fees.

UP is grading domestic intermodal customers on dwelling of equipment, street turns of containers, and use of appointments using a four-tier monthly report card.

PIL pulls back from brink of bankruptcy

Successful Omnichannel Strategies Are Built on the First 10,000 Miles of the Supply Chain
Download

Could Melio be key to post-corona success?
Download
END_OF_DOCUMENT_TOKEN_TO_BE_REPLACED