Truckload carriers did a better job at keeping drivers in the third quarter, but the annualized driver turnover rate remains high at large trucking companies, boosting operating and labor costs and making it more difficult for carriers to keep trucks moving. 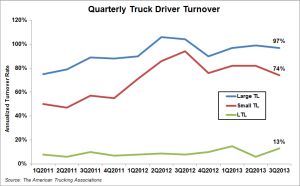 The turnover rate at large carriers dropped two percentage points to 97 percent in the quarter and fell eight points to 74 percent at companies with less than $30 million in annual revenue, according to the American Trucking Associations’ quarterly Trucking Activity Report.

“Despite this dip, the market for experienced, qualified drivers remains exceptionally tight,” said ATA Chief Economist Bob Costello. “I expect, as the economy continues to pick up, we’ll see that market get even tighter.”

Turnover occurs when truck drivers must be replaced, and high turnover rates mean carriers must hire drivers repeatedly with no net gain in employment. Most often drivers leave one carrier for another, seeking higher pay or more time at home, which means the same pool of qualified drivers circulates among carriers. A 100 percent turnover rate means truckload carriers need to replace the equivalent of their entire driver pool each year just to maintain capacity levels.

The cost of turnover for carriers is high. If the cost of hiring a driver averages $5,000, a company with 200 drivers and a 100 percent turnover rate would spend $1 million a year on recruitment alone. High turnover also makes it difficult for fleets to operate efficiently, maximize utilization of tractors and trailers and meet customers’ service expectations.

The driver turnover rate at less-than-truckload carriers, historically much lower, climbed from 6 percent in the second quarter to 13 percent in the third quarter.

Driver pay is too to low to

Driver pay is too to low to keep good drivers in truck. The Fed Gov. needs to set min. rates if dock pay and rates paid to the trucks and drivers at a fair wage while on U.S. and in Canada . A over the road driver needs to make twice the min. wage in Canada that is app. $21.00 per with overtime. 2262221429

How to Improve OTIF: 15 Tips for On Time and In Full Delivery
END_OF_DOCUMENT_TOKEN_TO_BE_REPLACED