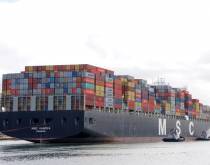 JOC Rankings: 2M Alliance atop carriers for US volumes

31 Aug 2021
Mediterranean Shipping Co. sat on top of the rankings for ocean carriers handling US imports while its 2M partner Maersk was top carrier on the export side.
MORE »

FMC to take deeper look at Evergreen detention case
28 Apr 2021
A detention case involving Evergreen Shipping, Yamaha Motor, and a drayage provider is drawing the attention of the Federal Maritime Commission, which is reviewing the application of its detention and demurrage rules.

Container lines ordered to explain detention, demurrage assessment
17 Feb 2021
The Federal Maritime Commission will take a deep look into the detention and demurrage practices in Southern California and New York and New Jersey, requiring ocean carriers and maritime terminal operators to answer questions about their policies related to importers and exporters.

FMC examining ocean carriers’ demurrage/detention billing
07 Oct 2020
The FMC will look into whether ocean carriers are incorrectly holding truckers, third-party logistics, and freight forwarders responsible for penalties that should be paid by the shipper.

Q2 results reveal an emboldened container shipping industry
21 Aug 2020
Container lines have displayed an ability to flex capacity in response to short-term demand changes, and this strategy has paid off across the board despite stunted volumes in the second quarter.

FMC rule giving contract filing relief to carriers takes effect
15 Jun 2020
The National Industrial Transportation League said its members do not rely on the publication of essential contract terms, eliminating the need for carriers to make such filings.

Ag shippers urge Trump administration to intervene on detention, demurrage
07 Apr 2020
A coalition of 80 agricultural shippers is urging the Trump administration to get involved in the detention and demurrage debate now before the Federal Maritime Commission, saying the issue is even more important now amid supply chain disruptions caused by the coronavirus pandemic.

Container carriers gaining greater control of market
24 Jan 2020
Carriers’ growing experience in reducing short-term capacity without having to resort to more disruptive actions like eliminating full services is a profound change in the market that will help the carriers absorb blows that in the past would wipe away profits like a dustrag.

ARO 2020: Trans-Pacific lines look to manage capacity, pass on fuel costs
24 Dec 2019
With growth in trade between Asia and North America projected to continue at a slow, steady pace in 2020, container carriers will be focused on keeping a floor on rates and recouping the added cost of low-sulfur fuels.

Maersk boosts profits, warns of tariffs slowing trade
15 Aug 2019
It was a modest second quarter result, but Maersk Line continues to improve its profitability by improving reliability and resisting any temptation to chase market share.

New strategies of CMA CGM, Maersk familiar, but bolder
12 Jul 2019
Carriers are going beyond setting up logistics arms and instead making the end-to-end reach a full company play rather than standalone attempt to offer the higher value and margin services as the NVOs they compete and partner with.

Trans-Pac spot rates rocket amid weak volume outlook
28 Jun 2019
Spot rates in the eastbound trans-Pacific this week got a pop from the pending July 1 GRIs, but economists are predicting a slow-growth year for the US economy, and carriers’ only hope to keep pricing from declining this peak season is to manage capacity through blank sailings.

Eyeing summer rush, carriers signal blank sailing restraint
29 May 2019
The Ocean Alliance’s announcement of three blank sailings in June puts carriers and BCOs on alert that additional cancellations are likely if shipments from China continue to drop in the coming months.

Little headway made on IMO ship speed plan
20 May 2019
A proposal to impose mandatory speed limits on ocean vessels faces an uncertain future after being tabled at last week’s meeting of the IMO’s Marine Environmental Protection Committee.

EU regulator raises concerns over state shipping subsidies
14 May 2019
The European Commission is eyeing Cosco’s deepening reach into the European port sector, as well as the broader issue of state subsidies to Asia-based carriers and shipyards.

Are they container lines or quasi-utility companies?