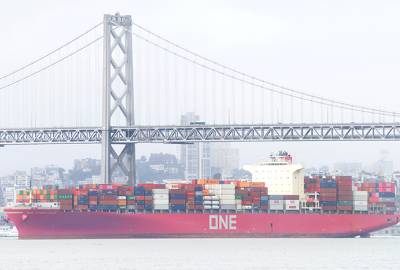 Container carriers in the slowing US import and export trades are exercising increased discipline, maintaining capacity levels rather than introducing new vessels in an attempt to secure a larger share of the market.
MORE » 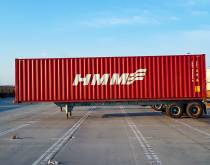 19 Jun 2020
HMM will be switching from BNSF Railway to Union Pacific Railroad in August, a move that allows it to prioritize efficient inland movement of containers within THE Alliance.
MORE »

Apathy hampers blockchain in shipping
29 Jan 2019
New research shows blockchain technology has a way to go before convincing the majority of enterprises of its near-term value.

CEVA Logistics argues larger upside to CMA CGM deal
28 Jan 2019
CEVA Logistics wants shareholders to bear in mind the benefits of its strategic partnership with CMA CGM and turn down a bid by the carrier, highlighting the growth inherent in the company.

Low-sulfur costs hamper trans-Pacific contracting
24 Jan 2019
This lack of clarity on future high- and low-sulfur fuel costs worries BCOs and NVOs as they enter the more critical second phase of negotiations in March.

Infographic: The layers of logistics technology
24 Jan 2019
While blockchain has captured the imagination of the logistics world, it's important for most to focus on the application layer (actual solutions) and not so much on the underlying structure.

Value-added services in shipping take shape
23 Jan 2019
Shippers are starting to see the beginning of the pipeline of value-added services, but the rollout won’t make a splash like the deployment of a mega-ship.

Infographic: Trans-Pacific shippers' 2019 outlook
23 Jan 2019
The annual survey of shipper views on the most important issues in the trans-Pacific trade.

Infographic: Is blockchain for shipping necessary?
22 Jan 2019
Shippers have largely struggled to understand the benefits blockchain technology brings to their supply chain and at what cost.

Unreliable ocean service cramps Europe shippers
15 Jan 2019
“If a carrier comes with a 30-day transit and they suddenly change to 40 days, we need to know about it one month in advance,” a shipper of medical products said.

Shippers too reliant on container lines for tracking
14 Jan 2019
Shippers' conundrum: if carriers are poor at arriving on time, why do shippers believe those carriers will be better at providing data in a timely manner, much less a predictive one?

Bumpy year ahead for container shippers
10 Jan 2019
If there was ever a year when the outlook for reliability in the system was more clouded, 2019 and into 2020 would take the prize.

Tough road ahead for freight data standardization
08 Jan 2019
Fissures have appeared, ranging from member frustration in standards-setting organizations to deeper concerns about the viability of the technology in the container shipping space.

2M first with Lunar New Year sailing cuts
08 Jan 2019
Carriers among the other two alliances are expected to announce their own blanking programs.

Tariff talks spark trans-Atlantic trade uncertainty
07 Jan 2019
Increasing use of the available capacity in both directions and the impact of service shifts in 2018 could mean shippers find it more difficult to find carrier space for containers this year.

Freight shipping certainties for 2019
03 Jan 2019
Here are a few certainties shippers and their transportation providers can bank on for 2019.

Asia-Europe carriers push surcharges on rate rally
03 Jan 2019
The surcharges and rate increases are coming in hot as 2019 gets under way, with carriers trying to keep prices up into the Lunar New Year peak.

Sealand nudges digital bookings via manual fee
14 Dec 2018
It's the latest sign of an ocean carrier strategy of trying to cut costs by pushing shippers to secure slots digitally.

Viability of instant quotes from container lines?
12 Dec 2018
Two variables shippers will have to determine that will likely influence the instant quote practice’s acceptance/rejection are — will the shipper's business model benefit from an instant quote and an immediate booking? And how much of a premium are shippers willing to pay to obtain them?

Confirmed container bookings offer BCOs peace of mind
07 Dec 2018
The new tools provide peace of mind for a segment of shippers who want web-based booking tools, and also offer a path to value/service differentiation for ocean carriers. But what happens to the value proposition of NVOs and their decades-long relationships and nuanced, specialized services?

Market share-hunting HMM hints at 2M renewal talks
06 Dec 2018
HMM is trying to reverse a loss trend that most recently saw it post a $147 million net loss in the third quarter, which it blamed on high fuel prices.

CMA CGM joins instant quote effort via Freightos platform
05 Dec 2018
CMA CGM is the first carrier to participate on the marketplace hosted by Freightos, a technology startup that until now only provided aggregated rates to forwarders.

Maersk calls for aid to be carbon-neutral by 2050
05 Dec 2018
Container shipping is at a key point in its pursuit of carbon neutrality, and Maersk wants industry help in cleaning up the business.

Value of blockchain consortiums questioned
04 Dec 2018
Tyler Smith, director of Viant, a blockchain-based supply chain modeling software company, said consortia have not proven their value, so far, but hopefully they will. He added that consortia are a way to get people involved.

Maersk speeds up service to harness Montreal gains
03 Dec 2018
Maersk Line will stop at the port of Montreal only, and no longer the port of Halifax, on its route linking Canada to Europe, to speed up transit times.

A strategy that will reduce empty container costs