In 2017, the 25 largest less-than-truckload carriers in the US increased their combined revenue 7.8 percent, as higher industrial production and disciplined pricing raised their topline. That sizable gain followed a flat year for LTL revenue in 2016 and a revenue drop of 0.5 percent in 2015, as freight demand tumbled in the latest slowdown in the long-running economic recovery.

The US economy grew at a faster rate in 2017, and strong industrial production helped create more pallets of goods to fill LTL terminals and trailers. The combined revenue of the 25 largest LTL carriers in the US reached a new record of $34.5 billion. Just two LTL carriers reported less revenue year over year in 2017, compared with 10 in 2016 and 12 in 2015.

Some of the fastest-growing LTL carriers, however, weren’t on the list. The smaller LTL and cartage companies that didn’t make the Top 25 grew faster as a group than their larger competitors, increasing combined revenue 8.5 percent to $3.2 billion. That revenue would make those small companies the fourth largest LTL carrier if they were one trucking company.

J. Harwood Cochrane: Present at the Birth of Trucking 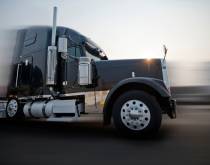 26 Jan 2022
Proactive steps taken by US and Canadian motor carriers and shippers ahead of vaccine mandates for truck drivers are keeping cross-border freight flowing despite earlier fears of disruption and delays.
MORE »

Omicron adding to trucking capacity woes
06 Jan 2022
The fast-spreading variant of COVID-19 likely won’t affect trucking as much as warehousing and aviation, but its indirect impact will put more pressure on already high trucking costs.

Central Freight shutdown adds to LTL pressure
13 Dec 2021
LTL shippers that used Central Freight Lanes should expect their transportation costs to rise in a tightening market in the wake of the Texas-based carrier’s sudden closure.

Transportation hiring, but not trucking, surged in November
07 Dec 2021
The for-hire trucking industry lost jobs in November, as it typically does, but fewer than anticipated as couriers and warehouses grabbed the most new employees amid strong pre-holiday demand.

Knight-Swift expands LTL presence with Midwest carrier buy
06 Dec 2021
The largest US truckload operator acquired its second LTL carrier this year, bringing it closer to a national network and more than $900 million in LTL revenue.

Saia builds LTL volume, expands terminal network
02 Dec 2021
The ninth-largest LTL carrier is in a race to build out its network capacity as more freight and heavier shipments hit its docks.

US transportation hiring exceeds expectations
05 Nov 2021
Bigger than expected gains in warehousing and trucking in October are welcome amid ongoing reports of labor shortages.

US vaccine mandate to impact truck rates, capacity
05 Nov 2021
The Biden administration’s COVID-19 vaccination and testing mandate for large employers will affect truck capacity and pricing, but questions about the extent of its impact remain.

Small trucking firms ‘bullish’ on 2022: survey
04 Nov 2021
A survey of independent truckers and small trucking firms by Truckstop.com and Bloomberg Intelligence found them optimistic about the potential for higher contract and spot rates next year.

Survey highlights challenges of truck driver COVID-19 vaccinations
03 Nov 2021
A truck driver survey underscores the threat of potential service disruptions from an upcoming US vaccine mandate for large employers, with 36 percent of drivers showing no interest in vaccination.

Vaccine mandate for large US companies may snap supply chain: truckers
02 Nov 2021
Trucking companies are seeking an exemption to the COVID-19 vaccine mandate being implemented by the US government for large employers, which they say would further disrupt already tight US trucking capacity.

LTL carriers ‘right size’ networks for higher profitability
29 Oct 2021
With less-than-truckload demand high and capacity tight, TFI International is clawing back its US LTL network to improve freight and lane density and profitability.

Disruption creates opening for dynamic LTL pricing
28 Oct 2021
Tight LTL capacity and rates that have climbed by double digits are creating opportunities for more dynamic LTL pricing, if it can be shown to benefit shippers and carriers.

Falling heavy truck deliveries imperil capacity expansion
26 Oct 2021
The ongoing semiconductor shortage is reducing deliveries of new trucks in North America and threatening the addition of much-needed capacity in 2022, and perhaps beyond.

Supply chain disruption drags truck, trailer capacity into 2022
27 Sep 2021
Trucking equipment manufacturers are raking in new orders for trailers and tractors, but it may be well into 2022 before they roll off production lines ready to move freight.

ODFL offers vaccine incentive to protect drivers, capacity
07 Sep 2021
Less-than-truckload carrier Old Dominion Freight Line hopes to counter the threat of COVID-19 to its own employees and its customers with a financial vaccination incentive.

Technology creating LTL capacity for XPO shippers
03 Sep 2021
Rather than adding terminals, XPO says it is deploying technology to better utilize existing space in its trailers and speed trucks, effectively expanding the capacity it can offer customers.

Uber Freight, BlueGrace link up to deliver LTL capacity
15 Jul 2021
Digital broker Uber Freight is expanding its truckload platform to encompass LTL, as strapped US shippers turn to LTL carriers and 3PLs such as BlueGrace for capacity.

How the market for US truck drivers will fare, moving foward