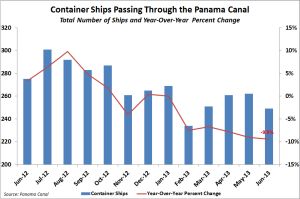 The number of container ships passing through the Panama Canal fell 9.5 percent in June compared with a year earlier, the third consecutive month of accelerating declines.

According to data from the Panama Canal, 249 container ships passed through the canal last month, 26 less than in June 2012. It was the second-lowest month of the year for container ship transits, eclipsed only by February's 234 ships when trade typically slows in the aftermath of Chinese New Year. It also came after year-over-year declines of 7.8 percent in April and 9.0 percent in May.

Container ship transits in June also were down 5 percent from the previous month, following three consecutive month-over-month increases. In the first half of 2013, 1,526 container ships passed through the Panama Canal, down 6.8 percent year-over-year.

The total number of all ships — including general cargo, reefer, dry bulk, crude and chemical tankers, liquid gas carriers, container, roll-on, roll-off and passenger ships — passing through the canal in June fell roughly 11 percent to 904 from 1,013 a year earlier. This is the lowest monthly ship total since the JOC began collecting this data in January 2010. Ship volume hasn't increased year-over-year for nine months. Ship transits were down 8.5 percent from 988 in May. Year-to-date through June, 5,933 ships sailed through the canal, down 7.8 percent year-over-year.