Maersk Line is the world’s largest container ship operator. A unit of the A.P. Moller-Maersk Group, it is based in Copenhagen, Denmark, and has offices around the world.

In 2018, A.P. Moller – Maersk and IBM announced plans to create a joint venture aimed at offering a global trade digitization platform by using blockchain technology. The platform will be designed for use by the entire global shipping ecosystem and address the need for greater transparency and simplicity in the movement of goods across borders and trading zones.

Maersk and IBM said that the platform would be designed for use by the entire global shipping ecosystem – not just by Maersk and IBM.

How to Improve OTIF: 15 Tips for On Time and In Full Delivery
END_OF_DOCUMENT_TOKEN_TO_BE_REPLACED 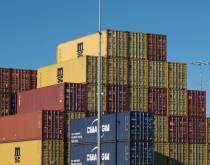 21 Jun 2022
Ocean carriers have been looking at how to provide more export capacity to US ag shippers to head off scrutiny from regulators, but OSRA will now put those efforts under a hotter spotlight.
MORE »

Maersk gives 2022 earnings guidance big boost on rising rates
26 Apr 2022
Maersk has signaled that another exceptionally profitable year is on tap after the carrier dramatically upped its 2022 earnings forecast.

Maersk, GCT settle suit over New York terminal berthing deal
05 Apr 2022
Maersk and GCT New York have settled a lawsuit over the switch of three vessel services to APM Terminals that GCT alleged was a breach of contract.

FMC probing major liners, ‘pop-up’ carriers on US export service
22 Mar 2022
The Federal Maritime Commission is adding the availability of export capacity to its ongoing scrutiny of how ocean carriers are operating in the US.

Maersk subpoenaed as part of US supply chain ‘investigation’
15 Mar 2022
The Justice Department’s probe of the US supply chain comes amid increased pressure from the Biden administration to more closely monitor container line pricing activities in the wake of historic rate levels.

Maersk selling stake in major Russian terminal operator
11 Mar 2022
Maersk is selling its stake in a publicly traded Russian ports operator whose market value has plunged in recent weeks owing to the war in Ukraine.

Maersk plans to connect supply chains at the ‘middle’
16 Feb 2022
The Pilot Freight acquisition gives Maersk not just last-mile delivery capabilities, but the “middle-mile” backbone needed to speed freight to the final mile.

Maersk to debut new Houston, Norfolk trans-Pac service in March
10 Feb 2022
Maersk introduced a new vessel service from Asia that will call on the US Gulf and East Coast and plans to provide its first direct service from Indonesia to the US.

US resin shippers face spotty service as exports grow
10 Feb 2022
US resin exporters are finding a much tougher shipping market to start 2022 as export gateways deal with unreliable vessel schedules and tight capacity.

Outlook 2022: Houston port pushes infrastructure plans to keep ahead of growth
13 Jan 2022
Houston is seeing a surge in imports thanks to the upsizing of vessel services from Asia as other Gulf Coast ports look for a similar uplift.

Outlook 2022: Carriers to spend historic profits under close shipper scrutiny
10 Jan 2022
With no sign of relief in the high rate-low value container shipping environment, shippers on the major trades will be hoping the newfound prosperity being enjoyed by carriers results in a vast improvement in service levels.

Outlook 2022: Asia–Europe lines capitalize on shipper pursuit of capacity over price
07 Jan 2022
After 18 months of chaotic supply chains, cargo owners are searching for stability as they look ahead into 2022.

Investment options abound for container lines riding profit windfall
03 Dec 2021
Liner carriers find themselves in the unusual position of having cash to both repay debt and invest in a range of ways, from new ships to technology to strategic acquisitions.

Maersk continues logistics expansion with Grindrod tie-up in South Africa
15 Nov 2021
Maersk’s joint venture with Durban-based forwarder and terminal operator Grindrod — along with other recent purchases and partnerships — could be the start of a splurge of similar deals as a cash-rich Maersk strengthens its global logistics footprint.

Maersk cites ‘persistent congestion’ in third profit upgrade of 2021
16 Sep 2021
Maersk issued its third upgrade of full-year 2021 results thanks to the continued strength of its ocean business and high freight rates.

Maersk charts decarb path with methanol-powered ship order
24 Aug 2021
Maersk’s order of up to twelve 16,000-TEU methanol-powered ships raises the question of how other container lines will follow, as some carriers are betting on LNG to meet tightening emission restrictions and others are waiting to see how best to shift away from traditional bunker fuel.

PSA picks up Maersk call in India
12 Aug 2021
Maersk has shifted its call at Jawaharlal Nehru Port Trust (JNPT) on the India/Middle East–Mediterranean ME2 service to the PSA-operated BMCT after increasing vessel capacity on the loop to an average of 10,000 TEU.

Maersk boosts 2021 profit outlook by about $5 billion
02 Aug 2021
Maersk upgraded revenue and profit expectations for the full-year 2021 as it sees a better-than-expected demand for trans-Pacific shipping.

Cyclone-related port closures compounding pressure on India trade
19 May 2021
Most of India’s cargo gateways reopened Tuesday morning, but carriers tell JOC.com it will take them at least until the end of the week to clear the backlog of vessels that built up over the weekend.

Extra-loader vessels easing India–US capacity pressure
17 May 2021
Hapag-Lloyd has announced three ad-hoc sailings between the Indian Subcontinent and the US East Coast in May and June to feed a resurgent market for US imports from India, Bangladesh, and Sri Lanka.

Maersk doubles profit outlook on trans-Pacific demand, rates
26 Apr 2021
Maersk upgraded revenue and profit expectations for the first quarter and full-year 2021 as it sees a better-than-expected demand for trans-Pacific shipping.

Maersk welcomes pressure to hasten decarbonization moves
07 Apr 2021
Maersk is feeling pressure from customers and investors to decarbonize its operations, but the carrier says that pressure will bring the transparency needed to help accelerate its drive for carbon neutrality.

TPM21: CMA CGM to deploy first LNG ships on US-Asia trade in 2021
25 Feb 2021
With the deployment of LNG-powered ships in the trans-Pacific trade, CMA CGM is banking on North American shippers taking greater interest in the carbon output of their supply chains in the coming years.